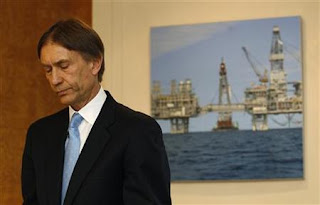 It is always sad when experienced and well trained men have a lapse in judgment.  We will never know what actually contributed to the lapse, but it should not have been even exhaustion.

There is nothing more critical to a driller than the certainty of well integrity.  This is a mistake that almost could not be made, yet it was made.  It is like picking up a gun and not breaking it open.  It is not supposed to happen.

As mentioned here, the blow out preventer even working would not have prevented the explosion.  At least that source can be tossed away although it certainly shows up a huge problem in training or procedures.  Obviously were you find one blind spot, it is certain that others existed and in this case that big other was apparently well integrity.

In this case, the test worked and indicated a problem with well integrity.  The workers or whoever proceeded anyway and squeezed the trigger.

(Reuters) - BP had workers on the doomed Deepwater Horizon rig who could have prevented the missteps that led to the massive Gulf of Mexico oil spill, but they were not consulted, the White House oil spill commission said on Thursday.

In an expanded report on the causes of the BP drilling disaster that killed 11 workers and ravaged the Gulf coast last summer, the commission released new details about the events that preceded the BP accident.

The commission's investigators said BP workers failed to ask a knowledgeable company engineer who was visiting the rig about unexpected results from a critical negative pressure test on the rig.

"If anyone had consulted him or any other shore-based engineer, the blowout might never have happened," the commission said in a statement.

The rig crew's misreading of that pressure test and the decision to move ahead with temporary abandonment of BP's Macondo well was a major catalyst for the April 20 rig explosion that eventually unleashed millions of barrels of oil into the Gulf of Mexico.

Had BP's well site leaders brought their faulty explanation of the test results to either of the visiting engineers, "events likely would have turned out differently," the commission report said.

The two engineers who were visiting the rig that day said they would have insisted on further testing, had they been consulted.

"The sad fact is that this was an entirely preventable disaster," the commission's chief counsel, Fred Bartlit, said in a statement. "Poor decisions by management were the real cause."

Created by President Barack Obama during the BP oil spill, the commission released its major findings and recommendations last month.

While the commission does not have the authority to enact policy or take punitive action, the panel's findings could affect future criminal and civil cases related to the spill.

Other new details released in the report include the finding that BP knew that there were issues with Halliburton and its work years before the accident.

The commission previously criticized Halliburton's cement job on the rig, saying the company may have completed the job before knowing its cement formula was stable.

The new report said BP's engineers had problems with the Halliburton engineer assigned to the Macondo well for years, but they still did not review his work carefully.

In addition, the flow of oil and gas that led to the explosion "almost certainly" came through an area of the well where Halliburton's cement should have blocked the flow.

Another key finding was that any flaws in the blowout preventer were not the root cause of the explosion.
Some Republicans criticized the commission's findings because the panel never examined the blowout preventer, which they say could have possibly contributed to the accident.

The rig crew did not activate the blowout preventer until hydrocarbons had already flowed by it, however, the report said. "Even if the BOP had functioned flawlessly, the rig would have exploded and 11 men would have died," the report said.

Transocean Ltd, which owned and operated the Deepwater Horizon rig, was also accused in the report of missing several signs that hydrocarbons were in the riser pipe of the rig prior to the blowout.