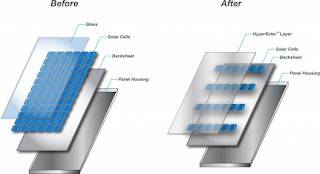 This item refreshes our appreciation of the concentration aspect of solar light energy conversion.  The cells themselves merely capture a narrow fraction of the spectrum and concentrating those portions of the spectra into a high efficiency cell is an obvious strategy that is normally deployed with thermal systems.

Doing it with photovoltaics is an obvious system booster and manufacturing methods may now be up to the challenge.

An important economic consideration is the output per square foot of installed engineered structure.  I suspect that they mean to increase that ratio four fold using this method.  If true it will be a major leap in overall energy efficiency that is not dependent on the present research lines which has been singularly unimpressive in advancing solar technology despite a plethora of fundamental discoveries. 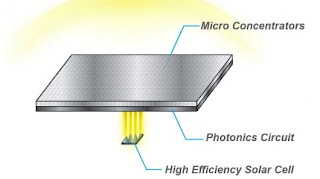 HyperSolar intends to produce a thin, flat, clear solar concentrator, that could boost the amount of sunlight reaching solar cells by up to 400 percent (Image: HyperSolar)

Solar cells are the most expensive part of a solar panel, so it would follow that if panels could produce the same amount of electricity with less cells, then their prices would come down. In order for panels to be able to do so using existing cell technology, however, they would need to get more light to the fewer cells that they still had. Mounting the panels on the end of vertical poles to get them closer to the sun is one possible approach, that might work in the town of or on Gilligan’s . A better idea, though, is to apply a clear layer of solar concentrators to the surface of a panel – and that’s just what HyperSolar intends to do.

The company claims that it has just completed the prototype design of “the world’s first thin and flat solar concentrator for direct placement on top of existing solar cells.” Each sheet will contain a matrix of optical concentrators that are capable of collecting sunlight from a variety of angles. Beneath those concentrators will be a “photonics network,” that will channel light from all the collection points on the top to concentrated output points on the bottom. This network will also able to separate the sunlight into different spectrum ranges, so that specific ranges can be sent to specific cells designed to absorb them.

The sheets will also incorporate a photonics thermal management system that will keep unusable parts of the solar spectrum from reaching the cells. This should keep the cells from overheating, and becoming less efficient.

HyperSolar’s next step will be to produce an actual physical prototype, and see if it works as envisioned. We’ll keep you posted ...