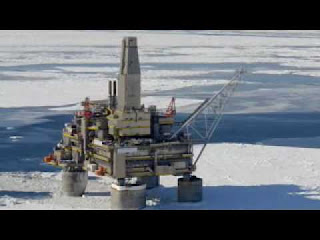 The great truth about the offshore oil resource is that we simply are never going to need it.  Without waxing on about the difficulties, today we have started to open up the huge continental reserves unaccessed before with horizontal completion technology that can now recover as much oil as was ever pumped easily.

While that ramps up over the next few years the advent of the three hundred mile range battery will end the use of oil as an automobile fuel slashing demand everywhere.

The age of oil will end in a flood of unsalable oil.

All this is eminent and ’s offshore oil will be too late and too costly and too dangerous.

The next great depression will be global and it will be brought on by the demise of the oil industry.

(CNSNews.com) – A new study says drilling on ’s Outer Continental Shelf (OCS) could make the eighth largest oil resource province in the world -- ahead of , , and .

The report -- by the consulting firm Northern Economics and the University of Alaska-Anchorage’s Institute of Social and Economic Research -- says that developing Alaska’s OCS could produce almost 10 billion barrels of oil and 15 trillion cubic feet of natural gas, create around 55,000 new jobs and produce $145 billion in new payroll nationally, generating a total of $193 billion in government revenue through the year 2057.

A senior policy advisor with the American Petroleum Institute, the trade group for hundreds of U.S. oil and gas producers, said in a statement about the study that offshore drilling for oil and natural gas can help with the country’s energy and economic needs.

“America will need all forms of energy to get our economy back on track, and that includes oil – we can either produce it here and create more American jobs or import it and create jobs elsewhere,” Richard Ranger said. “The administration and Congress need to adopt an‘all of the above’ energy approach that leverages our offshore resources in to create an energy plan for that boosts, rather than inhibits, our economy.”

About 77 percent of world oil reserves are owned or controlled by national governments and the currently imports over 60 percent of its crude oil, according to API. The Northern Economics-University of study estimates that Arctic offshore development could cut imports by about 9 percent over 35 years.

Crude oil prices in broke through the $100-a-barrel threshold on Thursday, with rising prices linked to the unrest in the Middle East, including and its vast oil reserves.

The Post reported on Thursday that pump prices for regular gasoline jumped 4 cents a gallon overnight to $3.23, an 8-cent-per-gallon increase in the past week and 55 cents more than a year ago.

“Given the current political turmoil in the Middle East and increased demand from a slowly growing economy, it is more essential now than ever before that we develop ’s OCS to increase domestic production,” Ranger said. “Increased OCS production in would also extend the operating life of the 800-mile Trans-Alaska Pipeline System (TAPS), a critical lifeline of domestic energy for .”

Escopeta Oil & Gas ()
Andex Resources ()
Savant ()
UltraStar ()
Alyeska Pipeline Service Company
Alyeska is responsible for operating and maintaining the Trans-Alaska Pipeline System (TAPS). The company was formed in 1970 and acts as agent for five companies which own the pipeline: BP Pipelines (Alaska), Inc. 46.93%, ConocoPhillips Transportation Alaska, Inc. 28.29%, ExxonMobil Pipeline Company, 20.34%, Unocal Pipeline Company, 1.36%, and Koch Alaska Pipeline Company, LLC, 3.08%. Alyeska directly employs about 800 people with a total of 1,600 direct and indirect employment associated with the pipeline.
The 800-mile, 48-inch pipeline is one of the largest pipeline systems in the world. In what it calls strategic reconfiguration, the company has upgraded the pipeline’s pump stations and control systems to enhance overall pipeline safety and reliability. Alyeska has successfully transported more than 16 billion barrels of oil to market.
The American Petroleum Institute awarded Alyeska its 2008 Distinguished Operator Award, which is among the oil industry’s top honors and is reserved for pipeline operators that demonstrate excellence in safety, environment and integrity.
Refiners
Flint Hills Resources (North Pole)
Petro Star, Inc. (North Pole, )
Tesoro Alaska Company (Nikiski)
Web Links
Sources

In 2009, Northern Economics, Inc. and the Institute of Social and Economic Research at the University of Alaska Anchorage released a study that was commissioned by Shell Exploration and Production describing the potential economic benefits to the State of Alaska and local governments from developing oil and gas resources in ’s Outer Continental Shelf (OCS) areas, particularly the Beaufort Sea, , and the .

The benefits of potential OCS development in extend beyond the state however—OCS leases generate direct revenues to the federal government and the increase in economic activity associated with exploration, development, and production of OCS oil and gas resources would also generate jobs, income, and additional tax revenues to the rest of the nation. This study quantifies these other economic benefits beyond , focusing on estimated government take and employment effects on the rest of  the nation. This follow-up study only considers development in the Beaufort Sea and the Chukchi Sea OCS; no activity is anticipated in the . On March 3, ,2010, the Secretary of the Interior Ken Salazar announced that as part of the Obama Administration’s plan for the protection of special areas like the Bristol Bay in , the planning area () would be withdrawn from consideration for oil and gas development through 2017 ( Department of the Interior, 2010).

The following key findings are based on a reasonable set of exploration, development, and production scenarios developed in the 2009 study for the Beaufort and Chukchi OCS areas.

 Commercialization of oil and gas resources in the Beaufort OCS and the Chukchi OCS, could generate $97 billion and $96 billion (in 2010$), respectively, in revenues to federal, state, and local governments, over a 50-year period.

Table ES-1 and Table ES-2 summarize the estimated cumulative potential government revenues by entity and by revenue category accruing from exploration, development, and production activities in the Beaufort OCS and the Chukchi OCS, respectively. The values are expressed in 2010 U.S. dollars

Table ES-3 summarizes the potential employment effects in and the rest of the nation of exploration, development, and production activities in the Beaufort and Chukchi OCS areas.

Table ES-4 summarizes the results of the sensitivity analysis showing the effects of varying market prices for oil and gas on potential government revenues. As shown in the table, estimated government
1 View the complete 2009 report at: http://www.northerneconomics.com/ShellOCS.
2 The original study presented results in 2007 dollars. All the figures in this report are in 2010 dollars
Posted by arclein at 12:01 AM