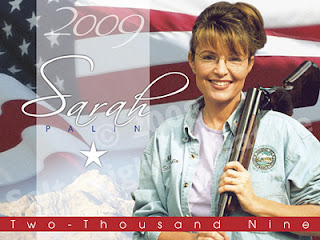 It is certainly worthwhile to pander to ’s fears of the apparent threat presented by the rise of ’s military.  On the other hand, they hardly need any help there from Sarah.

The actuality of the threat is and will remain thin.  Those wonderful acquisitions come under the heading of toys for the boys and should be dismissed as such.  What wants is peaceful frontiers without unpleasant intrusions by even their best friends where they lose control.  This could easily happen over , but only there.  Been able to at least growl is their only safe option.

I find it much more amusing that she called out her own party as sheep.  This is really a challenge to political correctness and always timely.

The real point is that everyone in the world knows she is running for president and if she can stir up some controversy, then so be it.  Too bad there is a war on over in to down her out.

At this point she is stimulating the Republican party to come out fighting.

NEW DELHI (AP) — U.S. politician Sarah Palin stressed the importance of America's ties with India, saying they were based on the shared values of freedom and free-market capitalism, while sounding a warning note on China's rise during a speech Saturday in New Delhi.

The visit to is a rare foreign venture for the ex-Alaska governor and reality TV star, who was John McCain's running mate in his failed 2008 campaign for president. The trip, which also includes a stop in , is raising speculation Palin wants to burnish her foreign policy credentials ahead of a possible 2012 presidential run.

Palin told a well-heeled audience of Indian business leaders, professionals and socialites that U.S.-Indian relations were "key to the future of our world."

"We're going to need each other, especially as these other regions rise," she said, in an apparent reference to , during a Q&A that followed a keynote speech titled "My Vision of ."

"Free people in a free country don't wage war on another country," she said. "I want peace on Earth."

She questioned the Chinese military's ascent, saying the Communist country's stockpiling of ballistic missiles, submarines and "new-age, ultramodern aircraft" seemed unjustified when it did not face an outside threat.

"What's with the military buildup?" she said. "'s military growth can't just be for defensive purposes."

Reporters who had been assured access were barred at the last minute. But the speech was shown on Indian television and in a live webcast.

Palin was coy about whether she planned to run for the White House, but at times sounded like she was campaigning. She took a swipe at President Barack Obama and what she described as his "dithering" response to the political upheaval in the , saying he "should have done more for Arab protesters."

Obama visited in November during a wider Asian tour, affirming the country's growing importance on the global scene.

Palin said the Republican Party's apparatus was at times frustrating to deal with, but said presidents Ronald Reagan and Abraham Lincoln were role models and reasons for why she joined the party.

She also took aim at one of her favorite targets, the media.

She accused them of failing "to set the record straight" and joked that they willfully cost her and McCain the 2008 election. Palin also suggested the race might have turned out differently had she been at the top of the ticket instead of McCain, but quickly insisted, "I'm joking."

"I will not sit back and take media criticism," Palin said. "Too often, Republicans, I don't know, they kind of have the fighting instinct of sheep."

Palin is due to meet with Israeli Prime Minister Benjamin Netanyahu during her visit to the Jewish state.

© Copyright 2010 The Associated Press. All rights reserved. This material may not be published, broadcast, rewritten or redistributed.

Rod Serling, the writer, director and producer of the popular weekly show called “The Twilight Zone” would appear on camera as the narrator and would say that we all live in a world of imagination and can easily take a wrong turn and step off into the “Twilight Zone.” Little did we know then that Mr. Serling was describing the future post 9/11 world of political correctness. Thus, if he were alive today his narrative would read something like this:
Your are in the Twilight Zone. This is the world of fantasy where terrorists are called “militants” and the war against terror is not a war against the fundamentals of Islam, but a war against a small minority of one hundred million fanatics who “hijacked a peaceful religion”. This is the world of bizarre twists and convoluted turns where murderers and thieves are rewarded with the property of their intended victims and the “road map to peace” requires total surrender to homicidal lunatics.
This is the world beyond reality where atheists pray to themselves in the “Church of Non Belief”. This is the world of imagination in which the officiators of marriages declare, “I now pronounce you husband and husband.” This is the world of denial where threats of genocide are met with open borders and entitlements for all who chose to enter that “unseen” place in the realm of human reflection where right is wrong and left is right. More at http://moshesharon.wordpress.com