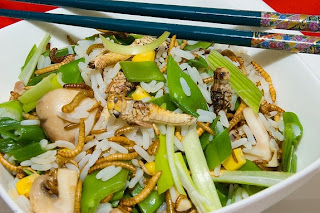 We all know that this idea is not going to sell well but the fact it that we have not really tackled the possibilities at all.  After all, simple maggots growing on good food produce a good tasting product.  So insect husbandry will turn out to be a piece of cake compared to everything else we have domesticated.

What needs to be done is to explore the multiple species to locate optimal characteristics first, instead of long after an industry is established.  I have already suggested that human waste processing through a maggot culture that captures the maggots upon emergence may be very practical. These can then be cleaned up and made into a high quality chicken feed.

The important idea is to master the art and adapt it into our animal food chain to produce a high quality end product.  Chicken, fish and swine feed are all excellent beginnings.  None of these need any special insect upgrades to make suitable for human consumption.

I think that while we do have folks eating insects per se it will never be easy to popularize unless we can produce a shrimp like meat product which should not be too hard.  We will have to give it a strange name to make selling easier.

The natural efficiencies of an insect culture will provide an economic advantage that will tell in time.  Recall that the present hugely expanded fish supply is now fifty percent produced by aquaculture already and that was done in the past forty years.  The next forty years will bring it up to over ninety percent and the unit cost will continue to decline.

There is a natural limit to how much beef we can produce, although it is far higher than anyone can imagine, but as our capacity to water the arid zones and do other climate modification, the cow will naturally need to be used more sparingly, yet more persuasively.  I include other ruminants and ungulates in that mix as a key secondary role is to process the natural environment.

Insect protein can be produced in orders of magnitude greater amounts than animal protein and can easily become important as needed.  We are just a long way from any need except as novelty.

There is a rational, even persuasive, argument for voluntarily eating insects: Bugs are high in protein, require less space to grow and offer a more environmentally friendly alternative to the vertebrates we Westerners prefer, advocates of the bug fare say.

However, this topic is not a hotbed of research, so while some data exist — in particular on the protein content of insects — there are some assumptions built into the latter part of this argument.

"The suggestion that insects would be more efficient has been around for quite some time," said Dennis Oonincx, an entomologist at in the . He and other researchers decided to test it, by comparing the greenhouse gas emissionsfrom five species of insects with those of cattle and pigs.

The results, Oonincx said, "really are quite hopeful."

For much of the world, eating insects — officially called entomophagy — is neither strange nor disgusting nor exotic. In southern , Mopani worms — the caterpillars of Emperor moths — are popular snacks. The Japanese have enjoyed aquatic insect larvae since ancient times, and chapulines, otherwise known as grasshoppers, are eaten in . But these traditions are noticeably absent in Europe and European-derived cultures, like the .

Insects' nutritional content, small size and fast reproduction rates have also made them appealing solutions to problems traditional agriculture can't solve. For instance, a task force affiliated with the Japanese space agency has looked to insects like silkworms and termites as a self-replenishing supply of fats and amino acids for astronauts on extended missions.

For children from 6 months to 3 years of age, low calories and low protein are the main causes of death, about 5 million a year, according to Frank Franklin, a professor and director of pediatric nutrition at the of at . Protein from insects could offer a less expensive solution if processed into a form similar to Plumpy'Nut, a peanut-based food for those suffering from malnutrition, he said.

embraced the arguments for entomophagy after learning about it roughly a year ago.

"The more I looked at it, the more it made incredible sense that this would be an important nutritional advance that is only going to bring back what has probably been there since the primitive man," he told LiveScience.

Oonincx and his colleagues used two important livestock animals, pigs and cattle, and compared existing data on their emissions of these greenhouse gases, plus ammonia, with data they collected from five species of insects: mealworms, house crickets, migratory locusts, sun beetles and Argentine cockroaches. The latter two species are not considered edible, at least not directly. Their taste is just not good, Oonincx said, however, protein extracted from them could be added to foods.

To quantify the animals' greenhouse gas footprints, the team measured the five insects' growth rates and their production of the greenhouse gases and ammonia — also a pollutant but not a greenhouse gas. They compared these to data already available on the cattle and pigs' growth rate and the rates at which they emitted the same pollutants.

The insects generally produced less methane, nitrous oxide and ammonia both per unit of body mass and per unit of mass gained than pigs or cattle.

"It proves the hypothesis that insects can be a more efficient source [of protein], and I definitely believe there is a future for edible insects," Oonincx said. "It may not be as the animal as such but regarding protein extraction there is a lot to be learned and a lot to be gained."

There are strategies that can reduce greenhouse gas emissions associated with raising livestock but these improvements can't bring about reductions necessary to meet emissions targets intended to curb global warming, write the authors of a paper published in the medical journal the Lancet in November 2009.

Their solution: a 30 percent reduction in livestock production, and therefore, a drop in meat consumption. This would mean diets with less saturated fat and fewer premature deaths caused by heart disease, they write. (The researchers note that not everyone needs to reduce meat consumption; agriculture produces enough fat, protein and other nutrients to feed all of us, but food isn't distributed equally, resulting in malnutrition and starvation in some places.)

A policy that reduces our hamburgers and barbeque is likely to encounter resistance, one of the authors, Alan Dangour, of the of Hygiene & Tropical Medicine, acknowledged. However, so will a push to switch to insects, he told LiveScience in an e-mail.

"It is clearly worthwhile investigating alternative sources of high-quality protein," Dangourwrote. "However, the practical barriers to eating insects (in Westernized societies) are extremely large and perhaps currently even likely to be insurmountable."
David Gracer, an American advocate for entomophagy who co-organized a conference on the subject in December, welcomed the findings.

"It is wonderful to see science showing the world that what is instinctively apparent is actually factually correct," Gracer said. "The point is that most scientists in Western nations are too busy ignoring this subject to go ahead and take it seriously, and as soon as people do so, the experiments simply reinforce what we already assumed was true."