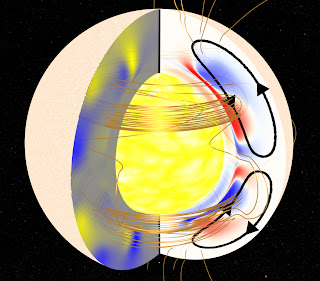 We have started to unravel the behavior of the solar conveyor belt whose fluctuations are clearly the driver behind the observed 11 year sunspot cycle.  It is described as akin to a conveyor belt that occasionally sticks a bit and then releases and hurries to catch back up.

The model also provides explication for the Maunder minimum.  The linkage to climate is still not entirely pinned down and we see it is a mechanism driven by strong changes in the magnetic flux that changes our upper atmosphere in a cyclic manner through the eleven years and could well affect temperatures.  It really one more significant factor that is challenging to fit in.

We now know what we are looking at and what we need to monitor closely in order to refine our working model.  It really looks good.  The sunspots are a small part of a huge system and we now understand how they fit in.

Researchers Crack the Mystery of the Missing Sunspots

March 2, 2011: In 2008-2009, sunspots almost completely disappeared for two years. Solar activity dropped to hundred-year lows;  Earth's upper atmosphere cooled and collapsed; the sun’s magnetic field weakened, allowing cosmic rays to penetrate the Solar System in record numbers. It was a big event, and solar physicists openly wondered, where have all the sunspots gone?

Now they know. An answer is being published in the March 3rd edition of Nature.

In this artistic cutaway view of the sun, the Great Conveyor Belt appears as a set of black loops connecting the stellar surface to the interior. Credit: Andrés Muñoz-Jaramillo of the Harvard CfA.

"Plasma currents deep inside the sun interfered with the formation of sunspots and prolonged solar minimum," says lead author Dibyendu Nandi of the Indian Institute of Science Education and Research in Kolkata. "Our conclusions are based on a new computer model of the sun's interior."


For years, solar physicists have recognized the importance of the sun's "Great Conveyor Belt." A vast system of plasma currents called ‘meridional flows’ (akin to ocean currents on Earth)  travel along the sun's surface, plunge inward around the poles, and pop up again near the sun's equator.  These looping currents play a key role in the 11-year solar cycle.  When sunspots begin to decay, surface currents sweep up their magnetic remains and pull them down inside the star; 300,000 km below the surface, the sun’s magnetic dynamo amplifies the decaying magnetic fields.  Re-animated sunspots become buoyant and bob up to the surface like a cork in water—voila!  A new solar cycle is born.

For the first time, Nandi’s team believes they have developed a computer model that gets the physics right for all three aspects of this process--the magnetic dynamo, the conveyor belt, and the buoyant evolution of sunspot magnetic fields.

"According to our model, the trouble with sunspots actually began in back in the late 1990s during the upswing of Solar Cycle 23," says co-author Andrés Muñoz-Jaramillo of the for Astrophysics. "At that time, the conveyor belt sped up."

The fast-moving belt rapidly dragged sunspot corpses down to sun's inner dynamo for amplification. At first glance, this might seem to boost sunspot production, but no. When the remains of old sunspots reached the dynamo, they rode the belt through the amplification zone too hastily for full re-animation.  Sunspot production was stunted.

Later, in the 2000s, according to the model, the Conveyor Belt slowed down again, allowing magnetic fields to spend more time in the amplification zone, but the damage was already done.  New sunspots were in short supply.  Adding insult to injury, the slow moving belt did little to assist re-animated sunspots on their journey back to the surface, delaying the onset of Solar Cycle 24.

"The stage was set for the deepest solar minimum in a century," says co-author Petrus Martens of the Montana State University Department of Physics.

Colleagues and supporters of the team are calling the new model a significant advance.
"Understanding and predicting solar minimum is something we’ve never been able to do before---and it turns out to be very important," says Lika Guhathakurta of NASA’s Heliophysics Division in . 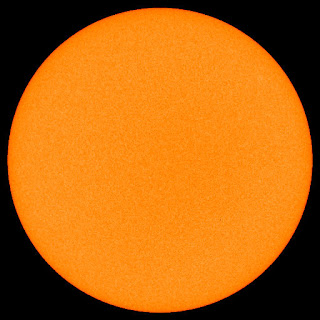 Three years ago on March 2, 2008, the face of the sun was featureless--no sunspots. Credit: SOHO/MDI

While Solar Max is relatively brief, lasting a few years punctuated by episodes of violent flaring, over and done in days, Solar Minimum can grind on for many years. The famous Maunder Minimum of the 17th century lasted 70 years and coincided with the deepest part of Europe's Little Ice Age. Researchers are still struggling to understand the connection.

One thing is clear: During long minima, strange things happen. In 2008-2009, the sun’s global magnetic field weakened and the solar wind subsided.  Cosmic rays normally held at bay by the sun’s windy magnetism surged into the inner solar system.  During the deepest solar minimum in a century, ironically, space became a more dangerous place to travel.  At the same time, the heating action of UV rays normally provided by sunspots was absent, so Earth’s upper atmosphere began to cool and collapse.  Space junk stopped decaying as rapidly as usual and started accumulating in Earth orbit.  And so on….

Nandi notes that their new computer model explained not only the absence of sunspots but also the sun’s weakened magnetic field in 08-09.  "It's confirmation that we’re on the right track."

Next step:  NASA’s Solar Dynamics Observatory (SDO) can measure the motions of the sun’s conveyor belt—not just on the surface but deep inside, too. The technique is called helioseismology; it reveals the sun’s interior in much the same way that an ultrasound works on a pregnant woman.  By plugging SDO’s high-quality data into the computer model, the researchers might be able to predict how future solar minima will unfold.  SDO is just getting started, however, so forecasts will have to wait.

Indeed, much work remains to be done, but, says Guhathakurta, "finally, we may be cracking the mystery of the spotless sun."

Credits:  This research was funded by NASA’s Living With a Star Program and the Department of Science and Technology of the Government of India.

The Sun has been in the news a lot lately because it's beginning to send out more flares and solar storms. Its recent turmoil is particularly newsworthy because the Sun was very quiet for an unusually long time. Astronomers had a tough time explaining the extended solar minimum. New computer simulations imply that the Sun's long quiet spell resulted from changing flows of hot plasma within it.

The Sun is made of a fourth state of matter - plasma, in which negative electrons and positive ions flow freely. Flowing plasma creates magnetic fields, which lie at the core of solar activity like flares, eruptions, and sunspots.

Astronomers have known for decades that the Sun's activity rises and falls in a cycle that lasts 11 years on average. At its most active, called solar maximum, dark sunspots dot the Sun's surface and frequent eruptions send billions of tons of hot plasma into space. If the plasma hits Earth, it can disrupt communications and electrical grids and short out satellites.

During solar minimum, the Sun calms down and both sunspots and eruptions are rare. The effects on Earth, while less dramatic, are still significant. For example, Earth's outer atmosphere shrinks closer to the surface, meaning there is less drag on orbiting space junk. Also, the solar wind that blows through the solar system (and its associated magnetic field) weakens, allowing more cosmic raysto reach us from interstellar space.

The most recent solar minimum had an unusually long number of spotless days: 780 days during 2008-2010. In a typical solar minimum, the Sun goes spot-free for about 300 days, making the last minimum the longest since 1913.

To study the problem, Munoz-Jaramillo used computer simulations to model the Sun's behavior over 210 activity cycles spanning some 2,000 years. He specifically looked at the role of the plasma rivers that circulate from the Sun's equator to higher latitudes. These currents flow much like Earth's ocean currents: rising at the equator, streaming toward the poles, then sinking and flowing back to the equator. At a typical speed of 40 miles per hour, it takes about 11 years to make one loop.

Munoz-Jaramillo and his colleagues discovered that the Sun's plasma rivers speed up and slow down like a malfunctioning conveyor belt. They find that a faster flow during the first half of the solar cycle, followed by a slower flow in the second half of the cycle, can lead to an extended solar minimum. The cause of the speed-up and slowdown likely involves a complicated feedback between the plasma flow and solar magnetic fields.

"It's like a production line - a slowdown puts 'distance' between the end of the last solar cycle and the start of the new one," says Munoz-Jaramillo.

The ultimate goal of studies like this is to predict upcoming solar maxima and minima - both their strength and timing. The team focused on simulating solar minima, and say that they can't forecast the next solar minimum (which is expected to occur in 2019) just yet.

"We can't predict how the flow of these plasma rivers will change," explains lead author Dibyendu Nandy (Indian Institute of Science Education and Research, Kolkata). "Instead, once we see how the flow is changing, we can predict the consequences."

Provided by for Astrophysics.