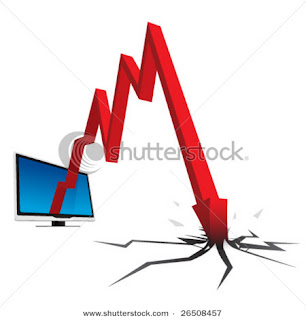 What this really means is that a mark up materializes in a given sector around clear leaders.  These rapidly reach their realistic target.  Yet this leaves a lot of stranded money that was not in with the leaders, yet the rationale has not been disproven.

This leads the rationale been applied to others in the sector to absorb the pool of willing money.  Once that pool is exhausted the situation is created whereby a fair number of issues are naturally over priced and internal variability has declined.  Thus we gain the mimicking effect.

Recall the old market adage that even a turkey can fly in a high wind.

This means that while the leaders have earned their prices a lot of turkeys are now been seriously over priced.  Crashes now become more probable and in the end inevitable as the turkeys have drawn of support.

The co-movement of stocks during six recent years shows the fraction of trading days during the year (f) in which a certain percentage of stocks (k/N) go up. The chart on the right combines all of the years. Image credit: Dion Harmon, et al.

(PhysOrg.com) -- Since early October 2008, when the Dow Jones Industrial Average began its drop that reached a low point the following March, many questions have been raised - particularly about what caused the crash and if it could have been predicted and somehow prevented. Some possible answers involve market volatility, changes in regulations, bank failures, easy credit, or any combination of external influences and internal market dynamics. In a new study, research analysts have found another clue to stock market crashes: high levels of collective stock movements - or market mimicry - tend to precede crashes, which suggests that measuring the mimicry level of the market could provide significant advance warning of an impending stock market crash.

The researchers, Professor Yaneer Bar-Yam and others from the New England Complex Systems Institute (NECSI) have posted their study, “Predicting economic market crises using measures of collective panic,” atarXiv.org. Their results indicate that it is the internal structure of the market, rather than external news, that is primarily responsible for crashes.

As previous research has shown, investors can often benefit from using a trend-following strategy - that is, buying or selling a stock based on the recent performance of other stocks (which is not necessarily based on any fundamental value). Mimicry is high when many stocks move up or down together, which provides a potential point of origin of self-induced market-wide panic.

Using data from the past several years, the researchers plotted the number of days in a year that a certain percentage of the market moves up. For the year 2000, the curve showed that about 50% of stocks were moving together on any given day. But as the decade went on, the curve became flatter and peaked lower, indicating an increase in co-movement. By 2008, the curve was nearly flat, with its distribution reaching the critical value of 1. During this time, the likelihood of any percentage of stocks moving up was almost the same. As the researchers explained, when mimicry gets this high, external influences become very weak compared to the influences among stocks as a whole.

In addition, the researchers found that the Dow Jones’ eight largest drops (percentage-wise) during the past 26 years occurred during periods in which mimicry reached a level that was twice the standard deviation from the previous year. This signature increase in mimicry occurred before the drops by less than a year, indicating that crashes are preceded by nervousness that causes investors to demonstrate increasingly collective behavior. For this reason, the simple signature pattern could provide advance warning of an impending crash.

“Our results suggest that self-induced panic is a critical component of both the current financial crisis and large single day drops over recent years,” the researchers wrote in their study. “The signature we found, the existence of a large probability of co-movement of stocks on any given day, is a measure of systemic risk and vulnerability to self-induced panic. Finally, we note that the ability to distinguish between self-induced panic and the result of external effects may be widely applicable to collective behaviors.”

In the future, the researchers plan to investigate whether volatility might be a better predictor of crashes than mimicry. They note that, while volatility often increases at the beginning of a crisis, it is generally considered to be unreliable for predicting crashes.

Researchers at the NECSI also played a role in changing the market regulations during the 2008 crash. The institute advised the Securities and Exchange commission to reinstate the uptick rule, which prohibits short selling during periods of price decreases; otherwise, short selling can further drive prices down. The uptick rule was reinstated on the morning of March 10, 2009, the day that the market began to rise.
More information: Dion Harmon, et al. “Predicting economic market crises using measures of collective panic." arXiv:1102.2620v1 [q-fin.ST]
Posted by arclein at 12:01 AM