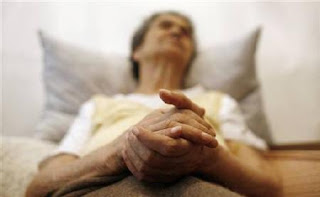 The disease needs to be detected as early as possible and here we have the tool that appears to make that possible.  There is evidence that certain therapeutic methods can at least stave of the onset of the disease itself, even unto the last terminal year of the disease.

This was observed in the case of a chess master who observed changes in performance, the year before his death.  It was discovered than through autopsy that he suffered from the very late stage of the disease and had avoided its expression for years.

So early is better and it is never too late to take up a new hobby like chess.

The second item brings us the same information.  Having a second language also postpones the mental effects of the disease by perhaps four years.

I do not know if this indicates a therapeutic action so much as an indication that intense learning efforts generate greater complexity allowing greater facility in working around failure modes.

If we are learning anything, it is that the brain is designed to work around physical damage which is pretty amazing.

This preliminary technology, which uses synthetic molecules to seek out and identify disease-specific antibodies, also could be used eventually in the development of specific biomarkers for a range of other hard-to-diagnose diseases and conditions, including Parkinson’s disease and immune system-related diseases like multiple sclerosis and lupus, the researchers predict.

“One of the great challenges in treating patients with Alzheimer’s disease is that once symptoms appear, it’s too late. You can’t un-ring the bell,” said Dr. Dwight German, professor of psychiatry and an author of the paper published in the Jan. 7 edition of Cell. “If we can find a way to detect the disease in its earliest stages – before cognitive impairment begins – we might be able to stop it in its tracks by developing new treatment strategies.”

Because patients with Alzheimer’s disease (AD) exhibit immune system activation and neurodegeneration in several brain regions, researchers in the study hypothesized that there may be numerous antibodies in the serum of affected patients that are specific to the disease and can serve as a biomarker.

Antigens – substances such as protein from a virus or bacteria that triggers an immune response – traditionally have been necessary for the discovery of antibody biomarkers. It has been impossible previously to identify an antibody (a type of targeted immune molecule) without first knowing the antigen that triggers its production.

The new study, however, challenges conventional wisdom and uses synthetic molecules (peptoids) rather than antigens to successfully detect signs of disease in patients’ blood samples. These peptoids have many advantages; they can be modified easily and can be produced quickly in relatively large amounts at lower cost.

The adaptive immune system is thought to be a rich source of protein biomarkers, but diagnostically useful antibodies remain undiscovered for a large number of diseases, Dr. German said. This is, in part, because the antigens that trigger an immune response in many diseases are unknown. The technology behind this discovery is essentially an immune-system reader, which is designed to pick out antibodies without knowing in advance which ones to look for.
The researchers used a combination library of several thousand peptoids to screen serum samples from mice with multiple sclerosis-like symptoms as well as from healthy control mice. The particular peptoids that retained more antibodies from the blood samples of the diseased animals were identified as potential agents for capturing diagnostically useful molecules.

The investigators then examined serum samples from six AD patients, six healthy patients and six patients with Parkinson’s. Three peptoids were identified that captured six times the IgG antibody levels in all of the Alzheimer’s patients when compared to the control group or to the Parkinson’s patients. Two of the peptoids were found to bind the same IgG antibody, while the third was shown to bind to different antibodies – meaning there are at least two candidate biomarkers for AD. Using an additional set of 16 normal control subjects and 10 subjects at the very early state of AD, the three candidate biomarkers identified AD with 90 percent accuracy.

“The results of this study, though preliminary, show great potential for becoming a landmark,” said Dr. German.

Funding was provided by the National Institutes of Health.

This news release is available on our World Wide Web home page at
http://www.utsouthwestern.edu/home/news/index.html

To automatically receive news releases from UT Southwestern via e-mail,
subscribe at  www.utsouthwestern.edu/receivenews

Scientists closing in on Alzheimer's tests

— Want to protect against the effects of Alzheimer's? Learn another language.

That's the takeaway from recent brain research, which shows that bilingual people's brains function better and for longer after developing the disease.

Psychologist Ellen Bialystok and her colleagues at in recently tested about 450 patients who had been diagnosed with Alzheimer's. Half of these patients were bilingual, and half spoke only one language.

"What we've been able to show is that in these patients… all of whom have been diagnosed with Alzheimer's and are all at the same level of impairment, the bilinguals on average are four to five years older — which means that they've been able to cope with the disease," said.

She presented her findings today (Feb. 18) here at the annual meeting of the American Association for the Advancement of Science. Some results of this research were published in the Nov. 9, 2010 issue of the journal Neurology.

CT brain scans of the Alzheimer's patients showed that, among patients who are functioning at the same level, those who are bilingual have more advanced brain deterioration than those who spoke just one language. But this difference wasn't apparent from the patients' behaviors, or their abilities to function. The bilingual people acted like monolingual patients whose disease was less advanced.

"Once the disease begins to compromise this region of the brain, bilinguals can continue to function," said. "Bilingualism is protecting older adults, even after Alzheimer's disease is beginning to affect cognitive function."

The researchers think this protection stems from brain differences between those speak one language and those who speak more than one. In particular, studies show bilingual people exercise a brain network called the executive control system more. The executive control system involves parts of the prefrontal cortex and other brain areas, and is the basis of our ability to think in complex ways, said.

"It's the most important part of your mind," she said. "It controls attention and everything we think of as uniquely human thought."

Bilingual people, the theory goes, constantly have to exercise this brain system to prevent their two languages from interfering with one another. Their brains must sort through multiple options for each word, switch back and forth between the two languages, and keep everything straight.

And all this work seems to confer a cognitive benefit — an ability to cope when the going gets tough and the brain is besieged with a disease such as Alzheimer's.

"It's not that being bilingual prevents the disease," told MyHealthNewsDaily. Instead, she explained, it allows those who develop Alzheimer's to deal with it better.

Moreover, other research suggests that these benefits of bilingualism apply not only to those who are raised from birth speaking a second language, but also to people who take up a foreign tongue later in life.

"The evidence that we have is not only with very early bilinguals," said psychologist Teresa Bajo of the  of  in , who was not involved in 's research. "Even late bilinguals use these very same processes so they may have also the very same advantages."
This article was provided by MyHealthNewsDaily, a sister site to LiveScience.
Posted by arclein at 12:01 AM