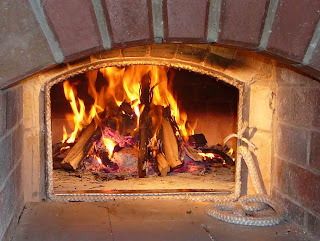 Wood burning smoke was always something that one needed to control one’s exposure to.  Yet the fumes are noxious enough to drive one away pretty quick, so it was a problem we learned to live with.  In times past, all dwellings were smoky and lung problems became the norm.

Again occasional usage bothers few and only briefly.  Mass usage would be a much different matter, but not likely to happen at all.

In any event I grew up with this stuff and much more nasty coal.  You soon learn that wind is your friend and stay clear of the gases.  Thus I have no problem organizing a string of biochar earthen kilns.  The wind is always present and it allows a person to work around these emitters.

*Note to journalists: Please credit the journal or the American Chemical Society as publisher of this report.*

Newswise — With millions of people warding off winter’s chill with blazing fireplaces and wood-burning stoves, scientists are raising red flags about the potential health effects of the smoke released from burning wood. Their study, published in the American Chemical Society’s (ACS’) journal, Chemical Research in Toxicology, found that the invisible particles inhaled into the lungs from wood smoke may have several adverse health effects. It is among 39 peer-reviewed scientific journals published by ACS, the world’s largest scientific society.

Steffen Loft, Ph.D., and colleagues cite the abundant scientific evidence linking inhalation of fine particles of air pollution — so-called “particulate matter” — from motor vehicle exhaust, coal-fired electric power plants, and certain other sources with heart disease, asthma, bronchitis and other health problems. However, relatively little information of that kind exists about the effects of wood smoke particulate matter (WSPM), even though millions of people around the world use wood for home heating and cooking and routinely inhale WSPM.

The scientists analyzed and compared particulate matter in air from the center of a village in where most residents used wood stoves to a neighboring rural area with few wood stoves, as well as to pure WSPM collected from a wood stove. Airborne particles in the village and pure WSPM tended to be of the most potentially hazardous size — small enough to be inhaled into the deepest parts of the lungs. WSPM contained higher levels of polycyclic aromatic hydrocarbons (PAHs), which include “probable” human carcinogens. When tested on cultures of human cells, WSPM also caused more damage to the genetic material, DNA; more inflammation; and had greater activity in turning on genes in ways linked to disease.

The American Chemical Society is a non-profit organization chartered by the Congress. With more than 163,000 members, ACS is the world’s largest scientific society and a global leader in providing access to chemistry-related research through its multiple databases, peer-reviewed journals and scientific conferences. Its main offices are in , , and .