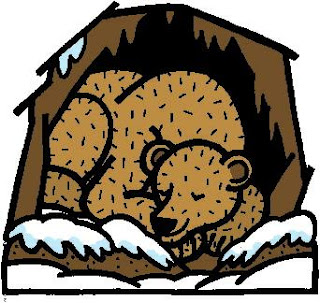 Bear hibernation appears unique and suitable for application to human needs.  It is obviously worthwhile to explore the biochemistry involved and to get all the answers to the questions implied.

Rather obviously this form of hibernation is also applicable to spending a lot of time in space as we are likely to face in the not too far distant future.  It is able to conserve all nutrients in the form of a closed loop, while also preserving muscle and bone mass.  In fact the method may be applicable to active space travelers let alone those sleeping.

It is all very suggestive and I no not understand why all this has not been picked up on a lot sooner.  Surely NASA has done work on this to work out the metabolic pathways.

An infrared camera captures an Alaskan black bear in deep hibernation. For the first time, researchers watched bears slumber all winter, discovering that the famous hibernators maintain a relatively high body temperature even as their breathing, heart rate, and metabolism drop far below normal.

In the woods of , five black bears snoozed all winter while researchers recorded every detail of their slow-motion daily drama for the first time.

Cameras caught them shuffling around every day or so.

Oxygen and carbon dioxide monitors kept tabs on their metabolism.

And sensors implanted in their abdomens recorded their heart rate and breathing.

It's more than reality show contestants usually have to put up with.

And yet, these scientific stars performed perfectly, offering an unprecedented glimpse into the secrets of hibernation.

It turns out that Ursus americanus hibernates in a manner unlike that of the dozens of other hibernating mammals. The biologists saw that the animals' heart rate dropped precipitously, they breathed just two or three times a minute and their metabolism slowed to a trickle as the animals slowly burned the fat they spent all summer accumulating.

None of that was unexpected.

And yet, unlike other hibernators such as squirrels, chipmunks, raccoons and skunks, the bears maintained a high body temperature throughout five months of inactivity.

Further, when the bears emerged in mid-April, the researchers got another surprise. Like a fuzzy-headed human waking from a Sunday snooze, the bears stayed groggy, with their metabolic rate remaining at about half that of summer levels for two to three weeks.

"The slow emergence from hibernation was very surprising," said Oivind Toien, a biologist at the of at the of at , who cross-country skied to a control hut near the dens every morning for five months.

Intrigued by the ability of black bears to snooze all winter - and with an eye toward one day putting injured or sick people into hibernation-like states - Toien and colleagues rounded up five bears that had wandered too close to people, lured them into ersatz dens in the woods, wired the animals and their hovels to the hilt, and then watched and waited.

Despite months of very little activity, other research has shown, black bears maintain muscle tone and bone mass, both of which deteriorate rapidly in humans confined to beds or astronauts floating in space.

How they do so remains a mystery that medical researchers want to unravel.

Barnes said his team euthanized the bears in the study to collect tissue samples. The researchers said the bears, chosen for the experiment because they appeared used to people, were also therefore too potentially dangerous to be released back in the wild.

"Somehow the bears have tricked their tissue, their bones and muscles, into thinking they're still doing work," said Brian Barnes, director of the Institute of Arctic Biology. "We're very interested in that."

Barnes said the study, unveiled Thursday at the annual meeting of the American Association for the Advancement of Science in Washington, marks the first time anyone has monitored black bears continuously throughout hibernation in a natural setting.

However, many other researchers have been probing the secrets of the animals' slumber.
"They are metabolic marvels," said Lynn Rogers, a biologist at the nonprofit Wildlife Research Institute in , has spent 44 years studying 's hibernating black bears.

His technique contrasts sharply with that of the researchers. Whereas the Alaskans wired their bears with high-tech monitors, Rogers peeks into dens and sometimes snuggles up to the beasts. "A wild bear will fall asleep next to me, and I can have my hand on its femoral artery or something to get a heart rate," said.

He once even laid his head on a hibernating bear's chest to hear its heart. "I know, stupid," he said, though he quickly added that he has never been attacked.

Rogers said skinny bears hibernate more soundly than fat ones, as they have less fat to draw on for energy.
One big hibernation mystery bear watchers are keen to understand: how the animals' bodies recycle key nutrients. "That's part of the wonder," said. "They go for months without urinating or defecating. Instead, they are recycling calcium and nitrogen, so they end up with strong bones and muscles."

Barnes said his team is now trying to understand the biological tricks the bears employ to lower their metabolism so dramatically.

Doing so could one day aid patients with strokes and serious injuries, he said.

"If we can uncover the way hibernators turn down their demand for oxygen, you can imagine developing a therapy . . . to put someone in stasis, a protected state," Barnes said. "That would give you more time. It would expand the 'golden hour' where it's critical to reach medical care to a golden day or a golden week."
Posted by arclein at 12:01 AM