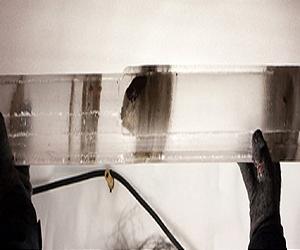 What I have objected to is the attempt to link the climate of the southern Antarctic zone to the rest of the world. It is not obviously plausible because of the prevailing circum polar wind system that isolates the Antarctic.  This work shows us that local conditions inside this circumpolar wind system dominate the ice core record.

It should have been apparent when the warming northern Hemisphere went its own way in a way that contradicted a global model linking the Antarctic.  Take away the Antarctic and we have lived through a warming cycle over the past three decades.

We need to accept the huge influence of the circumpolar wind system’s ability to seal off from the rest and know that this is a blessing that prevents excessive cold blizzards to ravage deep into the Southern Hemisphere and perhaps lower the global temperature a degree or two.

What I have properly understood is that the unique geometry of the land surface on Earth does two major things.

I have already observed that the key adjustment was made 12900 years ago.

Thus far many researchers have attempted to explain historical Earth climate data from on the basis of Milankovitch's classic hypothesis. "To date, it hasn't been possible to plausibly substantiate all aspects of this hypothesis, however," states Laepple. "Now the game is open again and we can try to gain a better understanding of the long-term physical mechanisms that influence the alternation of ice ages and warm periods."

Climate researchers at the Alfred Wegener Institute for Polar and Marine Research in the Helmholtz Association (AWI) expand a prevalent theory regarding the development of ice ages.

In the current issue of the journal Nature three physicists from AWI's working group "Dynamics of the Palaeoclimate" present new calculations on the connection between natural insolation and long-term changes in global climate activity. Up to now the presumption was that temperature fluctuations in Antarctica, which have been reconstructed for the last million years on the basis of ice cores, were triggered by the global effect of climate changes in the northern hemisphere.

The new study shows, however, that major portions of the temperature fluctuations can be explained equally well by local climate changes in the southern hemisphere.

The variations in the Earth's orbit and the inclination of the Earth have given decisive impetus to the climate changes over the last million years. Serbian mathematician Milutin Milankovitch calculated their influence on the seasonal distribution of insolation back at the beginning of the 20th century and they have been a subject of debate as an astronomic theory of the ice ages since that time.

Because land surfaces in particular react sensitively to changes in insolation, whereas the land masses on the Earth are unequally distributed, Milankovitch generally felt insolation changes in the northern hemisphere were of outstanding importance for climate change over long periods of time.

His considerations became the prevailing working hypothesis in current climate research as numerous climate reconstructions based on ice cores, marine sediments and other climate archives appear to support it.

AWI scientists Thomas Laepple, Gerrit Lohmann and Martin Werner have analysed again the temperature reconstructions based on ice cores in depth for the now published study. For the first time they took into account that the winter temperature has a greater influence than the summer temperature in the recorded signal in the Antarctic ice cores. If this effect is included in the model calculations, the temperature fluctuations reconstructed from ice cores can also be explained by local climate changes in the southern hemisphere.

Thomas Laepple, who is currently conducting research at Harvard University in the US through a scholarship from the Alexander von Humboldt Foundation, explains the significance of the new findings: "Our results are also interesting because they may lead us out of a scientific dead end." After all, the question of whether and how climate activity in the northern hemisphere is linked to that in the southern hemisphere is one of the most exciting scientific issues in connection with our understanding of climate change.

Thus far many researchers have attempted to explain historical Earth climate data from on the basis of Milankovitch's classic hypothesis. "To date, it hasn't been possible to plausibly substantiate all aspects of this hypothesis, however," states Laepple. "Now the game is open again and we can try to gain a better understanding of the long-term physical mechanisms that influence the alternation of ice ages and warm periods."
"Moreover, we were able to show that not only data from ice cores, but also data from marine sediments display similar shifts in certain seasons. That's why there are still plenty of issues to discuss regarding further interpretation of palaeoclimate data," adds Gerrit Lohmann. The AWI physicists emphasise that a combination of high-quality data and models can provide insights into climate change.

"Knowledge about times in the distant past helps us to understand the dynamics of the climate. Only in this way will we learn how the Earth's climate has changed and how sensitively it reacts to changes."

To avoid misunderstandings, a final point is very important for the AWI scientists. The new study does not call into question that the currently observed climate change has, for the most part, anthropogenic causes. Cyclic changes, as those examined in the Nature publication, take place in phases lasting tens of thousand or hundreds of thousands of years.

The drastic emission of anthropogenic climate gases within a few hundred years adds to the natural rise in greenhouse gases after the last ice age and is unique for the last million years. How the climate system, including the complex physical and biological feedbacks, will develop in the long run is the subject of current research at the Alfred Wegener Institute.
The original title of the publication to which this press release refers is: Laepple, T., M. Werner, and G. Lohmann, 2011: Synchronicity of Antarctic temperatures and local solar insolation on orbital time scales. It will be published in the magazine Nature on 3 March 2011 (doi:10.1038/nature09825).
Posted by arclein at 12:01 AM