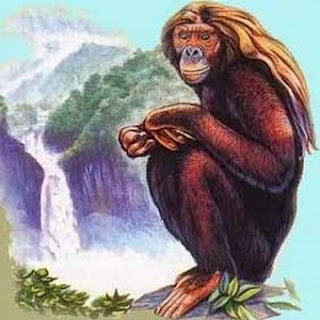 The one thing we have gained from the internet is a forum for organized data collection.  In the case of the Sasquatch or Bigfoot, we have BFRO and through their work we now know that the creature is living all through in the woodlands and operating nocturnally.

Thus immediately begs the question?  Where are its cousins throughout ?

The same niche exists and they should have similar population densities but still good enough to number in the thousands.

Here we have a class A example of a report taken during the second war.  ’s reporting system is no better that ours twenty years ago, so a lot of information is not organized as yet.  It is hard to make a case on a couple of random reports.

Similarly we had large orangutan like humanoids during the Vietnam War.

It is during war time that large numbers of soldiers are combing woodlands and it becomes possible to stumble upon such creatures, who normally have no difficulty in avoiding us.

I suspect that we will show that we have several species of early hominids tramping around our woodlands in in their thousands and all adept at avoiding us and living nocturnally for the most part,

A World War Two Monster Lair of the Beasts:
The Russian Bigfoot

When it comes to the controversy surrounding unidentified hairy man-beasts, many people assume – wrongly – that the only two such entities that fall into this particular category are the Bigfoot of North America, and the Yeti of the Himalayas. In reality, however, creatures very similar to both these beasts have been reported from countless parts of the world, including , , and . And this year marks the 70th anniversary of a truly fascinating account from yet another locale.

During the course of his life and research, the renowned seeker of unknown animals, Ivan T. Sanderson, amassed a great deal of data on the subject of strange animals seen in remote locales, including encounters with Bigfoot-style entities. One such story came from Lt. Col. V.S. Karapetyan, of the Soviet Army’s Medical Service, and describes an astonishing face-to-face encounter with one of the legendary man-apes during the Second World War.

Karapetyan began his story as follows: “From October to December of 1941 our infantry battalion was stationed some thirty kilometers from the town of (in the Dages­tan ) One day the representatives of the local authorities asked me to examine a man caught in the surrounding mountains and brought to the district center. My medical advice was needed to estab­lish whether or not this curious creature was a disguised spy. I entered a shed with two members of the local authorities.

“When I asked why I had to examine the man in a cold shed and not in a warm room, I was told that the prisoner could not be kept in a warm room. He had sweated in the house so profusely that they had to keep him in the shed.”

As Karapetyan entered the shed, he realized immediately that this was no normal man: “I can still see the creature as it stood before me, a male, naked and bare-footed. And it was doubtlessly a man, because its entire shape was human. The chest, back and shoulders, however, were covered with shaggy hair of a dark brown color. This fur of his was much like that of a bear, and two to three centimeters long.

“The fur was thinner and softer below the chest. His wrists were crude and sparsely covered with hair. The palms of his hands and the soles of his feet were free of hair. But the hair on his head reached to his shoulders, partly covering his forehead. The hair on his head, moreover, felt very rough to the hand. He had no beard or moustache, though his face was completely covered with a light growth of hair. The hair around his mouth was also short and sparse.”

Karapetyan continued his amazing story thus: “The man stood absolutely straight with his arms hanging and his height was above the average about 180 centimeters. He stood before me like a giant, his mighty chest thrust for­ward. His fingers were thick, strong, and exceptionally large. On the whole, he was considerably bigger than any of the local inhabitants. His eyes told me nothing. They were dull and empty - the eyes of an animal. And he seemed to me like an animal and nothing more.

“As I learned, he had accepted no food or drink since he was caught. He had asked for nothing and said nothing. When kept in a warm room he sweated profusely. While I was there, some water and then some bread were brought up to his mouth; and someone offered him a hand, but there was no reaction. I gave the verbal conclusion that this was no disguised person, but a wild man of some kind. Then I returned to my unit and never heard of him again.”

Was the strange beast a surviving relic of ancient man – perhaps something akin to a Neanderthal, even? Or was it a Russian equivalent or the Abominable Snowman of the ? Unfortunately, seventy years on, we’ll probably never know. The case, however, is a firm reminder that while we may think we know all that is afoot in our world the fact is that we really don’t.

Where there are wild places, there are very often wild beast-men, too.

Nick Redfern is the author of many books, including Final Events, The NASA Conspiracies, and Celebrity Secrets.