Japan One Week On 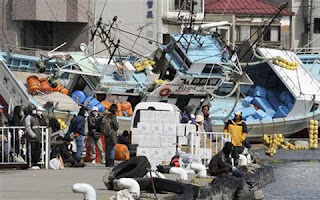 It has now been a week since the earthquake, tsunami and reactor accident and the picture appears to be filling in.

First of, the death toll is presently over 6,000 and somewhere around 10,000 are missing.   This is much better than the fifty thousand that it looked like three days ago. A realistic estimate today appears to be a minimum of 15,000 and perhaps as much as 25,000, providing a lot of the missing have not been reported as yet.  This is ten percent of the losses experienced during the boxing day tsunami of 2004 in and displays the stark difference between preparedness and lack thereof.

Even more impressive is the sheer lack of collapsed buildings from what was a violent earthquake.  This is a great engineering achievement.  There are always ways to improve, but it appears that a lot of things were done right.  When ninety to ninety five percent of potential victims merely got scared, we are doing pretty well.

As happened in Katrina, it is necessary to move a huge block of the population away from the affected region.  Much of this can be done by supporting voluntary decisions to relocate.  Some of this has already started and it will need to be accelerated.  This both restores production and clears the way for the general cleanup.  Perhaps we will see clearly inundated land simply abandoned.   This was a pretty good stress test of a once in a millennia event.  Simply not building what was destroyed will spare the population from it ever been as serious again and millennia of nightmares for those living on such land.

They are still struggling to master the reactor disaster.  Power has been restored and if they can restore the integrity of the pumping system, then the risk of a worse accident will recede as the reactors cool.  Actual decommissioning will be a serious challenge and I am not impressed by comments about using cement to bury parts of it all.

Otherwise, a death toll of say around 20,000, minor radiation exposure, a slew of plant workers sacrificed perhaps and perhaps 500,000 dislocated for various lengths of time.  There will be a massive rebuilding and restoration job that will absorb ’s resources for perhaps the next five years, but the economy should be recovering very quickly.

The real truth is that got of light and we now have a real example of the worst case scenario that engineers need to build for in at risk zones.  Also Nuclear plants must be built were they are at least in the shadow of a barrier island.  A local hundred foot tsunami is possible anywhere one has open access to the sea, however unlikely.  A barrier island completely eliminates such risk and may even be in position to dampen the effects of quakes as is .

One Week After Earthquake,Tsunami Ponders Future

Local residents wait for a ship to travel to a nearby island from the devastated city of , northeastern , just one week after a massive earthquake and resulting tsunami, March 18, 2011

It's been a week since a massive earthquake and tsunami devastated a large part of eastern killing at least 6,548 people. While much of the attention remains focused on the crippled number one nuclear plant, 's government has also begun looking at what comes next.


At 2:46 p.m. March 18, the disaster-hit north of paused. Survivors bowed their heads and rescue work stopped for just one minute.


marked the one-week anniversary of the combined earthquake and tsunami disaster with a grim statistic: the death toll passed that of 1995's earthquake in and it's likely to keep rising with more than 9,000 unaccounted for.

Friday Yoshihiro Murai, the governor of hard-hit Miyagi prefecture, suggested they might move to other parts of .

Murai says there are 220,000 people homeless in his prefecture, and the local government will not be able to provide temporary housing for them any time soon. He says he will ask survivors to consider moving so they can enjoy better living conditions.


Aid continues to roll into the area, but damage to infrastructure is making distribution difficult. Life remains tough for the displaced, with complaints about shortages of food, water and gasoline.


But, day by day, more roads are being reopened allowing trucks of relief goods to reach most victims. However, some communities remain cut off.

On Friday evening, Japanese Prime Minister Naoto spoke of the hardships in an address to the nation.


Kan said he understands people in shelters are cold and don't have enough food, but the government is doing all it can. He said he hopes to return a sense of security to them soon.
Posted by arclein at 12:01 AM