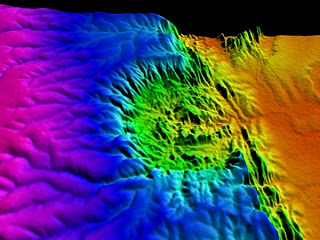 A previously recognized crater in the has been confirmed as an impact crater.  It struck during the past few hundred millions of years or so and will be amenable to proper age measurement.  It is about ten miles across which puts it up there in size.  It surely caused a local extinction event and plenty of temperature problems until the ash came out of the atmosphere.

A clay marker horizon should exist as with the K-T marker.

Recall that clay starts out as an ash that then weathers into clay.

It is too soon to remark on the importance of this event until we determine its precise age and the extent of its ash halo.  It certainly caused plenty of damage but in the order perhaps of a super volcano, but far less than the disaster.

A computer model of the Luizi crater based on satellite data.
Diagram courtesy Ludovic Ferriere and SRTM/NASA

NatGeo - A circular depression deep in the Democratic Republic of the Congo (DRC) has been confirmed as the first known impact crater in central Africa, a new study says. The find brings the number of known meteor craters on Earth to 182.


The so-called Luizi structure was first described in a German geological report from 1919. But without further fieldwork, it was impossible to say for sure that the 10.5-mile-wide (17-kilometer-wide) feature had been made by a meteor impact.


On other planets, such as Mercury and Mars, it's easier to identify impact craters based only on their shapes, since these worlds no longer have geologic forces making major changes to their surfaces.


But on Earth, many older craters have likely been erased by tectonic activity or erosion, while others are so covered with dense vegetation or sediments, like Luizi, that they're almost impossible to spot without satellites.


What's more, the crater-like structures we do see may have been made by volcanoes, collapsed underground chambers, and other forces that have nothing to do with impacts, said study leader Ludovic Ferrière, curator of the rock collection at the of in .


"On Earth, to confirm it's an impact, you have to go in the field because you need evidence of high pressures and temperatures," Ferrière said.


The researcher first became interested in the Luizi structure after seeing satellite pictures published in the 1990s.


By studying the available satellite data, Ferrière and colleagues estimated that the structure has an elevated rim about 1,148 feet (350 meters) high, as well as an interior ring and a central depression.


But to truly confirm Luizi as an impact crater, the researchers had to mount an expedition to the politically tumultuous DRC. (Related: "Rare Gorillas at Risk as Rebels Seize .")


"I was working for a year just to find a contact there, because you need a local person to help you find your way around," Ferrière said.


"I flew direct to , the second largest city in the DRC. From there we had to drive from the city to the crater," he said.


"I had looked at maps and planned a route before I left. But when I got there, my contact told me there is no bridge across part of my intended path. We had to take some crazy gravel roads with big potholes inside. These are not good roads to drive on, even with a four-wheel-drive car."

The team set up camp in a small village about 8 miles (13 kilometers) from the crater rim, recruiting two local guides/porters and a soldier to help them safely navigate the wild terrain.


"The crater is in a national park, and I thought it would be like the jungles of ," Ferrière said. "Instead it was a tree savanna—a big plataeu with dry grass. The grass was sometimes more than a meter [3.2 feet] high."


Standing on the rim of the Luizi structure, Ferrière could see skinny trees that seemed to fill the depression, with the crater's distant edge rising like small hills.


Despite the remote, wooded terrain, "we saw no large animals, only snakes. But we did see a lot of remnants of poachers. Sometimes we'd come to a site and the doused fires were still hot."


Ferrière's team spent about a week at the crater collectingsamples, which were sent back to the lab in  for analysis.


"I found so-called shatter cones, which are features in the rock only found in impact structures," he said. The nested, conical shapes in such features are evidence that the bedrock has been exposed to extreme pressure from a shock wave.


The crater rocks also contained an abundance of shocked quartz, a version of the mineral known to form only from impacts or nuclear blasts, Ferrière said.


"Everybody will believe me now, I think, that this is an impact site."


The scientists think the Luizi crater was made by a meteor more than 0.6 mile (a kilometer) wide that slammed into what is now the DRC at about 45,000 miles (72,000 kilometers) an hour.


For now it's unclear how old the crater is—the scientists can say only that the affected rocks are about 575 million years old, "but we know it's younger than that, because the rocks have been excavated," Ferrière said.


"It would be nice to do more fieldwork, because the shape of the structure with this inner ring can tell us about the exact formation process involved," he added. In the meantime, the researcher will continue to study the rock samples, now housed at the museum.

"There is still a lot to discover" about Luizi, he said.