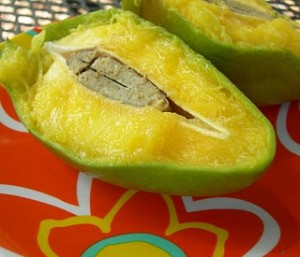 If the biochemistry of weight loss and gain were properly understood, then a solution would have long since been indicated.  Everyone knows different.

The take home is that an extract of African bush mango or Irvingia gabonensis called IGOB131is clearly associated with rapid weight reduction and plausibly with a resetting of the metabolic pathways to sustain that weight loss.  We are indicating two to three pounds each week been lost in the early field trials.

More convincing is the absolute lack of obesity in the subject native populations using this product.

Of course the commercial marketers are jumping on this and are providing a usable product.

The extensive native usage is a pretty good field test and suggests that it is safe to use.  It is way to early to deliver definitive science here but again use at ones own risk.

My point is that there is many failed weight loss protocols out there and most of the successful ones are excessively demanding for easy sustainability.  My on and off fasting protocol is the easiest that I am aware of and it is highly effective.  Yet the actual monthly loss is a sedate two and a half pounds per month.  The body actually adjusts very slowly.

This small addition to one’s diet generates a weight loss that is around four times faster suggesting that the literature is correct to suggest major changes in the metabolism.

This is extraordinary good news particularly for those suffering from outright obesity.

5 Ramazanov, Z. “Effect of fucoxanthin on energy expenditure in obese women: a double-blind, randomized and placebo-controlled trial.” Submitted for publication 2008.

* These statements have not been evaluated by the Food and Drug Administration. This product is not intended to diagnose, treat, cure, or prevent any disease.
Alan Sears, M.D., is a practicing physician with extensive experience in the fields of complementary and natural healthcare. The recommendation and materials on this site represent his opinion based on his years of practicing medicine. The information and material provided on this site are for educational purposes only and any recommendations are not intended to replace the advice of your physician. You are encouraged to seek advice from a competent medical professional regarding the applicability of any recommendations with regard to your symptoms or condition. It is important that you do not reduce, change or discontinue any medication or treatment without consulting your physician first. The personal stories shared on this website are personal to the users and will not be typical of the results you will have if you follow the advice provided on this website.

I’ve been getting a lot of questions about African Mango, also called Irvingia gabonensis and whether this fruit can help people lose weight. African mango is similar to the mango’s you’ve probably eaten at some point. So, to help you, I wanted to review it and give people a better idea of what it is, what the research says and whether it might help weight loss. On the web, you may also see African Mango called Bush Mango or Wild Mango. All names refer to its scientific name, Irvingia gabonensis. The extract of African mango that has been used in weight loss research is called IGOB131.

This name is sometimes shortened to simply OB131. Keep this in mind as you read this review.

In one 4 long week study, published in 2005 in the Journal Lipids in Health and Disease, 40 overweight people were given either 3.15 grams of Irvingia gabonensis or a comparable amount of oat bran  30 minutes before meals, in conjunction with a low fat diet. People ate about 1800 calories a day.  At the end of this 4 week study, those receiving Irvingia gabonensis lost about 5.6% of body weight vs. those in the placebo group who  lost about 1% of body weight. Body fat did not change significantly in either group.

Body fat was measured using bioelectric impedance analysis, a method commonly used in health clubs. This method, while quick and easy to administer, is less accurate than other means like hydrostatic weighing,  Bod Pod etc.

In a 10 week study, published in 2009 in the journal, Lipids in Health and Disease, 102 healthy overweight men and women were followed for 10 weeks. People were split into either a placebo group or a group that received 350 mg of Irvingia gabonensis. The Irvingia gabonensis was supplied by Gateway Health Alliances Inc().

In those receiving the Irvingia gabonensis extract, body weight, body fat and waist circumference had decreased more than in the placebo group. Those getting IGOB131 lost 28 pounds vs. about 1 pound for those getting the placebo. Body fat was determined using bioelectric impedance analysis.

The weight loss observed in the African Mango group could account for the the decreases in cholesterol, blood glucose and C reactive protein. These things do change when people lose weight. The soluble fiber in the extract may also had an effect on cholesterol levels.

Another study published in 2009 in Lipids in Health and Disease by the same researchers exposed mouse cells to IGOB131 and noted that the compound increased fat cell production of adiponectin. Research finds that adiponectin has anti inflammatory properties and that high levels of adiponectin appear to be correlated with a lower a lower risk of heart disease. This same study noted that IGOB131 inhibited fat cell development as well.

The 10 week long study published in 2009 also noted that the IGOB131 extract reduced levels of leptin. Leptin is a hormone made inside fat cells which plays a role in appetite. Basically this is what happens:

When leptin levels fall, we get hungry

That’s the easy answer. The amount of leptin we have is dependent on how much body fat we have. So, the more body fat, the higher the leptin levels. One problem however is that many overweight people (who make a lot of leptin) are insensitive to the leptin and it doesn’t work to stop them from eating. In other words they areleptin resistant.

Because Irvingia gabonensis lowered leptin levels, some take this to mean that it helps weight loss. But, remember that as leptin levels decrease, we get hungry. I’m saying this because the decrease in leptin that was observed in the 10 week long 2009 study appear to be a result of IGOB131 reducing fat cell growth and differentiation. In other words, as fat cell growth slows, leptin levels might fall also.

If the African mango extract does reduce leptin levels, would a continued drop in leptin cause a rebound hunger in people, causing them to eat more? I don’t know? The longest study so far has only lasted 10 weeks. The bottom line to all this talk about leptin is that leptin is not the only player in the game when it comes to obesity. If Irvingia gabonensis has any real effect on combating weight loss, its effects on leptin are probably not the answer.

Things to think about

It is important for people to remember that all of the positive research on African mango (Irvingia gabonensis) has used a specific extract called IGOB131. Consumers should look for the amount of IGOB131 on supplement labels. Supplements containing whole African mango or other extracts of African mango may not have the same effects.

Even though the research to date should be considered preliminary, so far there are 2 human trials and both of the studies indicate that some weight loss effect is occurring.

According to the research so far, best results appear to have occurred when people take between 350 mg to 3 grams of irvingia gabonensis per day.  This is a large range so people may want to start with 150-350 mg first and see how they feel before they increase the dosage if needed. Obtaining good results is probably better if African mango is combined with a low fat / low calorie diet.

Don’t be swayed by the amount of Irvingia gabonensis a supplement contains. Look instead for how much of theIGOB131 extract the product has. This is what the research uses.

No study to date has investigated if exercise speeds weight loss with African mango. In theory it should. Regardless, research does show that exercise, in conjunction with dieting, increases the percentages of weight  that’s lost as fat. Remember we don’t just want weight loss. We want fat loss. Dieting alone can lead to significant muscle loss, which lowers metabolism, making it harder to lose weight.

At least one of the studies has been sponsored by a supplement company. Some may look as this as a conflict of interest. However since pharmaceutical companies perform much of their own research, I appreciate it when a supplement company takes the time to publish research on their products. As long as the research studies are well designed and the company has not influenced the outcomes, I have no problem with this.

Weight loss could account for the observed changes in total cholesterol and LDL and CRP. Some have attributed the effects of African Mango to its soluble fiber content but I think this may be premature. In other words, I’d like to see more studies done.

Only one study has noted that Irvingia gabonensis lowered leptin levels. Most weight management researchers view leptin as one of many factors influencing weight loss. Leptin alone, is not the answer.