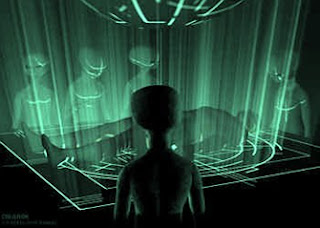 This article mirrors the problem that the abduction phenomena presented me in my attempts to come to grips with it.  Firstly there is a phenomenon.  So far so good.  However, it fails consistently in providing irrefutable externals.  What I mean by that, is there are no tracks in the sands or perhaps more specifically, we receive no data that could not have been conjured up out of the observer’s subconscious.

The UFO phenomenon is all about externals.  There are multiple witnesses and physical evidence however scant.

The abduction event that is linked directly to a UFO event is often quite creditable and needs consideration.  In fact we have got some of our best information from such situations and I have posted a couple.

Betty and Barney had the external in seeing a craft whose memory could be recovered.  That was pretty decent.

The problem is that hypnotic recovery is unreliable and can be overlain by the subconscious.

Fortunately, certain observers have not needed this at all and that includes Travis Walton who had superb externals to back him up that have never been successfully debunked.

What we know is that legitimate experiences include interaction with a UFO and that anything less is plausibly auto induced through the subconscious and has no externals.

In both cases the information provided to us is scant.  Observing we need to do a better job at husbandry of the Earth is a self evident truth that we all can comprehend.  Telling us how to structure our society to achieve that laudable end would accomplish something.

To the extent that we have creditable data, it appears that UFOs continue to collect samples and do nothing positive for the person sampled that we can determine.

Abductions: What do we Really Know?

September 19 of this year will mark the 50th anniversary of the famous Betty and Barney Hill UFO encounter – an event that, arguably, ushered in the phenomenon that has become known as “Alien Abduction.” But, almost half a century after the Hill’s firmly added a new category to UFO research, what do we truly know about the real nature of abductions? Let’s take a look.

On the night at issue, Betty and Barney, a couple, were driving home from vacationing in when they were subjected to a terrifying experience. Despite viewing some form of unusual aerial object in the night-sky, and what appeared to be living entities that could be seen through the craft’s portals, until their arrival back home, the Hill’s had little indication that there was far more to the encounter than they realized.

It later transpired, however, that approximately two-hours of time could not be accounted for. After months of emotional distress, sleepless nights, and strange dreams pertaining to encounters with unusual, otherworldly beings, the couple finally sought assistance from Benjamin Simon, a Boston-based psychiatrist and neurologist. Subjected to time-regression hypnosis, both Betty and Barney recalled what had taken place during that missing 120-minutes or so.

Significantly, they provided very close accounts of encounters with apparent alien creatures that took the pair on-board some form of alien vehicle and subjected them to a series of physical examinations – a number of which were highly distressing in nature. The experience of the Hill’s later became the subject of John Fuller’s now-classic book, The Interrupted Journey and a 1975 movie of the same name.  And although claims have been made (and almost certainly highly-justified claims, too) that the phenomenon long pre-dates the Hill affair, it was certainly this incident that paved the way for the massive interest in abductions that ultimately developed in the 1980s and 1990s.

While abduction cases continued to surface now and again in the 1960s, and more so in the 1970s, it was without doubt the 1981 publication of Budd Hopkins’ book Missing Time that really thrust the phenomenon into the public-arena, big-time. Then, with the 1987 appearance of ’ Intruders, the phenomenon gained further publicity.

By now, there was a growing, widespread belief within the ufological research arena that extraterrestrials from some far-away world were engaged in a secret program to kidnap, experiment on, and exploit the Human Race – possibly for reasons relative to genetic manipulation, and the creation of hybrid entities of a definitively half-human/half-alien nature. And, even though this particular theory continues to be championed beyond all others when it comes to abductions, it is far from being alone.

Whitley Strieber’s 1987 best-seller, Communion – while certainly not dismissing the extraterrestrial hypothesis for abductions – demonstrated that even if aliens were at the heart of the abduction puzzle, there was far more to them than mere extraterrestrial scientists engaged in some other-world research project. Communion, as well as Strieber’s subsequent titles, delved into potential connections between the Grays of UFO lore and the realm of the dead, the similarities (as had been noted by acclaimed ufologist Jacques Vallee in such titles as Messengers of Deception) between modern-day abductions and encounters in centuries-past with magical, ethereal entities like fairies, and much more of a thought-provoking nature.

And, as time has progressed, so have the theories behind what may be present at the heart of abductions. Before his untimely death in 2009, Mac Tonnies was busily chasing down the Cryptoterrestrials. In Mac’s mind, our mysterious abductors might not be from the stars, after all. Rather, he opined, they might very well be a very ancient terrestrial race – albeit one that exists alongside us in deep stealth.

Mac told me: “I regard the alleged ‘hybridization program’ with skepticism. How sure are we that these interlopers are extraterrestrial? It seems more sensible to assume that the so-called aliens are human, at least in some respects. Indeed, descriptions of intercourse with aliens fly in the face of exobiological thought. If the cryptoterrestrial population is genetically impoverished, as I assume it is, then it might rely on a harvest of human genes to augment its dwindling gene-pool. It would be most advantageous to have us believe we’re dealing with omnipotent extraterrestrials rather than a fallible sister species.”

Then there was the research of the late Dr. John Mack, who cited in his published works the intriguing and disturbing testimony of a number of abductees who believed the predatory, black-eyed beings that are so associated with abductions were actually trying to steal their souls, rather than their DNA.

As for me, while undertaking the research for my Final Events book, I spoke with a variety of government-insiders who firmly believe the “aliens” are literal demons, and that the entire abduction experience is an illusion, a sophisticated hologram, designed to convince us we are dealing with extraterrestrials, thus allowing the minions of Satan to get their claws into us.

And what about the story of Jim Penniston? Formerly of the Air Force, and one of the key military players in the famous UFO encounter at ,  in December 1980, Penniston – in 1994 – underwent hypnotic regression, as part of an attempt to try and recall deeply buried data relative to what occurred during one of ’s closest encounters. Very interestingly, while under hypnosis, Penniston stated that our presumed aliens are, in reality, visitors from a far-flung future.

That future, Penniston added, is very dark, in infinitely deep trouble, polluted and where the Human Race is overwhelmingly blighted by reproductive problems. The answer to those same, massive problems: they travel into the distant past – to our present day – to secure sperm, eggs and chromosomes, all as part of an effort to try and ensure the continuation of the severely waning Human Race.

So, where am I going with all this? Well, clearly all the above-scenarios to which I have referred cannot be correct. Maybe one of them is on target. Maybe none of them are. The fact is, however, practically half-a-century after Betty and Barney Hill opened the floodgates, while we know there is an undoubted phenomenon at work, it is a phenomenon that – despite what some researchers might tell you - is still steeped in deep mystery, with respect to its real nature.

In other words, in answer to the title of this post what we really know is…not much at all. I sincerely hope that the next 50 years of abduction research will bring us some definitive answers, rather than just more and more reports. But I’m not holding my breath.

Hello,
I visited your blog. The information which you have shared in your site is very informative. I really much impressed with your blog.
I have added your blog to Blog Roll at http://boutiquerings.wordpress.com/. So would you give my links on your blog it will be useful to our visitors and also can get ideas and information from your site.

Thanking You
With Regards,
Alexis