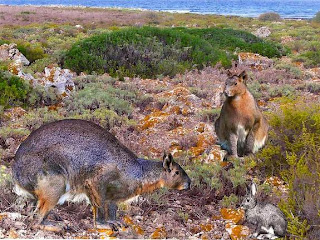 It has long been possible to breed out huge rabbits and it was quite likely that on some island we would run across a giant bunny.  That is now accomplished with the discovery of these fossils.

Obviously they failed to survive contact with man, but it would have been surprising if they had.

Anyway, it is Easter and this is an appropriate tale for the time

A reconstruction of Nuralagus rex in a landscape with a living European rabbit Oryctolagus cuniculus in the foreground for comparison.

Just in time for Easter, the skeleton of a giant rabbit has been discovered, one that was once about six times the size of today's bunnies.

The fossils of the giant were discovered on the of off the coast of , a fact reflected in the rabbit's scientific name, Nuralagus rex, "the Minorcan king of the rabbits." [Illustration of giant rabbit]

"I needed four years to recover a good sample of N. rex bones because they were in very hard red stone," paleontologist Josep Quintana at the Catalan Institute of Paleontology in Barcelona, Spain, told LiveScience. "To pull the bones out from the matrix, it was necessary to use some hundreds of liters of acetic acid, a very concentrated vinegar — very hard and patient work! But it was worthwhile, of course."

When the bunny lived approximately 3 million to 5 million years ago, it weighed about 26 pounds (12 kilograms), about six times the size of the living European rabbit (Oryctolagus cuniculus). [Fossils of Oldest Rabbit Relative Found] 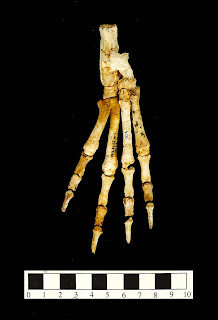 Foot bones of Nuralagus rex, the giant rabbit whose remains were discovered on the .
"For most of their over 40-million-year history, members of the rabbit family have fit well within the size range exhibited by relatively well-known modern members of the family. Now, discoveries on Minorca have added a giant to the mix, a 25-pound, short-legged rabbit," said rabbit researcher Mary Dawson at the Carnegie Museum of Natural History in Pittsburgh, who did not take part in this study.

As big as it was, N. rex might have been easy prey today — it lost the ability to hop. The long, springy spine of a typicalmodern rabbit was lost in N. rex, replaced by a short, stiff spine that would make leaping difficult.

"I think thatN. rex would be a rather clumsy rabbit walking — imagine a beaver out of water," Quintana said.

The giant probably also had poor hearing and vision, with relatively small eye sockets and internal ear parts. Its senses likely deteriorated for the same reason it got so large — it did not have predators to worry about. As such, it probably lacked another key trait often associated with rabbits — long ears. The bunny likely sported relatively small ears for its size.

Based on the rabbit's curved claws, the researchers suspect the animal was most probably a digger that lived on roots and tubers it unearthed. Its neighbors included bats, large dormice and giant tortoises.

Quintana proposes that this newfound giant might make a good mascot for the island. "I would like to use N. rex to lure students and visitors to ," he said.

The scientists detailed their findings online today (March 21) in the Journal of Vertebrate Paleontology.
Posted by arclein at 12:01 AM