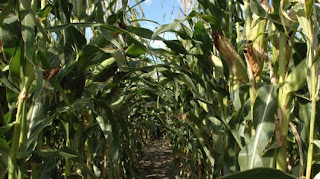 What has been engineered is a cellulose processing bacteria able to produce isobutenol in one step.  This is good news and perhaps opens the door to a prospective farm based protocol in which cellulose is ground up and digested to specifically produce fuel grade isobutanol.

We certainly wish to avoid hauling plant waste anywhere.  A waste to fuel system is badly needed for agriculture, no matter what else develops.  Farm energy is best served with burnable biofuels for the foreseeable future if we can solve the conversion challenge.

Two problems are solved.  The waste is easily consumed and process fuel is made available right where it is needed.  This fuel has the added advantage of overcoming the disadvantages of ethanol.

With the situation in causing a spike in fuel prices worldwide there's some good biofuel-related news out of the Department of Energy's (BESC) that could help to reduce many countries' dependence on oil imports. For the first time, BESC researchers have succeeded in producing isobutanol directly from cellulosic plant matter using bacteria. Being a higher grade of alcohol than ethanol, isobutanol holds particular promise as a gasoline replacement as it can be burned in regular car engines with a heat value similar to gasoline.

Due in large part to its natural defenses to being chemically dismantled, cellulosic biomass like corn stover and switchgrass, which is abundant and cheap, has been much more difficult to utilize than corn or sugar cane. This means that producing biofuel from such biomass involves several steps, which is more costly than a process that combines biomass utilization and the fermentation of sugars to biofuel into a single process.

Building on earlier work at UCLA in creating a synthetic pathway for isobutanol production, the BESC researchers managed to achieve such a single-step process by developing a strain of Clostridium cellulolyticum, a native cellulose-degrading microbe that could synthesize isobutanol directly from cellulose.

"In nature, no microorganisms have been identified that possess all of the characteristics necessary for the ideal consolidated bioprocessing strain, so we knew we had to genetically engineer a strain for this purpose," said Yongchao Li of Oak Ridge National Laboratory.

The research team chose Clostridium cellulolyticum, which was originally isolated from decayed grass, because it has been genetically engineered to improve ethanol production, which has led to additional more detailed research. While some Clostridium species produce butanol and others digest cellulose, none produce isobutanol, an isomer of butanol.

"Unlike ethanol, isobutanol can be blended at any ratio with gasoline and should eliminate the need for dedicated infrastructure in tanks or vehicles," said James Liao, chancellor's professor and vice chair of Chemical and Biomolecular Engineering at the UCLA Henry Samueli School of Engineering and Applied Science and leader of the research team. "Plus, it may be possible to use isobutanol directly in current engines without modification."

Earlier this week, U.S. Energy Secretary Steven Chu visited the BESC to congratulate the research team, saying, "Today's announcement is yet another sign of the rapid progress we are making in developing the next generation of biofuels that can help reduce our oil dependence. This is a perfect example of the promising opportunity we have to create a major new industry – one based on bio-material such as wheat and rice straw, corn stover, lumber wastes, and plants specifically developed for bio-fuel production that require far less fertilizer and other energy inputs."

The team's work is published online in Applied and Environmental Microbiology.