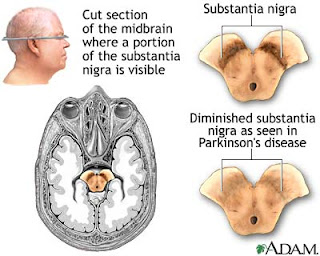 Along with MS and Alzheimer’s this is the disease that desperately needs real progress.

A million people suffer from the disease and it is a long and lingering way to die.  A victim retains his wits but slowly loses control over all motor functions.  First diagnosis until death now appears to be around fifteen years if what has happened to two friends of mine is an indication.  I suspect modern methods extended their lives perhaps twofold.

Now we have a promising pathway that can be used to possibly intercept the progress of the disease itself.  It may not cure it but blocking the damage is good enough.  It appears complex and tricky and we still lack any understanding of causation except to suspect an environmental insult when young.

Unfortunately that is not good enough to narrow it down.

Newswise — AMES, Iowa - A protein pathway that may hold the secret to understanding Parkinson's disease has been discovered and explained by Iowa State University researchers.

Anumantha Kanthasamy, a distinguished professor of biomedical sciences and the W. Eugene and Linda R. Lloyd Endowed Chair in Neurotoxicology at the ISU College of Veterinary Medicine, has been working to understand the complex mechanisms of the disease for more than a decade. He believes this recent discovery offers hope for the cure.

The research was funded by the National Institutes of Health and is published in the Journal of Neuroscience.

Now, Kanthasamy has shown how to modify the production of the kinase-C, and, more important, how to inhibit it.

The process begins with a protein called alpha-synuclein (ά-synuclein) that - after interacting with other proteins in cells - becomes part of the protein complex that modifies kinase-C level in the cells.

One of the proteins that alpha-synuclein interacts with inside the cell is known as p300.
By changing the activity of p300 protein, Kanthasamy believes that production of the destructive kinase-C will be inhibited.

"We have identified an essential pathway that regulates the survival of dopamine-producing nerve cells," he said.

"This p300 is an intermediate protein that is implicit in the Parkinson's disease," he said. "By modifying this protein, we can potentially reduce the expression of kinase-C and the associated destructive effects on dopamine-producing cells."

"We found the mechanism," said Kanthasamy of the pathway. "Now we can focus on finding chemicals that may be able to control the mechanism."

Currently, there is no cure for Parkinson's and available therapies only treat the symptoms.

Symptoms of Parkinson's disease include trembling in hands, arms, legs, jaw, and face; rigidity or stiffness of the limbs and trunk; slowness of movement; and impaired balance and coordination. As these symptoms become more pronounced, patients may have difficulty walking, talking, or completing other simple tasks.

Because the disease typically affects people over the age of 50, the National Institutes of Health anticipates the incidence of Parkinson's will increase as the nation's population ages.