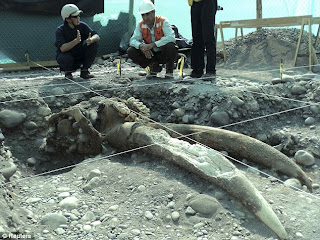 This is the first intact mastodon skull found in .  Yet it is a reminder that the genus made it not just into North America, but also into .

The extinction of large animals in the Northern Hemisphere can be explained by the event that I have named the Pleistocene nonconformity which initially decimated the extant populations.  We can easily surmise that the remainder was hunted out by early man who had the tools.  The problem I have with all that is the African Elephant particularly.  It never was successfully hunted by well equipped local tribesmen before the advent of modern arms.

That it could be hunted is irrelevant, it simply never was properly exploited.  Thus I find the human agency theory for both uncomfortable, just as the Pleistocene Nonconformity also failed to actually eliminate all individuals.  And the argument of habitat change simply does not fly with a mastodon that eats brush.

As this item reminds us, this creature was able to populate every valley on earth at will, and only a handful ever pulled that feat off.

On top of that the mastodon was a forest dweller, quite able to protect itself.  Recall that no one in his right mind is going to sneak up on an elephant in the woods and stick a spear into its gut.  There is plenty of easier ways to make a meal.

They almost certainly would have been trapped in a pit at the least.  They were also likely too clever to run over a cliff or even be stampeded.   Certainly, African elephant do not look likely to ever stampede, unless it is over their tormentors.

The fact remains that the genus is incredibly successful.  Yet we have huge extinction events that can not be properly explained.  Even the Indian Elephant avoided extinction and it was exposed to some of the worse land disturbances if we accept the consequences of the Nonconformity.  In fact all obvious threats are just as obviously survivable.  These creatures were never thin on the ground and vulnerable to over hunting at all.  Besides, you would only learn to hunt them if they were common enough to make it worthwhile.  Even in , that turned out to be an unattractive proposition.

On top of that, the end of the Ice Age would have naturally expanded their range and they would have easily adapted to warmer conditions.

One other option that does work is that they were deliberately hunted out by an ancestral human stock with access to modern tools.  We could today choose to eliminate all elephants quite easily and could also reduce or eliminate a few other inconvenient large creatures.  I prefer not to use that option, except that the genus was just too successful globally to simply disappear easily.

The skull and tusks of a giant primitive elephant that died up to 2million years have been discovered by builders in , it emerged today.

The mastodon, around the same size as modern elephants, is thought to have roamed  forests and plains before dying and sinking into a swamp that preserved it.

The find, beside a river, could allow scientists to piece together more information about the DNA they share with their much bigger relative, the woolly mammoth.

Preserved: The remains of a mastodon discovered on the building site of a hydroelectric plant in Chile

It could also shed more light on the origins of elephants.

The discovery was made by contrustion workers building a hydroelectric power plant beside a river in Padre Hurtaldo, near the Chilean capital .

Digging into the ground, they first noticed the pointed end of one of the 4ft long by 6in wide tusks.

Paleontologists were called in and, after further excavation, discovered what is ’s first ever discovery of a complete mastodon skull.

Directed by Rafael Labarca, of ’s PDI institute, told Chilean newspaper La Tercera: 'When we were in the excavation process we were aware that the bone continued. 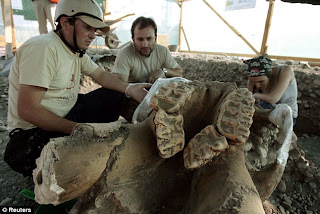 Intact: The discovery's is the first complete skull of the ancient creature ever made in Chile 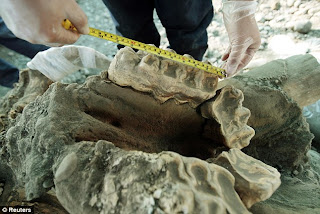 Big gnashers: The massive, crushing molar teeth that measure about 9in long

'Practically the whole skull complete and in perfect conditions, with its four molars and together with both tusks of almost four feet in length.

'In addition, inside the skull one was part of the vertebrae of the spine.'

Mastodons were around the same size as modern elephants but were much more heavily muscled and had furry coats to protect them from cold.

The ancestry of the elephant has long been a source of fascination for biologists.

Fossil evidence shows it began in around 50million to 60million years ago with moeritheres, pig-like creatures with long snouts. 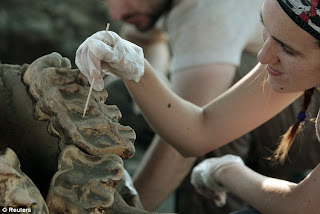 These animals evolved into a range of other species, many of them much larger, and spread across the globe, inhabiting every continent except Australasia and .

Biggest of all was the imperial mammoth, which adapted to the cold in Eurasia, Africa, and during the Pleistocene epoch 2million years ago.

It is believed that they are the closest relative of the elephants. Unlike, mastadons which eat shoots and leaves, mammoths were grazers.

Both species appear to have survived until just a few thousand years ago and early humans would have been familiar with them. 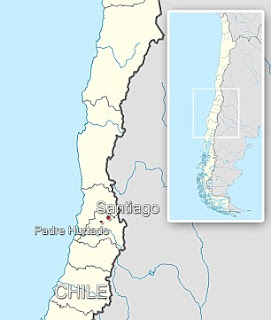 Padre Hurtado: Where the mastodon was found

It is believed that the evolution and extinction of many modern elephant species may be closely tied up with the spread of the human race.

Both mammoths and mastodons are proboscids, but the former is assigned to the mammutidae family, while the latter is of the eliphantitae.

Most excavations of mastodons have been made in . Very few have been discovered in the southern part of the continent.

Previously, only fragments had been found in , for example.

One of the biggest finds was made in 1993 at the reservoir outside of .

It yielded numerous remains and led to the site being nicknamed the "Valley of the Mastodons".

Current excavations are going on annually at the Hiscock Site in .

In July 2007, the longest mastodon tusks in the world – measuring 16ft and each weighing a ton – were discovered in Milia, north of .

Read more:
http://www.dailymail.co.uk/sciencetech/article-1369832/Mammoth-discovery-builders-unearth-rare-skull-tusks-ancient-beasts-relative-mastodon.html#ixzz1I6AroXLc
Posted by arclein at 12:01 AM