This places the first satellite in orbit around Mercury and will be a trove of new data.  As this item makes clear, it was a tough nut to crack even though we are doing this routinely with other planets. 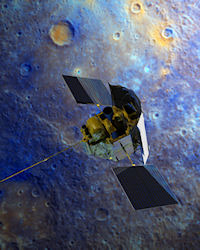 I expect we will soon have a good grasp of the possibilities in terms of establishing a real presence on the planet itself or even landing a Lander as we have done on Mars.

I wonder if there is a major mountain on Mercury as on Mars?

March 15, 2011: On March 17th, NASA's MESSENGER probe will become the first spacecraft to orbit Mercury. It's a seminal moment in planetary exploration. Researchers can finally take a good long look at a rocky world that is both akin to Earth and shockingly alien.

An artist's concept of MESSENGER gliding over the surface of Mercury. [more]

There's just one question: What's taken so long? Mercury is one of the closest planets to Earth and, at first glance, would seem to be readily accessible. Jim McAdams, mission design lead engineer, explains the problem:

"Mercury is going so much faster than Earth that a spacecraft must gain about 65,000 mph to catch it. And once you get there, you're face to face with the searing heat of the sun."

Only Mariner 10, which flew past the small planet briefly in 1974 and 1975, and MESSENGER itself have made the attempt to go there. Even after MESSENGER's own flybys in 2008 and 2009, Mercury remains the least explored planet.

Deep in the sun's gravitational well, Mercury is the planet most subject to the sun's powerful grip. The closer a planet gets to the sun, the faster it has to travel to balance the pull of gravity. Mercury travels at an average speed of 106,000 mph.

"MESSENGER must gain tremendous speed to catch Mercury," explains McAdams. "That's quite a challenge with current propulsion systems. But Chen-wan Yen, an engineer from JPL, came up with a clever trajectory that uses gravity assists from Venus and Mercury. I started with that trajectory, adding additional flybys to adjust both the launch and Mercury arrival dates."

The resulting loop-de-loop path MESSENGER has followed to slip into planet number one's orbit has covered about 5 billion miles, including 15 loops around the sun, and flybys of multiple planets.

As a spacecraft flies by a planet, the tug exerted by the planet flings the spacecraft in a new direction, giving it a boost and reshaping its orbit. The final itinerary for MESSENGER included flybys at Earth, Venus and Mercury itself to accelerate the spacecraft and deflect its path inward toward Mercury's path – all using very little fuel.

Meanwhile another challenge awaits – Mercury's "warm" welcome. The sun blazes up to 11 times brighter there than at Earth, and surface temperatures at Mercury’s equator can reach 450 degrees Celsius (840 degrees Fahrenheit). The small planet's hot dayside radiates much of that thermal energy back into space at a rate four times that at Earth.

Watch this animation to view the Mercury orbit insertion maneuver and the spacecraft’s first orbit around the planet.

"We solve this problem with a large sunshade made of ceramic fabric that withstands heat and protects the rest of the spacecraft," explains principal investigator Sean Solomon. "And the mission is designed to limit the time the spacecraft spends over Mercury's hottest areas."

Other high-tech materials are used in the solar arrays and science instruments to keep them within their working temperature ranges.

Researchers are anxious for new discoveries at Mercury. It's a planet of many mysteries: the most active planetary exosphere in the whole solar system, a surprisingly "live" magnetic field that has puzzled scientists for years, a core that makes up 60% of the planet's mass and is at least partially liquid, an intriguing landscape pitted with an interesting variety of craters and volcanic vents and marked by towering scarps that snake hundreds of miles across the planet's face. And that's just for starters.

MESSENGER is bristling with scientific instruments – high resolution imagers, lasers, and magnetometers – designed to solve these mysteries once and for all.