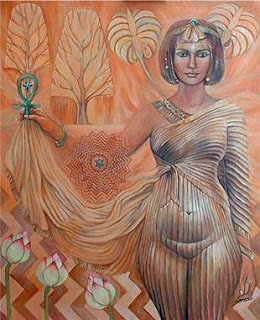 Biblical research is a gift that keeps on giving.  It is our one clear window into the lifeways of the Bronze Age and its culture.  Other scraps have survived, but none so completely as that of the Bible unless we accept much older lineages for some of the Indian Scriptures.  We should address that.

In the meantime, the original pantheon consisted of Yahweh and Asherah which is mirrored by all the other pantheons throughout the .  The cult of the one god appears to have been tolerated up to the Babylonian exile when the leaders chose to effectively suppress all other gods to create the modern Abrahamic religions.

The acted as a religious crucible for the Mesopotamian – Hittite cults, The Egyptian cults including Atan, and the Cult of Baal which appears to be at least the Mediterranean Phoenician cult.  We also have the Atlantean cult of Zeus and Poseidon identified.

It is startling to uncover ideas and practice that properly explain the often otherwise unexplainable.  Cross fertilization of these cults easily produce and even explain the most bizarre assertions.

I wonder how many prayers to Yahweh can be profitably rewritten as a prayer to the mother goddess.

GOD'S WIFE EDITED OUT OF THE BIBLE – ALMOST

God's wife, Asherah, was a powerful fertility goddess, according to a theologian.

God had a wife, Asherah, whom the Book of Kings suggests was worshiped alongside Yahweh in his temple in Israel, according to an scholar.

In 1967, Raphael Patai was the first historian to mention that the ancient Israelites worshiped both Yahweh and Asherah. The theory has gained new prominence due to the research of Francesca Stavrakopoulou, who began her work at and is now a senior lecturer in the department of Theology and Religion at the .

Information presented in Stavrakopoulou's books, lectures and journal papers has become the basis of a three-part documentary series, now airing in , where she discusses the Yahweh-Asherah connection.

"You might know him as Yahweh, Allah or God. But on this fact, Jews, Muslims and Christians, the people of the great Abrahamic religions, are agreed: There is only one of Him," writes Stavrakopoulou in a statement released to the British media. "He is a solitary figure, a single, universal creator, not one God among many ... or so we like to believe."

"After years of research specializing in the history and religion of , however, I have come to a colorful and what could seem, to some, uncomfortable conclusion that God had a wife," she added.

Stavrakopoulou bases her theory on ancient texts, amulets and figurines unearthed primarily in the ancient Canaanite coastal city called Ugarit, now modern-day . All of these artifacts reveal that Asherah was a powerful fertility goddess.

Asherah's connection to Yahweh, according to Stavrakopoulou, is spelled out in both the Bible and an 8th century B.C. inscription on pottery found in the Sinai desert at a site called Kuntillet Ajrud.

"The inscription is a petition for a blessing," she shares. "Crucially, the inscription asks for a blessing from 'Yahweh and his Asherah.' Here was evidence that presented Yahweh and Asherah as a divine pair. And now a handful of similar inscriptions have since been found, all of which help to strengthen the case that the God of the Bible once had a wife."

Also significant, Stavrakopoulou believes, "is the Bible's admission that the goddess Asherah was worshiped in Yahweh's in . In the Book of Kings, we're told that a statue of Asherah was housed in the temple and that female temple personnel wove ritual textiles for her."

J. Edward Wright, president of both The Arizona Center for Judaic Studies and The Albright Institute for Archaeological Research, told Discovery News that he agrees several Hebrew inscriptions mention "Yahweh and his Asherah."

"Asherah was not entirely edited out of the Bible by its male editors," he added. "Traces of her remain, and based on those traces, archaeological evidence and references to her in texts from nations bordering Israel and Judah, we can reconstruct her role in the religions of the Southern Levant."

Asherah -- known across the ancient Near East by various other names, such as Astarte and Istar -- was "an important deity, one who was both mighty and nurturing," Wright continued.

"Many English translations prefer to translate 'Asherah' as 'Sacred Tree,'" Wright said. "This seems to be in part driven by a modern desire, clearly inspired by the Biblical narratives, to hide Asherah behind a veil once again."

"Mentions of the goddess Asherah in the Hebrew Bible (Old Testament) are rare and have been heavily edited by the ancient authors who gathered the texts together," Aaron Brody, director of the and an associate professor of Bible and archaeology at the of Religion, said.

Asherah as a tree symbol was even said to have been "chopped down and burned outside the in acts of certain rulers who were trying to 'purify' the cult, and focus on the worship of a single male god, Yahweh," he added.

The ancient Israelites were polytheists, Brody told Discovery News, "with only a small minority worshiping Yahweh alone before the historic events of 586 B.C." In that year, an elite community within Judea was exiled to and the in was destroyed. This, Brody said, led to "a more universal vision of strict monotheism: one god not only for , but for all of the nations."