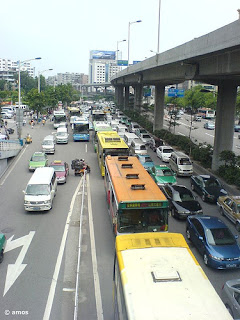 The astonishing thing about all this is that common sense is enough and actually performs better than an obviously engineered solution.  Throw away the silly rule book and let common sense and individual need work it out.

Perhaps we need to apply this to a lot of other problems.

Certainly where the commons is very much in force, such as fishing, early reports are promising. A fishing cooperative is formed to manage a geographical region and manage the resource.  All of a sudden stakeholders have incentives to both repair damage , to improve the environment and to educate others.

Such attention has been enough to restore parts of the original local fecundity.  Supporting this is an obvious way to go without spending public funds foolishly.

Sandy Ikeda is an associate professor of economics at Purchase College, SUNY, and the author of The Dynamics of the Mixed Economy:Toward a Theory of Interventionism. ... See All Posts by This Author
Wabi-sabi | Sandy Ikeda

As an economics professor, I often witness the surprise of my students when I explain how something as important as the market for food or clothing is self-regulating.  True, there are quality and safety regulations that attempt to control potential hazards “around the edges” of these vital markets, but by far the heavy lifting is done by competition among rival firms in the same industry.  Trying to sell tainted food or shoddy clothing in a competitive market without special privileges will either put you out of business or make you very quick on your feet.

And I get great satisfaction when I see students realize that advertising, free entry, and entrepreneurship, in the context of economic freedom, are what keep goods and services safe, cheap, and of good quality.  Witness what happens when drugs and prostitution are prohibited: overly concentrated, dangerously mixed narcotics and significantly higher rates of sexually transmitted diseases, both accompanied by violence and corruption.  Here government intervention thwarts self-regulation.

The Nonmarket Foundations of the Market Process

In the past dozen years or so, as a result of my research interest in the economy of cities, which was sparked by my discovery of the writings of Jane Jacobs, I’ve come to appreciate more and more the nonmarket foundations of the market process.  Some of this has been reflected in previous Wabi-sabi columns that were concerned with social networks (most recently last week but also here).  Without norms that say, for example, treating strangers fairly and trading with them is good, or that lying to and stealing from strangers is bad, human well-being couldn’t have soared to the heights of the past 200 years, especially the last 60.  Now obviously none of this would have happened either without the widespread acceptance of private property, freedom of association, and the rule of law.  But norms of trust and reciprocity, conventions of fair play, and the like are what has enabled ordinary people to really harness these social institutions.

In a similar vein, Elinor Ostrom, winner of the 2009 Nobel Prize in economics, has spent a lifetime studying how communities in culturally diverse locations around the world – including Spain, Switzerland, Japan, and the Philippines – have found ways to solve “common pool resource” (CPR) problems.  These arise when a valuable resource, such as a river or a forest, is not owned entirely by any person or group, a condition that can create powerful incentives for individuals (“appropriators”) to overuse the CPR to the long-term detriment of the entire community.  Each individual appropriator might realize that self-restraint is in her own as well as her neighbors’ interest, but if she believes those neighbors will opportunistically free-ride on her self-restraint, she too will be sorely tempted to free-ride.

Ostrom found that in the majority of the successful cases that she studied, the appropriators themselves, mostly or entirely without help from the government, established rules, conventions, and enforcement mechanisms effective enough to keep overuse and conflict to a minimum and flexible enough to adjust to changing circumstances over long periods, sometimes centuries, while preserving the CPR.  Again, these complex arrangements were essentially self-organizing and self-regulating.  These kinds of CPR situations appear in many places, including on the streets of a major metropolis.

I recently showed my students a short video about a radical way of addressing problems of traffic congestion: accidents, pollution, and time wasted on the road.  This idea has been spreading across northern Europe, including the , , and now the .  It’s quite simple:  Remove traffic lights, cautions, and marked pedestrian crossings.  There are also no legal priorities given to vehicles, pedestrians, or bicyclists.  In principle a driver or bicyclist could go through an intersection without stopping for anyone; a pedestrian could cross anywhere at any time.  All would still be liable for any injury or damage their actions might cause, but no one would be guilty of a traffic violation insofar as there were no laws or regulations to violate.

Instead of chaos, the result has uniformly been fewer accidents and injuries, a smoother flow of traffic, even in busy , and perhaps less pollution from needlessly idling vehicles.  Without signs to guide (or distract) them, drivers are far more careful and aware when they approach an intersection, pedestrians more cautious when crossing the street.  Common sense and norms of civility prevail for the most part.  It’s undoubtedly true that the initial intersections were chosen for this experiment because of their potential for success.  Still, in the video you don’t see pedestrians fearfully scampering across the street or cars chaotically fighting for the right-of-way. On the contrary, cars, walkers, and bicyclists rather politely intermingle, as equals, as they negotiate the unmarked intersection.

No one announced what norms of civility people should observe in the traffic commons, nor what rules of crossing they should follow.  Instead, ordinary people simply used their eyes and their brains.  Order emerged, like those communities Ostrom studied that successfully preserve common pool resources. The appropriators — the drivers and pedestrians — regulate their own behavior because no one wants to cause an accident.  It’s common knowledge that most of the rules of the road are unwritten anyway — which raises the question of whether any of them should be written at all.

When I saw this video I was reminded of when I was in in 1984 trying to cross one of those 100-yard-wide (or so it seemed) boulevards filled with a thick, endless stream of bicyclists.  I stood paralyzed on the edge of the traffic until our guide told me that I should simply start walking through, slowly but without stopping, and the bicyclists would avoid us (a little like a cowboy wading through a herd of cattle) – and they did!

You couldn’t do that safely in the congested streets of today, of course.  But without all those traffic regulations giving everyone a false sense of security, some day you might.