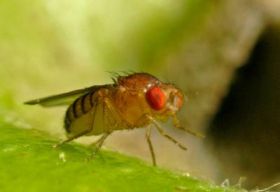 Then surprise here is that it appears that a fruit fly is able to detect the difference in vibration energy by isotopes of hydrogen at least and is suggestive that larger isotopes may also be detected.

How about developing fruit flies able to collect specific atoms or selected isotopic molecules?  It may well be superior to a centrifuge.

Probably too much effort and not particularly easy, but it is an independent route.

Collecting tritium could be important, though density is possibly way too low.

(PhysOrg.com) -- A new study by researchers in and the has found that fruit flies can discriminate between normal and heavy hydrogen (deuterium) isotopes, which adds weight to a new theory of how the sense of smell works.

Dr Efthimios Skoulakis of the Alexander Fleming Biomedical Sciences Research Center in Vari, and colleagues presented fruit flies(Drosophila melanogaster) with acetophenone, an odorant molecule often used in perfumes, in a T-shaped maze. In one branch the molecule contained normal hydrogen, while in the other the hydrogen atoms in the molecule were replaced by deuterium. The flies were able to choose the branch they preferred.

The fruit flies’ ability to discriminate between the molecules was also demonstrated by successfully giving the flies mild electric shocks to their feet as they walked on the floor of the maze to condition them to selectively avoid either form of the molecule.

Dr Skoulakis said the results support a new theory of olfaction first proposed in 1996 by co-author Dr Luca Turin, a biophysicist who is now at the Massachusetts Institute of Technology in Cambridge in the US. The new theory suggests odorants are detected by their vibrations rather than by their shape.

Deuterium differs from the normal isotope of hydrogen in that its nucleus contains a proton and a neutron instead of just a proton. This roughly doubles the mass of the deuterium atom, and so while it has similar properties to normal hydrogen, the larger mass means bonds between deuterium and other atoms within molecules vibrate more slowly.

The leading theory of how smell works is that odorant molecules are detected by receptor proteins in the olfactory membranes because of their shape, which fits into the shape of a cavity in the protein, like a key in a lock. If the molecule fits a signal is sent to the brain.

Dr Turin’s theory is that the electrons of the odorant might be able to cross a receptor membrane only if the bonds in the molecule are vibrating at exactly the right frequency.

Since an odorant with normal hydrogen will have different vibrational properties to the deuterated odorant, the two odorants should smell different even though their shape is the same.

As further confirmation the researchers tested the fruit flies with nitriles, which have a similar vibrational frequencies to that of deuterium-carbon bonds. The fruit flies had an aversion to the nitriles as expected.

Humans have not been shown to have the ability to discriminate between compounds containing normal and heavy hydrogen, but Dr Turin said there were unpublished reports of a similar ability in at least one dog, which ignores an odorant it is trained to detect if the molecule is deuterated.

The paper is published in the journal Proceedings of the of Sciences (PNAS).
More information: Molecular vibration-sensing component in Drosophila melanogaster olfaction, PNAS, Published online before print February 14, 2011,
doi:10.1073/pnas.1012293108