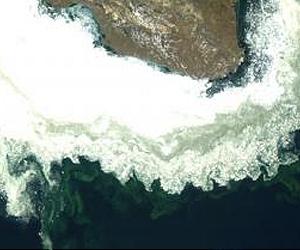 Up until last year, we had a decade of general ice loss in the .  This led to more open water and the earlier blooms noted here.  As the ice retreats, the expands its food chain hugely.

After this winter, I am expecting a powerful reversal of this behavior, so we will have our eyes open for reports.  We should have a late spring breakup.  In , the cherry blossoms are just now breaking out.  No February bloom this year and no lost ski days.

So all of had a severe winter by any standard.

Yet what is important here is that this work independently confirms the decadal change that took place in the .

Warming temperatures and melting ice in the may be behind a progressively earlier bloom of a crucial annual marine event, and the shift could hold consequences for the entire food chain and carbon cycling in the region.

Scientists at Scripps Institution of Oceanography at UC San Diego, along with colleagues in Portugal and Mexico, plotted the yearly spring bloom of phytoplankton-tiny plants at the base of the ocean food chain-in the Arctic Ocean and found the peak timing of the event has been progressing earlier each year for more than a decade. The researchers analyzed satellite data depicting ocean color and phytoplankton production to determine that the spring bloom has come up to 50 days earlier in some areas in that time span.

The earlier Arctic blooms have roughly occurred in areas where ice concentrations have dwindled and created gaps that make early blooms possible, say the researchers, who publish their findings in the March 9 edition of the journal Global Change Biology.

During the one- to two-week spring bloom, which occurs in warm as well as cold regions, a major influx of new organic carbon enters the marine ecosystem through a massive peak in phytoplankton photosynthesis, which converts carbon dioxide into organic matter as part of the global carbon cycle. Phytoplankton blooms stimulate production of zooplankton, microscopic marine animals, which become a food source for fish.

Mati Kahru, lead author of the study and a research oceanographer in the Integrative Oceanography Division at Scripps, said it's not clear if the consumers of phytoplankton are able to match the earlier blooms and avoid disruptions of their critical life-cycle stages such as egg hatching and larvae development.

"The spring bloom provides a major source of food for zooplankton, fish and bottom-dwelling animals," he said. "The advancement of the bloom time may have consequences for the Arctic ecosystem."

Such a match or mismatch in timing could explain much of the annual variability of fish stocks in the region.

"The trend towards earlier phytoplankton blooms can expand into other areas of the Arctic Ocean and impact the whole food chain," say the authors, who used satellite data from 1997-2010 to create their bloom maps.

The Biology and Biogeochemistry Program and the National Science Foundation provided financial support for the research. The satellite data were provided by the NASA Ocean Biology Processing Group, ESA GlobColour group, the National Snow and Ice Data Center and the Japan Aerospace Exploration Agency. Kahru's coauthors include Greg Mitchell, a Scripps Oceanography research biologist, Vanda Brotas of the University of Lisbon in Portugal and Marlenne Manzano-Sarabia of Universidad Autonoma de Sinaloa in Mexico.
Posted by arclein at 12:01 AM