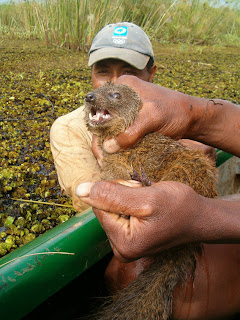 Again we shatter the smug assumption that every large animal has been discovered and even collected.  As I have posted extensively, there is a whole slew of nocturnal creatures out there we have little chance of observing unless we stumble into each other.

Nocturnal means just that.  They den up in daylight were no one can find them.  At night they hunt their preferred game and they avoid us and our dogs.  If observed at a distance, they are easily mistaken for a wild dog or the like. Look at this critter.

Classical biology needs a renaissance in which thousands of young researchers get out there and adopt their private puddle and observe and identify.  It is happening in archeology and needs to happen in biology.  Perhaps we start in the high schools.

I got my initial training in biology the old fashioned way on a nineteenth century farm of a hundred or so acres and accessible woodlands totaling an additional hundred acres.   I located every known recognized wild plant in my locale for the province including some that were rare at best.  I spotted birds of all kinds and even observed a full range of wildlife including grouse and a bobcat over the years.  It was a good use of free time for a high school student.  Of course we also farmed.

Biology needs those boots on the ground and knowledgeable eyes.

Researchers have identified a previously unknown species of carnivore lurking in one of the world's most endangered lakes.

Durrell's vontsira (Salanoia durrelli), named in honor of the late conservationist and writer Gerald Durrell, was first photographed swimming in 's in 2004. Subsequent surveys by scientists at the Durrell Wildlife Conservation Trust, the , , Nature Heritage, , and Conservation International confirmed the mongoose-like creature was indeed a new species.

"We have known for some time that a carnivore lives in the Lac Alaotra marshes, but we’ve always assumed it was a brown-tailed vontsira that is also found in the eastern rainforests," said Fidimalala Bruno Ralainasolo, a conservation biologist working for Durrell Wildlife Conservation Trust who originally captured the new carnivore. "However, differences in its skull, teeth, and paws have shown that this animal is clearly a different species with adaptations to life in an aquatic environment."

Durrell's vontsira is the first new carnivorous mammal discovered in in 24 years. Little is known about the species, which is roughly the size of a cat and is described in the latest issue of the taxonomic journal Systematics and Biodiversity.

"It is a very exciting discovery. However, the future of the species is very uncertain." 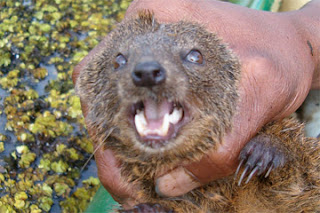 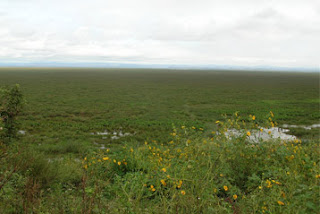 Lac 's largest lake, was the country's rice bowl, responsible for feeding a large part of the island's population. At one time the vast lake was surrounded by tropical forest, but today this has been cleared for agriculture, and the hills are now bare and riddled with "lavaka," deep, red, eroded gullies. With rain - the soil left unprotected without forest cover - tons of red earth bleed into the lake, leading it to disappear. Today the lake has a maximum dry season depth of only two feet (60 cm) and the region can no longer produce enough rice to supply the growing population

Lac Alaotra is 's largest, and most endangered lake. Sedimentation from deforested watersheds, pollution from pesticides and fertilizers, and burning and agricultural conversion of the lake's reed beds have left Lac Alaotra's ecosystem in dire straights.


Habitat loss and introduction of alien plants have already driven at least well known species to extinction: the Alaotra grebe (Tachybaptus rufolavatus), which was last seen in 1985.


"This species is probably the carnivore with one of the smallest ranges in the world, and likely to be one of the most threatened," said Frank Hawkins of Conservation International. "The Lac Alaotra wetlands are under considerable pressure, and only urgent conservation work to make this species a flagship for conservation will prevent its extinction."
Posted by arclein at 12:01 AM