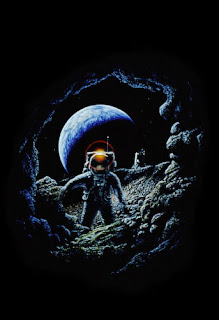 This cave is actually huge and as understood, it is ideal for establishing a lunar base.  As usual everyone forgets the third dimension in these things.  It may be 120 meters wide but that really means its diameter is also close to the same figure.  Thus it is reasonable that a cross section of seven thousand square meters will provide at least 25 stories or about 2500 meters of horizontal space.  This translates easily into 5,000,000 square meters of usable living space that can be constructed inside the lava tube.

Without question, these lava tubes solve a lot of problems and provide a secure working environment that will be easy to protect against breaches.

Otherwise surface structure will need radiation protection and that is expensive to haul in.  Besides, the best protection will always be feet of rock.  In fact, the building of space habitats may well necessitate the use of space rock to provide reasonable protection from the huge range and variability of the solar flux and other cosmic rays.

Or it may turn out to be always the cheapest and simplest solution to hand anywhere.

Jesus Diaz — Back in 2009, the Japanese Space Agency JAXA announced moon hole deep enough to contain a small human base. Now, the Indian Space Research Organization has discovered a "giant underground chamber" near the Moon's equator, in the Oceanus Procellarum area.

The huge cave— discovered by the Chandrayaan-1 spacecraft—is more than one mile long (1.7 kilometers) and 393 feet wide (120 meters). By comparison, the vertical hole that Jaxa discovered was only 213 feet (65 meters across) and 289 feet deep (88 meters). This new chamber is big enough to contain a small lunar city or a secret Nazi base with a few thousand UFOs.

The Indian researchers have published a paper detailing their findings and talking about the possibility of making this giant underground vault as a future human base. The settlement would be protected from radiation, micro-meteor impacts, dust and extreme temperature changes by the lava structure:

They also point out that explorers would only need minimal construction, without the added cost of having to use expensive shields against the hazardous lunar environment.
If humans ever colonize this chamber, I hope they call the city Attilan. [Silicon India]

ISRO finds cave in moon, can be used as base station for astronauts

: Scientists at the Indian Space Research Organization have discovered a giant underground chamber on the moon, which they feel could be used as a base by astronauts on future manned missions to moon.


An analysis by an instrument on Chandrayaan-1 revealed a 1.7-km long and 120-metre wide cave near the moon's equator that is in the Oceanus Procellarum area of the moon that could be a suitable 'base station' for future human missions.
Bottom of Form


Scientists of the Space Applications Centre in Ahmedabad said in a research paper published in the latest issue of Current Science that the cave provides "a safe environment from hazardous radiations, micro-meteoritic impacts, extreme temperatures and dust storms."

Scientists said identifying sites for permanent base for human settlements on the moon is important for further exploration.

"Lava tubes provide a natural environmental control with a nearly constant temperature of minus 20 degrees Celsius, unlike that of the lunar surface showing extreme variation, maximum of 130 degrees Celsius to a minimum of minus 180 degrees Celsius in its diurnal (day-night) cycle," they said.


According to them, the lava tubes offer a dust-free environment and adapting them for human use requires minimal construction.

Are they absolutly sure the cave isn't already inhabited? http://hubpages.com/hub/UFONo-Part-two