Law and Freedom and the Emergent Demos 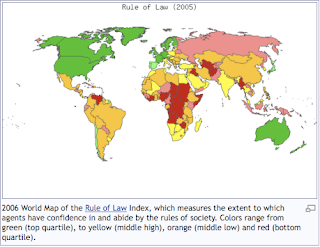 Somewhere successful government is the balanced combination of the rule of law and democratic choices.  This essay discusses this at length and is worth the read.

Present volatility in the Arab world has begun the process of cutting the autocracies free, just as happened a generation ago in both the communist world and the Latin World in particular.

If we have learned anything, it is that the process is naturally jerky.  Few modern democracies are yet in place, but they are all clearly evolving toward just that.  Yet most began with their people hitting the bricks and that possibility informs all leaders today in those post revolution countries.  Everyone senses a real limit to their authority.  Even the Chinese sense it.

There are still autocracies out there and they are all now rethinking their options.  Most will continue to coast only because their people will let them.

The Rule of Law and Freedom in Emerging Democracies: A Madisonian Perspective

There Is No Viable ""
James A. Dorn

The collapse of communism in 1989 in Eastern and Central Europe, and the fall of the Soviet Union two years later, have increased the number of democracies in the world to a total of 120. Of those, however, only 85 are classified as “free” by Freedom House—a stark reminder that creating a free society requires limiting government. That in turn requires limiting majority rule and protecting property rights.

Individual rights will then lose ground to special interests, and civil society will be weakened as all aspects of life become politicized. Instead of becoming less visible, the state will become more powerful.

For , “The essence of government is power; and power, lodged as it must be in human hands, will ever be liable to abuse.” The fundamental question that concerned Madison, and the other framers of the Constitution, was how to prevent the abuse of governmental power while protecting individual rights to life, liberty, and property.

’s goal was to create a basis and structure of government that would protect persons and property and stand the test of time. His goal was justice under the law of liberty.

In ’s view, justice, liberty, and property are inseparable: “That alone is a just government,” wrote , “which impartially secures to every man, whatever is his own.” Like Hayek, viewed justice as “rules of just conduct,” not as some officially sanctioned distribution of income that satisfies some subjective criterion of “social justice.”

True justice requires the protection of property rights, not the promotion of the welfare state. No one has the right to be compassionate with other people’s money.

adhered to the classical-liberal view of democracy, which is consistent with limited government and the rule of law, rather than to the modern liberal view in which democratic government is virtually unlimited. In 1837, a year after Madison’s death, John O’Sullivan, the political editor of The Democratic Review, wrote: “The fundamental principle of the philosophy of democracy” is “to furnish a system of the administration of justice [in the Madisonian sense], and then leave all the business and interests of society to themselves, to free competition and association, in a word, to the voluntary principle”—that is, to the “principle of freedom.”

That view of democracy clashes with the welfare state and its open-ended vision of democratic government. Today, in both emerging and mature democracies, the rule of law and freedom have been sacrificed to majoritarian politics—a danger warned against.

Madison supported limited government not only because he thought it was just but because he recognized, as did Adam Smith, that limiting government to the defense of persons and property prevents corruption and lays the basis for the emergence of a spontaneous market order and wealth creation.

favored free trade and opposed government intervention. He called himself a “friend to a very free system of commerce” and regarded as self-evident the notion “that commercial shackles are generally unjust, oppressive, and impolitic.” He recognized that “all are benefitted by exchange, and the less this exchange is cramped by Government, the greater are the proportions of benefit to each.”

In 1792 wrote, “ and order will never be perfectly safe, until a trespass on the constitutional provisions for either, shall be felt with the same keenness that resents an invasion of the dearest rights; until every citizen shall be an Argus to espy.”

Argus, of course, refers to a giant with 100 eyes who acts as a guardian—in ’s case, a guardian of our liberties. In a free society, citizens must be vigilant and be able “to espy”—that is, to see at a distance—and use reason to discern the long-run implications of alternative policies.

Unless people learn to judge policy from a constitutional or long-run viewpoint, and not just consider it in the postconstitutional setting of majority rule, they will lose their freedom. By taking a long-run view and exercising “right reason,” individuals are more likely to agree to constitutional limits that insulate economic life from politics and prevent “rent”-seeking behavior that redistributes, rather than creates, wealth. That is a point James M. Buchanan, founder of the Public Choice school of economics, has so eloquently stated.

There are several important lessons that emerging democracies can learn from ’s constitutional vision:

For true democracy to prevail, government must be limited and must be just; the security of persons and property must take precedence over electoral politics.

To prevent rent-seeking and corruption, economic freedom must prevail; people must accept a rule of law that treats people equally under the law and safeguards private property rights and freedom of contract.

A spontaneous market-liberal order will arise to coordinate economic activity and create wealth, provided the government minimizes its role in the economy and lets people be free to choose.

A free society cannot coexist with a redistributive state—there is no “”; people must be ever vigilant to ensure that majorities are prevented from violating the rights of minorities in the name of distributive justice.

How quickly those lessons are learned in countries making the transition to democracy will depend crucially on the size and scope of government in the old regime and the duration of the old regime. For countries that had all-powerful governments and central planning for long periods of time, the transition to a liberal democratic state with the rule of law and free markets cannot be expected to occur as quickly as in countries with smaller governments, some experience with markets, and a memory of freedom.

The Freedom House rankings for democratization and economic liberalization for ex-communist countries, as of June 1999, show that nearly all of the post-Soviet states, or Newly Independent States, lag significantly behind Eastern and Central European countries that had previous experience with a liberal political and economic order.

That is making such slow progress should not be surprising; it takes time to change one’s thinking after so many years under totalitarian rule. As Alexander Tsypko, a professor of philosophy at Moscow State University, wrote in the Cato Journal in 1991, just prior to the collapse of the Soviet Union: “It is hard—very hard—to admit that your life and your work are being senselessly wasted and that you are living in an unnatural, false society, headed with your country for the dead end of history.”

The future of limited government in emerging democracies will depend on adherence to the rule of law and justice in the Madisonian sense. Citizens and leaders need to think about the proper scope of government and recognize the dangers of universal suffrage when there is no effective limit to the scope of government. ’s fundamental question is still relevant today, namely: How can we protect individual rights against majoritarian interests that violate private property rights?

In conclusion, emerging democracies need to consider the long-run implications of alternative rules, not just look at short-term policy options for redistributing income and wealth. They need to foster an ethos of law and liberty. Moreover, they need to recognize that change will take time and that there is no viable “.” Ultimately, political freedom requires economic freedom, and vice versa. To protect both requires limited government.

Perhaps the biggest challenge for the future of limited government is to move toward the rule of law and freedom. China’s leaders should heed the advice of Jixuan Hu, who recently wrote:

··By setting up a minimum group of constraints and letting human creativity work freely, we can create a better society without having to design it in detail. That is not a new idea, it is the idea of law, the idea of a constitution. Real constitutional government is a possible alternative to the dream of a perfectly designed society. . . . The idea is to apply the principle of self-organization.

History has proven that was right and Marx was wrong. The future of freedom and democracy rests with the Madisonian vision of limited government. Let us salute the “great little .” One person can make a big difference!

What a great article this is...to me. Lots of great information to learn from and study. Do disagree with some of it, but maybe not as much as I think. We'll see. I plan to study it and respond to it in many places, which is what it deserves.

For example. I found the following sharing to be exciting:
"In 1792 Madison wrote, “Liberty and order will never be perfectly safe, until a trespass on the constitutional provisions for either, shall be felt with the same keenness that resents an invasion of the dearest rights; until every citizen shall be an Argus to espy.”


"Argus, of course, refers to a giant with 100 eyes who acts as a guardian—in Madison’s case, a guardian of our liberties. In a free society, citizens must be vigilant and be able “to espy”—that is, to see at a distance—and use reason to discern the long-run implications of alternative policies."

You see, I have never heard of "Argus", which I see as a great word to describe a "Responsible American Citizenry Of American Direct Democracy". (Eventually an "Enlightened Majority" that would protect all "Worthy Minority" elements of Our Society.)
Gonna open a Yahoo Group of this name. Thanks Robert Klein. (?) Just this word alone is very valuable to me.

I'm betting that much more of this sincere effort will produce good wood for the fires of True Democracy as well.