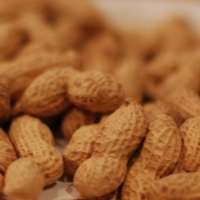 This is an important development for those who have this dangerous allergy.  They have shown that a regimen that uses a slow increase in exposure in combination with chocolate is able to increase ones ability to consume peanuts a thousand fold.  I still think that one would not be eating peanut butter sandwiches, but that the occasional nut in a cookie may be well tolerated and plausibly enjoyed.

Previous efforts at desensitization had been disappointing.  This is very good news for sufferers and should be soon readily available in the form of chocolate consumables.

The important thing for sufferers is to mitigate the risk so that accidental injection does not mean a desperate trip to the emergency ward.  This clearly meets that particular need and will relieve care givers of the extra precautions that have become necessary.

Allergy experts at the have convincing evidence that a new treatment for peanut allergies is effective, following a three-year trial.

The trial, from the group of Dr Pamela Ewan of the Department of Medicine and conducted at Addenbrooke's Hospital, involved a careful regime of feeding chocolate containing peanut flour in gradually increasing doses to patients with severe peanut allergies.

Following on from a small clinical trial conducted in 2009, the allergy team carried out a larger trial involving 22 children.

Dr Andrew Clark, who led the clinical trial, said: "This is the first time that a peanut allergy study has shown such a high level of success and proves that it is possible for peanut allergic patients to eat peanuts without fear of a severe reaction."

The children and teenagers attended the hospital's clinical research facility to undergo the desensitization treatment, which still proved effective six months on.

Peanut allergy is common, affecting between one and two percent of young children and can cause severe or even fatal reactions. There is currently no satisfactory treatment. The diagnosis has a major impact on families, because of the fear of a severe reaction and anxiety in making food choices.

"The lives of the families involved in this trial have been transformed," said Dr Clark
. "The amount of peanut that could be tolerated by the children and teenagers on this trial increased 1000-fold."

Studies of peanut immunotherapy from other centres, using different regimes have been less successful. The regime involves more gradual increases in dose but eventually a much higher dose of peanut is tolerated.

"This treatment could drastically improve the lives of those currently suffering with severe peanut allergies," said Dr Maher Khaled of , the University's commercialisation group. "We are currently looking to make this groundbreaking treatment more widely available."

The findings are published today, 18 March, in the journal Clinical and Experimental Allergy. The study was supported by a grant from the Evelyn Trust, and further work is supported by the National Institute for Health Research.