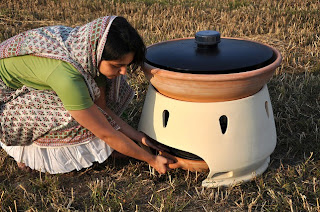 It produces enough fresh water for a single individual. Any waste water could also be used of course.

The two vessels are stilled connected with manufactured tubing and the top container need to be sealed to produce pressure. It would be better to do something clever and cheaper than what is shown here.

Black enameled metal will also work well and producing an inverted bowl for the bottom of the container will reduce the total volume and generally allow more fluid to be in contact with hot metal. The bottom container is not so nearly ctritical and could easily be any standard basin basin and the cone a metal lid with a formed lid to hold inside the basin's edge.

We have already established that the volume will be a gallon per day so there is no reason to allow a volume greater than that in the top device.

This is certainly a welcome idea.

The Eliodomestico costs US$50 to build (Image: Gabriele Diamanti)

Sometimes the simplest ideas are the best. Concerned about the lack of fresh water in the developing world, designer Gabriele Diamanti wanted a solution to desalinate water that was available to households rather than relying on giant, centralized plants. He also wanted it to be something inexpensive that could be made by local craftsman. The result is a ceramic solar still called the Eliodomestico that operates like an “upside-down coffee percolator”.

The open-source design of the Eliodomestico is remarkably simple. It consists of two ceramic pieces that sit one atop the other. Inside the top piece is a black container into which salt water is poured. The sun heats the container, turning the water to steam. As pressure builds, the steam is forced down a tube into a container in the lower piece. There it condenses against the lid and collects in the basin of the container.

The Eliodomestico collects about five liters (1.09 gal) of fresh water per day and costs about US$50 to build with no operating costs. The bottom container’s basin is designed to be transported on the head, which is a common practice in developing countries.

The design was a finalist at Prix Emile Hermès competition 201, received special mention at the Well-Tech Award 2012 and was the pro winner of the Core77 Design Awards 2012, social impact category.

Hi arclein,
I think it's really needed for our present environment.