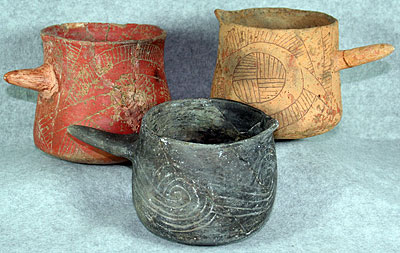 The drink is from Yaupom holly and was used by the colonists also. It is noted that excessive amounts induce vomiting and that other hollies definitely induce vomiting. How certain all that is, I will leave to another guinea pig.

The take home is that the south east had a source of caffeine that they used for their powwows just as we do. It has now been nicely confirmed that it was used for centuries at least and that the mugs discovered were indeed for the drinking of this beverage.

This s an interesting bit of natural history and perhaps we will see some version on the market some day. Apparently it needs to be roasted if one wishes to make some.

Analysis of 'black drink' residue in ceramic vessels at Cahokia

Researchers from across the United States, including Millsaps College Professor of Chemistry Timothy Ward, Ph.D., and Research Fellow Jiyan Gu, Ph.D., have analyzed chemical residues in prehistoric Native American ceramic vessels that are believed to offer the earliest known evidence for black drink consumption. Their findings were published in the on-line Proceedings of the National Academy of Sciences in August.

Black drink is a caffeinated tea-like beverage brewed from holly leaves and stems that was used during cleansing rituals and religious ceremonies. The ceramic vessels tested date to approximately 1050-1250 A.D. and are associated with the prehistoric Native American civilization of Cahokia, once located near present-day St. Louis.


Chemists at Millsaps College's W.M. Keck Center for Instrumental and Biochemical Comparative Archaeology in Jackson, Miss. designed and developed the methods to identify the chemical compounds found in residue from porous, unglazed mug-shaped ceramic containers excavated from sites in Missouri and Illinois. Ward and Gu led the development of the chemical methods and oversaw the chemical analysis and data generation. The chemists differentiated between the presences of several substances to identify a chemical signature, or bio-marker, for the holly species Ilex. The work was funded in part by the W.M. Keck Foundation.


A remarkable aspect of the research project is that undergraduate students from Millsaps College conducted the chemical analysis, working under the direction of Ward and Gu.


"At Millsaps, students in the sciences learn to operate sophisticated instruments and participate in research normally reserved for graduate students in the latter years of graduate study," Ward said. "Such notable experiences build the resumes of Millsaps graduates in ways that make our students sought after by graduate research programs and medical schools. Interestingly, the most often asked question of our students at the various national and international meetings where we present is always, "Did you really do that work yourself?'"


Since conducting the research, Berch and Redman graduated from Millsaps with bachelor's degrees in chemistry. Berch is a medical student in the Rural Physicians Program at the University of Mississippi School of Medicine, and Redman is studying analytical chemistry at the graduate level at the University of North Carolina. Ali, a biochemistry major, is a junior at Millsaps College.


"One thing impressive and interesting about the Keck Center at Millsaps is that it is staffed with a diverse group of undergraduates with unique backgrounds," Gu said. "We have students born in America, Vietnam and Pakistan as well as international students that have come from China and Rwanda. Students not only work together in the lab, but they build friendships and learn from each other's unique perspectives, exchanging their favorite music, stories from their native country, ideologies and their dreams.


"The Keck Lab is a small reflection of Millsaps culture, a culture that will prepare students for a world full of diversity, a world in which the great things can only be achieved by working with people from different background and perspective."


Sociologists and chemists cited equally as authors in the study are Gu; Ward; University of New Mexico Distinguished Professor of Anthropology Patricia Crown, working with Thomas E. Emerson from the Illinois State Archeological Survey, Prairie Research Institute and University of Illinois, Champaign; W. Jeffrey Hurst at the Hershey Technical Center in Hershey, Penn.; and Timothy R. Pauketat from the Department of Anthropology at the University of Illinois at Urbana-Champaign, Urbana.

The release of evidence for black drink consumption is the second major announcement this summer using findings from Millsaps College's Keck Center. The center announced that scientists had detected evidence of the presence of cacao in ancient ceramic pottery recovered from a Maya archaeological site in Yucatán, Mexico, making it the earliest documented evidence of the use of cacao in the Northern Maya Lowlands.


Millsaps College's Keck Center is the only archaeometric laboratory in the United States devoted exclusively to undergraduate research and study. Millsaps students work in the field and the laboratory identifying everything from early chocolate usage among the Maya to recipes for ancient wine and food from Albania and Greece. Students have helped make breakthrough discoveries on the use of metals in Europe and the development of early trade in Yucatán.


The Keck Center allows Millsaps students to examine the past by studying the chemistry of and the ancient residues on artifacts. The $1.2 million laboratory consists of a suite of archaeometric instruments, allowing students to perform research in ICP-, GC- and LC- Mass Spectrometry, laser ablation and Portable X-Ray Florescence spectrometry.

The black drink or white drink was a type of ritual beverage brewed by Native Americans in the Southeastern United States such as theMuscogee ássi. It is thought to have been prepared from the roasted leaves and stems of Ilex vomitoria (commonly known as Yaupon Holly) native to the Atlantic and Gulf Coasts, though it may also have been a concoction of other roots and herbs.[1] Yaupon beverages, which have caffeine, were often used as a substitute for coffee and tea by colonists under the name cassine or cassina, the latter term derived from the Timucua name for I. vomitoria.[2] The black drink may also have had emetic properties.

Prior to the 19th century, the black drink was consumed during the daily deliberations of the village councils and at all other important council meetings. Caddo, Muscogee, Cherokee, Choctaw and others indigenous peoples of the Southeastern Woodlands drank it for purification. The black drink was prepared by special village officials and served in large communal cups, frequently made of whelk shell. Councils were served in order of the precedence of individuals present, starting with important visitors. They consumed large quantities and often followed by ritual vomiting.