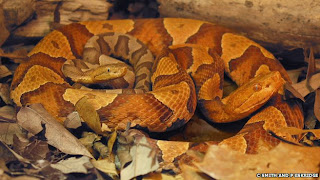 It may not be possible with mammals, but elsewhere it now appears to be common enough to be effective when a population does miss its breeding season through external intervention. And in spite of all said, a rare mammalian virgin birth should not be ruled out.

It appears to be also quite common in the species studied which is why it is seen and now better understood. Just as clearly, it is not so common outside what has been observed. Thus determining the biochemical pathway appears important. There may be a simple trigger that can be applied on demand.

We will want to have those triggers when we begin cloning DNA for replicating extinct species. A single mammoth is a tragedy while a female mammoth able to produce is a great plan that provides additional time to clone up additional members. We also will not be stymied if we have only one usable sample to work from.

A form of virgin birth has been found in wild vertebrates for the first time.

Researchers in the US caught pregnant females from two snake species and genetically analysed the litters.

That proved the North American pit vipers reproduced without a male, a phenomenon called facultative parthenogenesis that has previously been found only in captive species.

Scientists say the findings could change our understanding of animal reproduction and vertebrate evolution.

It was thought to be extremely rare for a normally sexual species to reproduce asexually.

First identified in domestic chickens, such "virgin births" have been reported in recent years in a few snake, shark, lizard and bird species.

Crucially though, all such virgin births have occurred in captivity, to females kept away from males.
Virgin births in vertebrates in general have been viewed as "evolutionary novelties", said Warren Booth, from the University of Tulsa, Oklahoma, US.

Professor Booth is lead author of a paper published in the Royal Society's Biological Letters that challenges this label.

He and his collaborators investigated virgin births in wild populations of two geographically separated and long-studied species of snake.

They captured pregnant copperhead and cottonmouth female pit-vipers from the field, where males were present.

The snakes gave birth, allowing the scientists to study the physical and genetic characteristics of the litters.

Of the 22 copperheads, the scientists found one female that must have had a virgin birth.

Another single virgin birth occurred within the 37 cottonmouth litters.

"I think the frequency is what really shocked us," said Prof Booth.

"That's between 2.5 and 5% of litters produced in these populations may be resulting from parthenogenesis.

"That's quite remarkable for something that has been considered an evolutionary novelty," he said.

Sex or no sex

A virgin birth, or parthenogenesis, is when an egg grows and develops without being fertilised by sperm.

It results in offspring that only have their mother's genetic material; no fatherly contribution is required.

This is not uncommon in invertebrates such as aphids, bees and ants.

It also happens in a few all-female species of lizard; geckos and whiptails for example. But here it occurs across a generation; all females reproduce asexually via a process called obligate parthenogenesis.

But asexual reproduction by a normally sexual vertebrate species is still rare, having been reported in under 0.1% of species.

It was only in the mid-1990s that virgin births began to be documented in captive snakes, followed by a captive giant lizard in 2006 and a captive shark in 2007.

To date this now includes around 10 species of snakes including a couple of boas, and a python, four species of shark, and several monitor lizards, including the endangered Komodo dragon.

Recently the zebra finch and Chinese painted quail were added to the list. All were kept in isolation in unnatural conditions and away from any males.

So to find asexual reproduction in two species of snake in the wild on their first attempt was "astounding", according to Prof Booth and his collaborators.

Virgin births should no longer be viewed as "some rare curiosity outside the mainstream of evolution," he said.

It remains unclear whether the female snakes actively select to reproduce this way, or whether the virgin births are triggered by some other factor, such as a virus or bacterial infection.

"Any answer is pure speculation at this point," says Prof Booth.

In captivity, two sharks, and three snakes, have been shown to have had multiple virgin births, producing more than one litter via facultative parthenogenesis.

As yet, it also remains unclear whether the offspring of these wild virgin births can themselves go on to have normal, or virgin births of their own.

In captive snakes studied so far, offspring have so far not been proved viable, that is capable of surviving and reproducing.

However, earlier this year Prof Booth and colleagues reported that a checkered gartersnake that has had consecutive virgin births, appears to have produced viable male offspring.

Parthenogenicly born copperheads and cottonmouths are also currently being raised and "in the next two to three years we will know if they are indeed viable," said Prof Booth.

"If they cannot survive and reproduce, then this is a reproductive dead-end.

"However, if they are healthy and can reproduce, that opens an entirely new avenue for research," he said.

Being able to switch from sexual to asexual reproduction could be advantageous; in the absence of males a female could still give birth and start a new, albeit inbred, population.

Her genes could still be passed on via her fertile male offspring.

Scientists believe that facultative parthenogenesis is more common in some lineages such as reptiles and sharks.

However it is unlikely that similar virgin births will be found among placental mammals, which include all the mammals aside from the platypus and echidnas.

That is because mammals require a process called genomic imprinting to reproduce, where a set of genes from one parent dominates over the other. The interaction between the two sets of parental genes is required for embryos to develop normally.