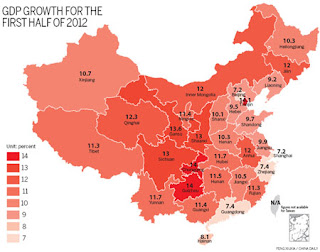 This is actually reassuring. The coastal regions have effectively maxed themselves out and are simply maturing into ultimately a steady slower growth. The rest are still into a max growth scenario and generally rising incomes will drive this in a way that exports never could.

At this time, the export sector must naturally diminish in general importance in China although its effect globally will continue to be felt. In fact though it is reasonable to see China joining the west as a natural driver of economic development throughout the globe. Thus even Africa is clearly been stimulated into motion and mounting pressure in India will soon cure the remnants of the regulatory Raj.

It is easy to take note of corruption, but in China, that corruption has largely been a shortcut to development while the opposite has been true generally elsewhere. As the economy truly matures, popular will will asset itself and the worst abuses will be contained, but for the nonce, stand back already.

The example provided by China is a sharp lesson in economics to everyone else and noone can avoid that lesson forever. 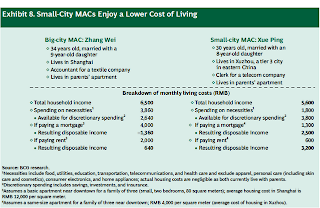 While much of the international focus is on China's growth slowing down and the risk of a so-called hard landing, large swathes of the country, particularly in central and western areas, are enjoying unprecedented rates of growth.


This two-speed China is beginning to whet the appetite of the large multinationals as well as businesses from the rest of China that are finding that doing business in the mature coastal areas of Shanghai and Guangdong is becoming increasingly difficult.

According to an Economist Intelligence Unit survey, which incorporates data from the National Bureau of Statistics, growth in Beijing last year was just 8.1 percent, Shanghai 8.2 percent and in Guangzhou, a key center for China's exports, although holding up at 11 percent, was down from the 2010 level of 13.2 percent.


By contrast, the inner and western regions are motoring ahead. Growth in Chongqing, the huge metropolis in the west of China, was 16.4 percent, Sichuan 15 percent, Yunnan province in Southwest China 13.7 percent and Changsha, the capital of the central province of Hunan, 14.5 percent.


Liu Qian, deputy director of the China Forecasting Service at the Economist Intelligence Unit in Beijing, says the faster growth in part reflects that many companies are relocating there.


"With wages increasing in many of the coastal provinces, manufacturing companies have been looking for alternative locations and have been particularly attracted to some of the inland provinces. Not only are wages cheaper there but also many of them have pretty good universities," she says.


"An additional advantage for provinces like Hunan, Henan and Anhui, for example, is that they are not very far away from the coast. So with improving infrastructure, it is relatively easier to ship goods out."


It forecasts the number of middle class and affluent consumers in China that will come from third-tier cities, which predominate in these areas, will more than treble from 27 million households in 2010 to 92 million in 2020.

Waldemar Jap, partner and managing director of BCG, based in Hong Kong, says there is a tendency to see people from inner China as peasants with little spending power.


"Many of them are, in fact, relatively rich since these areas have relatively high per capita incomes. It has to be remembered that many of these inner provinces are not that far from the coastal provinces," he says.


"What we are telling our clients is that they are going to be a battlefield and a very significant growth driver over the next five years. In some ways they hold the key to the billion consumer market that everyone has been talking about for years."


A major question is for how long the marked disparity in growth between the coastal and developing inland regions will continue.