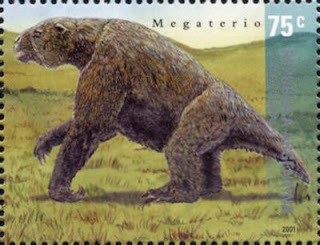 My one wish in terms of this report from thirty plus years ago is that the investigators had tried harder to get more detail recalled. Most likely the creature emerged, his brain registered that this was a real life treat an d his legs took charge of the rest. I have experienced that myself and can assure you that you get the initial image and that is it.

However, I do not think that Bigfoot solicits this type of response and a Bigfoot would possibly have been recognized. On top of that the level of travel noise is exceptional. That has never been observed with a Sasquatch in the past as it appears to be generally stealthy. Besides this creature was even availing itself of a cleared pathway.

Much more important is the dead meat smell. We have already learned to associate that with the giant sloth and its trick of caching game in order to harvest maggots a few days later. I have seen little to suggest that the Sasquatch or Bigfoot does something similar although I would not entirely discount the possibility.

Primates are well enough adapted to eating and consuming meat, that the strategy seems unlikely whereas a creature evolved from insect and larvae eating combined with a slow plant digestion looks way more likely.

In the mean time we are slowly adding good sloth reports to our inventory. It is noteworthy that only one observer actually recognized the creature for what it is. All others have generally not. More commonly they do get the long claws which is missing in this report. Those claws also are on the legs and walking upright would also be somewhat unstable even if convenient. Thus the noisy passage through the woods adds additional plausibility to the Sloth conjecture.

A Monster on the Mountain

http://www.mania.com/lair-beasts-monster-mountain_article_133972.html
Situated on the southern tip of the vast and mountainous Cascade Range – which encompasses parts of British Columbia, California, Washington State, and Oregon - Mount Shasta is a huge, all-dominating peak that, at nearly fifteen thousand feet, is the fifth tallest mountain in the Golden State,and one that has been home to human civilization, in varying degrees, since around 5,000 B.C. It’s also a mountain steeped in matters very mysterious – including Bigfoot.

Its wild antics hit the local media on September 9, 1976, only a few days after the foul-smelling thing was seen near Cascade Gulch, which is located on the lower slopes of the legendary mount. The man that had the misfortune to cross paths with the monster was a logger from the town of Salmon: Virgil Larson.

In a subsequent interview with Sergeant Walt Bullington of the local police, the then forty-seven year old Larson explained how, at around 8.30 a.m. only a few days earlier, he and a colleague, Pat Conway – both of the Columbia Helicopter Company - carefully negotiated the treacherous slope to their place of walk, having left their truck at a parking area adjacent to the road.

It was while they were getting their breath back at the base of the hilly area in question – but now separated from each other by a few hundred feet, due to the rigors of the descent - that something occurred to Larson he most certainly was not anticipating in the slightest.

After a couple of minutes of taking a rest, Larsen’s attention turned to the sound of loud, thumping footsteps coming down the hill. For a few moments he could see no-one, but quite naturally assumed it was yet another colleague from the U.S. Forest Service.

It was not – that is, unless, the service had some truly strange characters in its employ. Finally, at a distance of around fifty feet, Larsen could now see what, at first, looked like a darkly dressed man descending along a crude pathway through the trees that the logging company had created.

With thick bushes and trees dominating the entire scene, however, Larsen could only get the barest glimpses of the figure as it made its lumbering way down the hill; so, he called out, by way of wishing the character a good day. Bigfoot, evidently, is hardly one enamored by early morning, genial chatter.

The dark form suddenly stopped, briefly turned its head in Larson’s direction, then began walking again, at a noticeably increased speed – all without any form of reply to Larsen’s greeting. Then, when the thing was barely fifteen feet away and no longer largely obliterated from view by the dense foliage, Larsen was at last able see the enigmatic visitor in its fullest form.

It was at this point that Larsen’s mind became flooded by fear and panic: there was no man in his midst, after all. What was in his full midst for a second or several was a bulky, black-hair-covered monstrosity that stunk like rotting meat and stood at around a towering seven and a half feet.

Larsen got the disturbing impression that the creature was possibly sizing him up – whether as foe, food or even both – and didn’t wait around to get a better look and very wisely fled the area at high speed. Having raced to where Pat Conway was also taking a break before beginning the day’s activities, Larsen breathlessly related to his amazed partner what he had just seen.

Thirty minutes later and armed with a couple of thick tree limbs for protection, the pair tentatively returned to the area and checked out the site. The creature was gone, but the terrible odor was still very much hanging around, while strange and somewhat indistinct tracks dominated the forest floor. It was now time, both men concluded, to bring in the sheriff.

Three Forest Service employees, Don Wopschal, Bob Gray and Rex Lebow, soon arrived with the previously referred to Sergeant Bullington. Interestingly, Larsen’s encounter was taken most seriously by officialdom, which surely begs the inevitable and thought-provoking question of: was the seriousness prompted by other, earlier Bigfoot encounters in the area that had caught the attention of concerned authorities?

Whatever the answer to that potentially important question, the positive response by the sheriff’s office did not stop the authorities from ultimately trying to downplay the affair, however. A somewhat condescending suggestion was made that perhaps Larsen had been frightened by nothing stranger than a long-haired environmentalist that had a problem with loggers chopping down the old, mighty trees of Mount Shasta.

Neither Larsen nor his wife was in any fashion satisfied by such a bizarre and unlikely theory. Larsen remained in a state of emotional turmoil for a number of days, while his wife stated that her husband was a man with three decades of experience working in the woods and one who had been frightened witless by his encounter. Mount Shasta had just become even weirder, if such a thing was even conceivably possible.