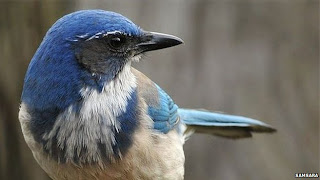 It should not surprise us to discover that emotions and instinctual responses are shared by other species rather generally.  Obvious intelligence certainly matters, but the choice of famously clever birds obviates any risk there.

This behavior has been well observed in animals in close proximately to ourselves.

In the event it is all derived from eons of selective choices that promoted species success of which we are the inheritors.

Some birds, it seems, hold funerals for their dead.

When western scrub jays encounter a dead bird, they call out to one another and stop foraging.

The jays then often fly down to the dead body and gather around it, scientists have discovered.

The behaviour may have evolved to warn other birds of nearby danger, report researchers in , who have published the findings in the journal Animal Behaviour.

The revelation comes from a study by Teresa Iglesias and colleagues at the of , .

They conducted experiments, placing a series of objects into residential back yards and observing how western scrub jays in the area reacted.

The jays reacted indifferently to the wooden objects.

But when they spied a dead bird, they started making alarm calls, warning others long distances away.

The jays then gathered around the dead body, forming large cacophonous aggregations. The calls they made, known as "zeeps", "scolds" and "zeep-scolds", encouraged new jays to attend to the dead.

The jays also stopped foraging for food, a change in behaviour that lasted for over a day.
When the birds were fooled into thinking a predator had arrived, by being exposed to a mounted owl, they also gathered together and made a series of alarm calls.

They also swooped down at the supposed predator, to scare it off. But the jays never swooped at the body of a dead bird.

The birds also occasionally mobbed the stuffed jays; a behaviour they are known to do in the wild when they attack competitors or sick birds.

The fact that the jays didn't react to the wooden objects shows that it is not the novelty of a dead bird appearing that triggers the reaction.

The results show that "without witnessing the struggle and manner of death", the researchers write, the jays see the presence of a dead bird as information to be publicly shared, just as they do the presence of a predator.

Spreading the message that a dead bird is in the area helps safeguard other birds, alerting them to danger, and lowering their risk from whatever killed the original bird in the first place, the researchers say.

Other animals are known to take notice of their dead.

Giraffes and elephants, for example, have been recorded loitering around the body of a recently deceased close relative, raising the idea that animals have a mental concept of death, and may even mourn those that have passed.
Posted by arclein at 12:00 AM