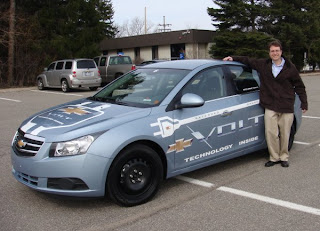 The EV has faced one basic problem from the very beginning and that is an effective battery solution. That means two things. Power delivery with swift recharge ability for a 600 mile range design base at an attractive cost. We are perhaps half way there on the first and still quite out on the issue of cost.

Until those benchmarks are met, no design genius in the world can win. We are certainly much closer and importantly, the auto industry has learned how to build compatible vehicles, so when batterys are available, the roll out will be immediate.

So while much progress has been made we are still waiting to meet the true kick off benchmark. We have a while to wait.


GM’s vaunted Volt is on the road to nowhere fast

By Editorial Board, Published: September10

http://www.washingtonpost.com/opinions/gms-volt-is-on-the-road-to-nowhere/2012/09/12/29cd8216-fd0d-11e1-a31e-804fccb658f9_story.html
AS A CANDIDATE for president in 2008, Barack Obama set a goal of getting 1 million all-electric and plug-in hybrid vehicles on the road by 2015. In February 2011, the Obama administration’s Energy Department issued an analysis purporting to show that, with the help of subsidies and tax credits, “the goal is achievable.” This was a paltry claim in the first place, since 1 million cars amount to less than 1 percent of the total U.S. fleet. Yet it is increasingly clear that, despite the commitment of many millions of taxpayer dollars, the United States will not hit Mr. Obama’s target by 2015. A recent CBS News analysis suggested that we’ll be lucky to get a third of the way there.

The Energy Department study assumed that General Motors would produce 120,000 plug-in hybrid Volts in 2012. GM never came close to that and recently suspended Volt production at its Hamtramck, Mich., plant, scene of a presidential photo-op. So far, GM has sold a little more than 21,000 Volts, even with the help of a $7,500 tax credit, recent dealer discounting and U.S. government purchases. When you factor in the $1.2 billion cost of developing the Volt, GM loses tens of thousands of dollars on each model.

Some such losses are normal in the early phases of a product’s life cycle. Perhaps the knowledge and technological advances GM has reaped from developing the Volt will help the company over the long term. But this is cold comfort for the taxpayers who still own more than a quarter of the firm.

The Energy Department predicted that Nissan, recipient of a $1.5 billion government-guaranteed loan, would build 25,000 of its all-electric Leaf this year; that car has sold only 14,000 units in the United States.

As these companies flail, they are taking the much-ballyhooed U.S. advanced-battery industry down with them. A Chinese company had to buy out distressed A123, to which the Energy Department has committed $263 million in production aid and research money. Ener1, which ran through $55 million of a $118 million federal grant before going bankrupt, sold out to a Russian tycoon.

No matter how you slice it, the American taxpayer has gotten precious little for the administration’s investment in battery-powered vehicles, in terms of permanent jobs or lower carbon dioxide emissions. There is no market, or not much of one, for vehicles that are less convenient and cost thousands of dollars more than similar-sized gas-powered alternatives — but do not save enough fuel to compensate. The basic theory of the Obama push for electric vehicles — if you build them, customers will come — was a myth. And an expensive one, at that.

By 2015, you could own an electric Batmobile

One night a few weeks ago, while on a Honda junket in Santa Barbara, I had dinner with a couple of Japanese green-car technology engineers. I realize that, in terms of cool cred, that statement ranks far below “I just got back from Burning Man” or “have you seen my TED talk?,” but I was still excited. I guess I’m a green-car nerd now.

After a weird moment where one of the engineers compared my beard to a bonsai tree, we began to discuss shop. I’ll admit that I didn’t understand everything they said to me, but here’s the gist: Honda puts its best engineers at work on developing alternative-fuel cars. And they’re not the only ones.

In the past year, as part of my strange new career as a car writer, I’ve driven everything from the most exalted Rolls-Royce to the lowly ScionIQ, and what pisses me off most about the cars I drive is their gas mileage. Why does that Infiniti only get 19 mpg, or that Mustang convertible 17 mpg? What’s with all these big, stupid crossover vehicles that cost 80 bucks a week to fill? Frankly, it’s pathetic.

I’m hoping that manufacturers might also be feeling the shame, and also pressure from their governments. Eventually, your average consumers might even start thinking alternative-fuel cars are cool, too.  Look at the hoopla surrounding Tesla Motors’ recently released Model S “supercar.” It goes 3,000 miles per hour, approximately, and a recent Motor Trend test-drive in the desert showed it has an electric range of more than 250 miles. A change is coming. You should see these electric cars that BMW is putting out next year, the i3 and i8. They look like superhero cars from the future. I want one so bad.

While it would be wonderful if the entire world would just travel around on magnetized super-trains, the fact is, many people have to drive every day. Some of them have to drive quite far. So the way the car companies behave in the next 20 years will help determine the fate of our planet. I’m beginning to see encouraging signs.

For years, Honda’s been leasing out a hydrogen-fueled car for about $600 a month to discriminating California consumers. In a more mainstream gambit, the Honda Accord, a boring college-town sedan for decades, is about to appear ina plug-in hybrid version. The Honda FIT EV, though poorly available, gets more than 100 miles to a charge, and everyone I’ve talked to who’s driven it thinks it’s fantastic.

And Honda has to double-down on electric cars so it can catch up to Toyota. The Prius is one of America’s most popular cars, and Toyota’s adding more EVs to its fleet constantly, including a new plug-in Prius that gets a modest 12-15 miles per electrical charge. Toyota just introduced a hybrid Camry, which I drove and thought was pretty good, and an all-electric RAV4, which blew my mind when I drove it in July. I had it for five hours solid and there was still plenty of range left when I was done zipping it around Newport Beach.

Of course, Japanese and Korean automakers were working on this stuff back when we were chatting on AOL and enjoying the first season of Survivor. But now there’s also  a little-reported alliance among General Motors, Chrysler, Ford, BMW, Mercedes, and the Volkswagen group. Their engineers are jointly developing alternative fuel technologies, which they must because Europe is adopting very rigid fuel standards in 2017. The U.S. will follow by 2025, assuming that it continues to elect federal executives that believe in the reality of global warming. The new U.S. CAFE standards (which unfortunately do not ban café-based spoken word nights — an initiative I also support) will bring the average mpg  of cars up over 54, though it will probably be closer to 40 once all the evil oil lobbies munch their chunks off that. Regardless, it’s a big change from the current situation.

And now a confession: I try to enjoy combustion cars for what they are, especially if they go vroom really fast. People love them for a reason. They can be fast, fun, and often quite useful. But they have to change. I feel like, and I may be overly hopeful here, that I’m enjoying the last moments of a technology before it’s swept away by historical reality.

Of course, I also might be totally fooling myself. That awesome RAV4 I drove? Toyota’s only going to sell or lease 2,500 of them, and all in California. Same with Honda’s Fit EV. The Prius continues its unstoppable march toward segment dominance, but other alternative-fuel cars are struggling. The Chevy Volt, a fantastic car by any standard, is offering $259-a-month leases on cars that cost $40,000 last year. I haven’t driven the new Ford C-Max hybrid series, but everyone seems to love it a lot. Enthusiasm aside, the C-Max still warrants the usual “will people buy it?” caveat, an addendum phrase that seems to haunt the world of alternative-fuel cars. Consumers aren’t yet persuaded, except in rare West Coast pockets, and the infrastructure doesn’t yet exist to support alternative-energy cars en masse.

To those of you who still might be saying “the technology isn’t good enough yet,” I would say: You’re wrong. It’s definitely good enough. And to those who are reluctant because of price, fair enough. But the electric Model T, a car that will change the way the world drives, is coming. I don’t know what that model will be yet, or from what factory but regardless, this automotive Messiah will rise.

That said, even EV geniuses get the need for speed from time to time — and for that, burning carbon is still optimal. After a long dinner and much wine with my new engineer friends from Honda, one of them leaned in and said, “I have worked on every kind of fuel technology for cars,” he said. “And I am convinced that combustion engines work best.”

This surprised me, but he assured me that it was true. Though the world needs alternative-energy cars for its future survival, he said, racecars need to continue to run on gasoline. I agreed, for now. Watching electric cars race isn’t much fun — yet. That Model S goes pretty damn fast.

Neal Pollack is the author of Jewball and the best-selling memoirAlternadad. He has contributed to The New York Times, Wired, Slate, Yoga Journal, and Vanity Fair, among many other publications.

When looking at Who Killed the Electric Car some years ago, I was surprised to note Toyota had marketed an electrified hybrid Rav 4. It was pulled because of $300 million fines in battery technology patents. We have the know how to break the battery problem - and are being prevented from implementing it.
https://en.wikipedia.org/wiki/Patent_encumbrance_of_large_automotive_NiMH_batteries