How to tackle U.S. debt: Just do it 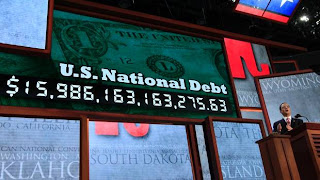 There are many tweaks and fixes available to generally improve overall economic performance including implementing a national capitalization plan around some obvious medium term objective like completely replacing infrastructure. Yet there is this.

Getting your house in order is a simple as just doing it.

That happens and massive investment will flood the USA and swiftly end this stagnation. It is all sitting there waiting to believe.

How to tackle U.S. debt: Just do it

http://www.theglobeandmail.com/commentary/how-to-tackle-us-debt-just-do-it/article4549984/
Canadians can be forgiven for feeling both pleased and a little perplexed over the raging debate in the United States on how to fix its fiscal mess. On the one hand, it is not often that Canadian accomplishments get mentioned in U.S. election campaigns, as Republican vice-presidential nominee Paul Ryan did when he praised our fiscal reforms. On the other hand, many Canadians don’t quite understand what all the Sturm und Drang south of the border is about. Fiscally speaking, we’ve been there, done that.

Canada faced an even larger fiscal crisis in the mid-1990s than America does today, and our achievement dwarfs anything being proposed in Washington. By acting decisively, Canada resolved its crisis quickly and with surprisingly little pain. Since the memory of this momentous achievement is fading, or is unknown to the younger generation, it is worth recalling how it unfolded.

In the mid-1990s, the Canadian federal government had been in budget deficit for two decades. A third of all federal revenue was being frittered away on interest on the debt. A Wall Street Journal editorial from Jan. 12, 1995, declared that the country “has now become an honorary member of the Third World in the unmanageability of its debt problem … it has lost its triple-A credit rating and can’t assume that lenders will be willing to refinance its growing debt.”

Deliverance came the following month when the centre-left Liberal government tabled its historic budget. This document was a defining moment in Canada’s fiscal history.

More astonishing than the bold plans for a massive rollback was the fact that Ottawa actually did what the document said. Total spending fell by more than 7 per cent over two years, while program spending (excluding interest) fell by almost 10 per cent. As a share of the economy, federal spending fell from almost 22 per cent to 19 per cent during the same period. By January, 1998, federal employment was down 51,000 – about 14 per cent. Ottawa ran 11 consecutive budget surpluses beginning in 1997/98. With the federal government paying down its debt and the economy expanding, total public debt plummeted over the following decade.

To take the full measure of Canada’s achievement, compare it with the bipartisan Bowles-Simpson commission and so-called Ryan plans to tackle the deficit. Compared to the status quo, Bowles-Simpson never cuts absolute federal spending. The Ryan plan does propose actual spending cuts, but they are not nearly as vigorous as Canada’s. By the fourth year of reform, total Canadian federal spending was still slightly less than it had been the year prior to reform. In contrast, in year four, the Ryan plan projects spending to be almost 2 per cent higher than its year-zero baseline, while Bowles-Simpson projects spending to be more than 10 per cent higher.

By the 10th year of reform, Bowles-Simpson projects spending to stabilize at about 22 per cent of GDP, while the Ryan plan aspires to reduce federal spending to just under 20 per cent.

Canada’s federal spending actually fell from 21.5 per cent of GDP in 1994 to 15.2 per cent in 2004. The allegedly draconian Ryan plan calls for a medium-term level of federal spending that is almost a third higher than what the Canadian government achieved.

Finally, we come to the deficit and debt. In a mere two years, the Canadian government transformed a $32-billion deficit (4 per cent of GDP) into a surplus of $2.5-billion. In contrast, neither Bowles-Simpson nor House budget resolutions even attempt to balance the budget in the medium term; they simply stabilize the federal deficit at about 1 per cent of GDP. The Ryan plan explicitly calls for more red ink for the next 27 years.

These inadequate plans are all premised on the notion that reining in out-of-control public spending is painful and politically dangerous and must be approached defensively and fearfully. Canada’s experience was quite different. Once politicians explained why reform was indispensable, it was cheered on by voters. Reforming governments, of whatever stripe, were consistently re-elected. Most importantly, in the decade after reform, Canada outperformed all other G7 nations in economic growth, investment and job creation, while the number of low-income Canadians fell by two-fifths and universal health care remained in place.

The U.S. faces a serious fiscal crisis, as all sides are beginning to recognize. The rather timid response of the two political parties is based on an underestimation of voter appetite for fiscal responsibility and an overestimation of the pain required to fix the problem. As Canada showed in the 1990s, bold and skillful politicians can take a plan for fiscal austerity and turn it into a recipe for political and economic success. All America has to do now is find some bold and skillful politicians. Should be easy, right?

Brian Lee Crowley is managing director of the Macdonald-Laurier Institute, a public policy think tank in Ottawa. Robert P. Murphy is principal at Consulting by RPM. They are the authors of Northern Light: Lessons for America from Canada’s Fiscal Fix.