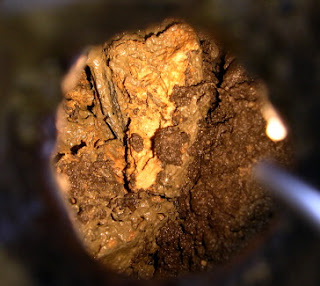 Even better has this naturally acted to encapsulate DNA samples generally for far longer periods of time? It may not be the La Brea tar pit but the results may be comparable for the right lakes and bogs. In particular I would take a long look at closed of natural lakes with no circulation. In particular we have the Lake in Africa that is saturated with CO2 and a number of deep mountain lakes in many places that constrain circulation to the surface waters.

However something has the displace the natural oxygen in the water. That is likely the methane in the bogs.

What this does provide us with a good reason to conduct deep diving operations and contained deep lake bed sampling.

Archeologists working in York in the United Kingdom discovered a remarkably well-preserved human brain that was over 2,500 years old.

BY MAKINI BRICE | AUG 17, 2012 11:54
http://www.medicaldaily.com/articles/11577/20120817/brain-archeology-well-preserved-heslington-england.htm
Archeologists working in York in the United Kingdom discovered a remarkably well-preserved human brain that was over 2,500 years old.

Found by UK researchers, the brain was found in a decapitated skull aged 2,684 years. The brain is the oldest found brain in Europe or Asia, and is thought to be the best-preserved in the world.

Follow us:
The finding is particularly astonishing because, even when left on a counter in a chilled mortuary facility, brains tend to degrade quickly into liquid. This one, however, had the consistency of tofu, and had none of the distinctive smell so often associated with dead corpses.

Though it is difficult to ascertain cause of death after so many years, the damage to the neck vertebrae was consistent with a hanging. Sonia O'Connor and her colleagues believe that the person was hanged, and then the skull was decapitated.

Interestingly, the way that the body died worked against the preservation of the brain. The separation of the head from the rest of its body would have opened it up to immediate infection from bacteria.

But, because the brain had been preserved in a water-logged pit free of oxygen, either having been placed there or having fallen in, the brain was kept fresh. Other body parts in the same environment may not have been so well-preserved, but due to the brain's unique properties, it was kept fresh.

Unfortunately, while the brain's appearance has been kept fresh, the cells and tissues have long died, though that is of course expected under the circumstances.

The brain belonged to a person, probably a man, in his thirties. Though the rest of his body was not located at the site, the head of a deer was.

The skull was found in Heslington, Yorkshire, a suburban village in the northeast portion of England.
The study was published in the Journal of Archeological Science.