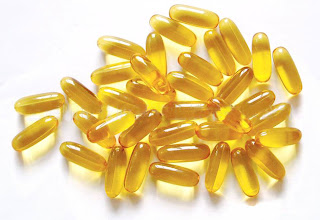 The bottom line is that having fish oil capsules with your steak is nonsense. Eating more fish really means eating much less of the damaging meats and that is the source of the benefit. The best advice is to fill up your freezer with fish and eat any other type of meat elsewhere so that it becomes an occasional luxury.

In the meantime, fish oil on its own is no help at all and need not be bothered with. I had not been convinced myself and had not used them. The manufacturers need to return to the drawing board with this one.

At least we are seeing science steadily at work now in the supplements business. This weeds out a lot of perfectly good ideas that simply do not fly. Welcome to science. Not all research is paid for by drug companies.

http://www.vancouversun.com/health/heart+health+fish+pills+answer+study/7229536/story.html
Omega-3 fatty acids, found in oily fish such as sardines and salmon and once touted as a way of staving off heart disease and stroke, don’t help after all, according to a Greek study.

Based on a review and analysis of previous clinical trials including more than 68,000 participants, Greek researchers whose report appeared in the Journal of the American Medical Association said the fatty acids have no impact on overall death rates, deaths from heart disease, or strokes and heart attacks.

This was true whether they were obtained from supplements such as pills, or from fish in the diet, said the researchers, led by Mosef Elisef at the University Hospital of Ioannina.

"Overall, omega-3...supplementation was not associated with a lower risk of all-cause mortality, cardiac death, sudden death, myocardial infarction, or stroke based on relative and absolute measures of association,” Elisef and his team wrote.

A decade ago, medical evidence suggested that boosting omega-3s, including the acids known as EPA and DHA, with food or supplements had a strong protective effect even though the mechanism wasn’t understood.

Scientists cited improvements in levels of triglycerides - a type of fat in the blood - as well as blood pressure levels and heart rhythm disturbances.

But since then, the picture has grown clouded. Earlier this year, a group of Korean researchers found that omega-3 supplements had no effect on heart disease or death based on 20,000 participants in previous trials.

The current study pooled results of 18 clinical trials that assigned participants randomly to take either omega-3 supplements, or not. It also includes two trials in which people got dietary counseling to increase their consumption of omega-3 rich foods.

Because the trials in the Greek analysis went as far back as 1989, researchers also considered whether growing use of statins and other medications could explain why later studies failed to support the earlier findings. But Elisef and his team said that wasn’t the case.

Because people who eat a lot of fish have been found to have less heart disease, researchers figured that perhaps putting the supposed “active ingredients” in a pill could provide similar benefits, said Alice Lichtenstein, director of the Cardiovascular Nutrition Laboratory at Tufts University in Boston.

“What we have learned over the years is you can’t think about individual nutrients in isolation,” she added.

People who eat fish often may be replacing things like steak, hamburgers or quiche, making for a healthier diet.

Instead of supplements, Lichtenstein recommended eating fish at least twice a week, having a diet rich in whole grains and vegetables, getting lots of physical activity, and not smoking.


Read more:
http://www.vancouversun.com/health/heart+health+fish+pills+answer+study/7229536/story.html#ixzz26Gz55qff
Posted by arclein at 12:00 AM

Thanx for Sharing such a hugefull information and lots of benifits of Fish Oil. ya u r ryt, Fish Oil is the one of the best nutrician , it has been show to provide a number of health benifits, and recomended by many health autorities as a part of balanced diet. Fish oil contains omega-3 fatty acids, specifically docosahexaenoic acid (DHA) and eicosapentaenoic acid (EPA).One of the health benefits linked to Fish Oil is a low risk of heart attack. very healpfull for blood circulations.

Thanx for ur post nd giving us a hugefull information, plzz tell me wht is the main benifit of FO & WP .. ???