Why Obame Will Be a One Term President With Tex Enemark 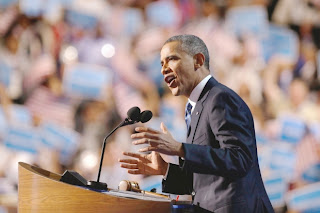 This article pretty well expresses my own thoughts on the matter.  The margin of victory in 2008 was way too slight and the perfect storm of special circumstances, Obama’s impenetrable bubble and McCain’s weakness as a candidate provided only a slight margin.  None of this can be properly recaptured today.

Obama today must totally reenergize his support to just hold his own while Romney only needs to turn up the heat and maybe not even that.

Of course, lightening could strike and something unforeseen will make it work.  It is just that these elections consist getting out the committed voters representing over ninety percent in reality and discouraging the weak ones on the other side.  Right now Obama is showing signs of peaking too early in any case.

In the meantime, Romney is showing all signs of holding steady while pressing the attack and not going off message regardless of all the free advice running around.

My sense right now is that flubs aside and general silliness that any single event could derail Obama’s Campaign.  It may well come on the Foreign policy front if it has not already happened with the Al Qaeda assassination of the Libyan ambassador.  That was inexcusable by the way.  If there was ever a post needing a marine security team it is that one.

Why Obama will be a one-term president

As much as I do not like it, Barack Obama will be a one-term president. Why? Because his 2008 election win took so much effort, resulted from such unusual circumstances at a unique time, and cannot be duplicated.

In 2008, Obama was running against the record of an unpopular president who doubled the national debt, started the war, abused civil rights and led the country into the worst recession in 70 years. His policies divided the American people as never before and abetted religious and social divisions. He undermined science, knowledge, and any attempt at national tolerance about anything. The techniques he used to capture the presidency — twice — have put a stain of dishonour on his name.

Obama was also running against an uninspiring septuagenarian senator who chose an ignoramus as a running mate, and who became the campaign’s laughing stock. George Bush at least knew he could not see Mexico City from Midland, .

Given all that, Obama should have won easily. He did not. It took extraordinary, enormous, unprecedented effort to identify, organize, and register millions of citizens who had never voted before and get them to the polls to cast that ballot. It was an effort that resulted in the highest percentage voter turnout in 40 years. And Obama was able to raise and spend much more money than McCain.

But, in the course of the campaign, to extract both the funds and the votes, Obama raised expectations so high for so many that, even in good times, they could not be met.

He has not been able to make real the dreams and aspirations of so many of his supporters, largely because Republicans have gridlocked almost everything in Congress, slowing economic recovery, and obstructed dealing with the national debt. Obama can rightfully complain, but politics is an unforgiving business. This time, there will not be that degree of enthusiasm, that outpouring of emotion, money, and organizational effort.
And the , despite the temporary revolution that resulted in Obama’s election, is at heart a profoundly conservative if not reactionary country.

Why is Obama doomed?

Three reasons: First, much of the idealism and freshness of the Obama image has been lost, and too many of his 2008 supporters have lost heart, and will just not vote. Others have had their Obama-fostered idealism rubbed off.

Second, the Republicans are four years away from the policies, performance, and problems of George W. Bush. And vice-presidential candidate Ryan is a knowledgeable, competent, articulate, serious politician, in stark contrast to Palin.

But most important, in 2012, is money, which every practical politician anywhere will tell you, “is the mothers’ milk of politics.” In 2008, McCain did not have enough. This year, Mitt Romney will have too much, certainly much more than Obama. The Republicans will almost be embarrassed by the tsunami of cash flooding into their election coffers, and, since court decisions in 2010, there is now no limit to how much money can be spent by third-party advertisers, specifically Political Action Committees, or Super PACS, of which there are now about 220. Of even greater concern is that billionaires are giving millions of dollars, while the merely rich are donating in never-before-seen amounts. One very rich couple, the Sheldon Adelsons had, as of July 1, contributed $38.6 million US to various right-wing PACS. The Adelsons say they are prepared to spend $100-million this year to support right-wing candidates

This is not the grassroots fundraising using Facebook and Twitter popularized by Obama. This is a blatant attempt by a few very wealthy people to drown out the voices and choices of the many. Worse, many of the Super PACS are not required to disclose the identities of their donors. Former president Jimmy Carter estimates that $6 billion will be spent in this U.S. election cycle, and decries a process he says is “corrupt,” in which the rich foster policies and support politicians that will further enrich them.

Evidence of the corruption in politics lies in how electioneering takes place. Much money will be spent, not on standard TV advertising, but on various exotic campaign techniques of polling, voter identification and — of increasing importance to the Republicans, who have practised it widely — voter suppression. That is, there will be major efforts to confuse or misinform or mislead hostile voters to discourage them from even casting their ballots, or keep them off the voters list in the first place. None of this kind of “retail politics” comes cheap. In several Republican-controlled states, efforts have been made to disenfranchise voters likely to vote Democratic.

What does this kind of campaigning mean for ? We have already seen the robocalls’ scandal, and other efforts to discourage and confuse voters. These techniques will be further developed and expanded here unless Parliament and the courts put a stop to them now.

Enemark is a Vancouver-based public policy consultant.
Posted by arclein at 12:00 AM