The Romney Boom with Lawrence Solomon 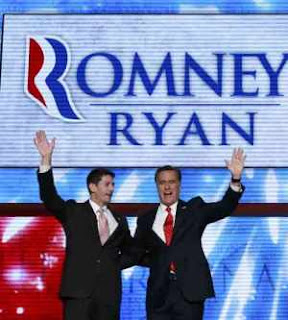 I want you to understand one harsh reality. In the four years of the Obama presidency, economic growth has been almost neutral. This is after thirty straight years of effective 4% growth under all previous administrations. It is about to be followed by strong above average growth over the next four years. It is a nasty picture that every Democrat will have to defend for decades. From now on, the only electable democratic presidential contender will be those with proven economic track records.

Both Democrats and Republicans suffer from what I like to call Big Government Disease or BGD. Often there is little to differentiate between the two as common sense usually rules. Unfortunately. Obama has stepped out a couple of times and must now defend his record against common sense. The real campaign is now underway, and the Republicans will rightly hold his feet to the economic fire. He cannot win.

There is in fact little excuse for Obama's abject economic failures and shortcomings except his own profound economic ignorance. He was the wrong man at the wrong time. Regrettably, John McCain was almost as weak so we lack a plausible might have been also. Instead we got to hold our fire for four long painful years while everybody learned a nasty lesson in why you do not allow brokers to gamble with depositor’s money. Many other things need to be fixed, but that always was important.

We are now 14 years past the structural change that was made under Clinton at the behest of the top handful of banks, all of which have either disappeared or been massively bailed out. Perhaps it is time to ensure we do not have a repeat.

Corporations will start spending once Obama is gone

The Republican National Convention is over. Mitt Romney will now get a bump in the polls, putting him ahead in the presidential race. If he can maintain his advantage and seem a good bet to win — as I believe he will — businesses in the U.S. and abroad will for the first time focus on what the U.S. would look like with Obama gone.

The burden of regulations, rather than relentlessly rising, would immediately stop – on Day One of his administration, Romney would allow no added regulatory costs. The certainty of tax increases under Obama would flip to become a certainty of tax cuts – also on Day One under Romney, the corporate tax rate would drop to 25%. Moreover, the borrowing binge that has given the U.S. a $16-trillion debt and yanked its AAA credit rating would end with Romney, a notorious tightwad. The bloat that is now the U.S. government, at 25% of GDP and rising, would instead deflate to an historic 20% of GDP. To aid this slim-down of government, the federal government would contract out major construction programs to unionized and non-unionized companies alike, whichever was more competitive.

As all this dawns on businesses – and it will dawn on some faster than others — businesses will spring into action and the U.S. economy will awaken, starting with a stock market boom.

That boom may have already begun. Starting in June, as it became clear that Romney would be able to match and perhaps out-compete Obama in raising campaign funds, the Dow has increased by 1000 points – this in the face of data showing that the growth in the U.S. economy slid from a weak 2% in the first quarter to a weaker 1.5% in the second quarter. But whatever the reason for the recent stock market surge, here’s why a Romney recovery could be huge.

As found by the U.S. Federal Reserve in a study of recessions over the last 40 years, recoveries tend to mirror the recessions they follow – the deeper the recession, the steeper the recovery. The Reagan economy’s recovery after the doldrums of the Carter years and the deep 1981 recession saw rapid growth averaging 6% a year. The Reagan recovery also saw one of the great bull markets in stock market history, with the Dow Jones industrial average tripling.

After the deep recession of 2008, in contrast, a strong Obama recovery of the U.S. economy never happened – it was aborted by Obama’s business-unfriendly policies, which led business to stay on the sidelines. The result: The Obama economy grew at one half to one-third the rate seen in the Reagan recovery, despite the massive stimulus spending and quantitative easings and near-zero interest rates of the Obama years. The investment dollars needed to rev up the economy didn’t disappear, however, they have just been parked, out of harm’s way.

The S&P 500 companies alone are sitting on US$5-trillion in cash and many others holding trillions more are champing at the bit, waiting for the all-clear sign before to invest. The sole reason much if not most of that money is on the sidelines comes down to one factor – Obama worries business. Facing a blizzard of known and unknown new taxes and known and unknown new regulations, most businesses can’t plan and even if they could, they can’t be confident of a growing economy into which they can sell their goods and services.


Where will those pent-up trillions go, once Romney lifts the blanket of insecurity that now stifles the economy? Those 500 businesses of the S&P and countless others doubtless have plans in abeyance that they would eagerly pursue. But a Romney recovery would open up numerous new vistas for investment, too, by virtue of his plan to limit federal government meddling in the economy. No area has been more meddled with than fossil fuels.

Coal, oil and natural gas developments have all been stymied by Obama, who has starved them of permissions and bound them in red tape. To make good his pledge of energy self-sufficiency in North America, Romney would unleash the Keystone Pipeline, permit offshore developments on all U.S. coasts, open up and lease federal lands in the interior, encourage coal and fracking of gas, and depoliticize carbon by removing this non-polluting gas from the Clean Air Act’s purview. Energy developments alone would account for trillions in new investments, creating an estimated 3.6 million new jobs while lowering the cost of energy for businesses and households. The vast energy expansion would also yield as much as US$2-trillion in receipts for federal, state and local governments, enabling them to deal with their debts and stay viable.

Under Obama, the U.S. economy has experienced the worst recovery since the Great Depression, one so bad that many believe the economy is headed back into recession. Under Romney, the U.S. economy would soar. Investors are now in limbo, unsure of who will win the November election, unsure whether to dive back into the economy. Some time between now and Nov. 6, they will become sure.