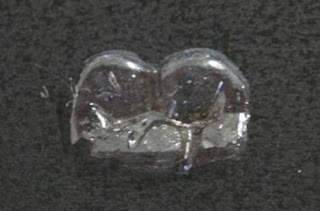 What this means is that the outright replacement of enamel is now plausible and in fact outright likely. While we wait for someone to figure out how to regenerate fresh teeth, this will do nicely for most everyone. If we can also figure out how to prevent abscesses and the death of nerves, then teeth preservation will become the norm into serious old age as wear itself becomes completely repairable.

For my generation who have lived with an ongoing struggle to preserve our teeth after our parent's generation generally gave it up quite early and switched to false teeth this may even be in time to help extend it all some more.

I suspect though that we are about ten to twenty years out to when fresh teeth will be simply regrown and perhaps capped with titanium mesh.

Japan tooth patch could be end of decay

Scientists in Japan have created a microscopically thin film that can coat individual teeth to prevent decay or to make them appear whiter, the chief researcher said.

The "tooth patch" is a hard-wearing and ultra-flexible material made from hydroxyapatite, the main mineral in tooth enamel, that could also mean an end to sensitive teeth.

"This is the world's first flexible apatite sheet, which we hope to use to protect teeth or repair damaged enamel," said Shigeki Hontsu, professor at Kinki University's Faculty of Biology-Oriented Science and Technology in western Japan.

"Dentists used to think an all-apatite sheet was just a dream, but we are aiming to create artificial enamel," the outermost layer of a tooth, he said earlier this month.

Researchers can create film just 0.004 millimetres (0.00016 inches) thick by firing lasers at compressed blocks of hydroxyapatite in a vacuum to make individual particles pop out.

These particles fall onto a block of salt which is heated to crystallise them, before the salt stand is dissolved in water. The film is scooped up onto filter paper and dried, after which it is robust enough to be picked up by a pair of tweezers.

"The moment you put it on a tooth surface, it becomes invisible. You can barely see it if you examine it under a light," Hontsu told AFP by telephone. The sheet has a number of minute holes that allow liquid and air to escape from underneath to prevent their forming bubbles when it is applied onto a tooth.

One problem is that it takes almost one day for the film to adhere firmly to the tooth's surface, said Hontsu. The film is currently transparent but it is possible to make it white for use in cosmetic dentistry. Researchers are experimenting on disused human teeth at the moment but the team will soon move to tests with animals, Hontsu said, adding he was also trying it on his own teeth.

Five years or more would be needed before the film could be used in practical dental treatment such as covering exposed dentin—the sensitive layer underneath enamel—but it could be used cosmetically within three years, Hontsu said.

The technology, which has been jointly developed with Kazushi Yoshikawa, associate professor at Osaka Dental University, is patented in Japan and South Korea and applications are under way in the United States, Europe and China.