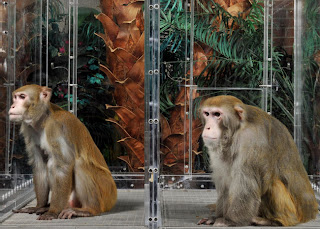 Sorry folks, but science has just done in the well beloved theory of calorie restriction as a natural promoter of a longer life. This experiment was a good as could be devised and it came a cropper.

Weight management in the last trimester of life is strongly indicated as well it should be for lots of excellent biological reasons. For those that care do Google arclein diet.


For 25 years, the rhesus monkeys were kept semi-starved, lean and hungry. The males’ weights were so low they were the equivalent of a 6-foot-tall man who tipped the scales at just 120 to 133 pounds. The hope was that if the monkeys lived longer, healthier lives by eating a lot less, then maybe people, their evolutionary cousins, would, too. Some scientists, anticipating such benefits, began severely restricting their own diets.
Enlarge This Image

The results of this major, long-awaited study, which began in 1987, are finally in. But it did not bring the vindication calorie restriction enthusiasts had anticipated. It turns out the skinny monkeys did not live any longer than those kept at more normal weights. Some lab test results improved, but only in monkeys put on the diet when they were old. The causes of death — cancer, heart disease — were the same in both the underfed and the normally fed monkeys.

Lab test results showed lower levels of cholesterol and blood sugar in the male monkeys that started eating 30 percent fewer calories in old age, but not in the females. Males and females that were put on the diet when they were old had lower levels of triglycerides, which are linked to heart disease risk. Monkeys put on the diet when they were young or middle-aged did not get the same benefits, though they had less cancer. But the bottom line was that the monkeys that ate less did not live any longer than those that ate normally.

Rafael de Cabo, lead author of the diet study, published online on Wednesday in the journal Nature, said he was surprised and disappointed that the underfed monkeys did not live longer. Like many other researchers on aging, he had expected an outcome similar to that of a 2009 study from the University of Wisconsin that concluded that caloric restriction did extend monkeys’ life spans.

But even that study had a question mark hanging over it. Its authors had disregarded about half of the deaths among the monkeys they studied, saying they were not related to aging. If they had included all of the deaths, there was no extension of life span in the Wisconsin study, either.

“This shows the importance of replication in science,” Steven Austad, interim director of the Barshop Institute for Longevity and Aging Studies at the University of Texas Health Science Center in San Antonio. Dr. Austad, who was not involved with either study, said that the University of Wisconsin study “was not nearly as conclusive as it was made out to be” and that the new study casts further doubt on the belief that caloric restriction extends life.

But other researchers still think that it does, and one of the authors of the new study, Julie A. Mattison, said it was still possible that some benefit would be revealed. The study is continuing until the youngest monkeys are 22 years old. While the data pretty much rule out any notion that the low-calorie diet will increase average life spans, there still is a chance that the study might find that the diet increases the animals’ maximum life span, she said.

Meanwhile, some others said that the Wisconsin study made them reluctant to dismiss the idea that low-calorie diets result in longer life.

“I wouldn’t discard the whole thing on the basis of one study, when another study in the same species showed an increase in life span,” said Eric Ravussin, director of the nutritional obesity research center at the Pennington Biomedical Research Center in Louisiana. “I would still bet on an extension of life.”

The idea that a low-calorie diet would extend life originated in the 1930s with a study of laboratory rats. But it was not until the 1980s that the theory took off. Scientists reported that in species as diverse as yeast, flies, worms and mice, eating less meant living longer. And, in mice at least, a low-calorie diet also meant less cancer. It was not known whether the same thing would hold true in humans, and no one expected such a study would ever be done. It would take decades to get an answer, to say nothing of the expense and difficulty of getting people to be randomly assigned to starve themselves or not.

Researchers concluded the best way to test the hypothesis would be through the monkey studies at the University of Wisconsin and the National Institute on Aging, although the animals would have to be followed for decades.

It was a major endeavor. The National Institute on Aging study involved 121 monkeys, 49 of which are still alive, housed at a facility in Poolesville, Md. Those that got the low-calorie diet did not act famished, Dr. de Cabo said. They did not gobble their food, for example, but ate at the same speed as the control animals, even though their calories had been cut by 30 percent.

As the studies were under way, some human enthusiasts decided to start eating a lot less, too.

In those same years, though, studies in mice began indicating there might not be a predictable response to a low-calorie diet. Mice that came from the wild, instead of being born and raised in the lab, did not live longer on low-calorie diets. And in 2009, a study of 41 inbred strains of laboratory mice found that about a third had no response to the diets. Of those that responded, more strains had shorter life spans than had longer ones when they were given less food.

The response to that study was “absolute disbelief,” Dr. Austad said. “Even though the authors are well-respected calorie restrictors, people said the result was not interesting, that there was something weird about the mice.”

Now, with the new study, researchers are asking why the University of Wisconsin study found an effect on life span and the National Institute on Aging study did not.

There were several differences between the studies that some have pointed to as possible explanations.

The composition of the food given to the monkeys in the Wisconsin study was different from that in the aging institute’s study.

The University of Wisconsin’s control monkeys were allowed to eat as much as they wanted and were fatter than those in the aging institute’s study, which were fed in amounts that were considered enough to maintain a healthy weight but were not unlimited.

Dr. de Cabo, who says he is overweight, advised people that if they want to try a reduced-calorie diet, they should consult a doctor first. If they can handle such a diet, he said, he believes they would be healthier, but, he said, he does not know if they would live longer.

Some scientists still have faith in the low-calorie diets. Richard Weindruch, a director of the Wisconsin study, said he was “a hopeless caloric-restriction romantic,” but added that he was not very good at restricting his own calories. He said he might start trying harder, though: “I’m only 62. It isn’t too late.”

Then there is Mark Mattson, chief of the laboratory of neurosciences at the National Institute on Aging, who was not part of the monkey study. He believes there is merit to caloric restriction. It can help the brain, he said, as well as make people healthier and probably make them live longer.