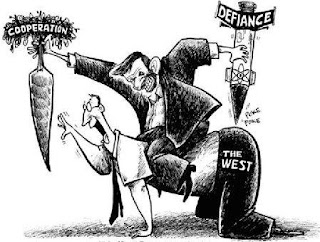 Welcome o the blindness of outright appeasement. It will gain nothing except accelerating body bags throughout the world. Barbarism always mistakes civilization for weakness. Sometimes they are right. Today the toys available are somewhat more serious and the potential for a atomic bomb in their hands is as real as it could ever be. Worse, the potential for a dirty bomb is already real. Just what do you think that Iran is manufacturing?

Now imagine an Improvised Explosive Device loaded with waste radioactives loaded into a container and arriving at a port near you. My point is that even you could in theory pull off the logistics involved and a little insider knowledge could well get you on target.

We are in fact cruising toward a very serious crisis and it is scary. I do not think the real folks are even slightly asleep which is why things keep blowing up in Iran.

Have a nice day!

The White House and media response to the events in the US embassies in Egypt and Libya can be characterized by the fact they speak like they have never seen Sharia mob justice before in their lives. Or, at least, you would think that from the knowledge and wisdom they display in their analysis.

For the last 11 years since 9/11, we have watched the same events unroll in the Islamic world and the same response come from our so-called leaders in the government, media, schools and the pulpits. The establishment view: Those Muslims are extremists, not real Muslims. We should be careful not to offend the religion of peace. When Muslims are offended by movies, Koran burnings and Mohammed cartoons, it is our fault.

The clue phone is ringing, pick it up. Here are the clues:

The murder of intellectuals and artists who criticize Mohammed is Sunna. Sunna is the perfect example of Mohammed’s life. When Mohammed captured Mecca, he first prayed, then he destroyed all religious art and then he issued death warrants for the artists and intellectuals who had opposed him. There are only two new facts in the Koran, a derivative work. The first new fact is that Mohammed is the prophet of Allah, and the second new truth is that if you don’t believe he is prophet of Allah, you can be killed.
Violence is what brings Islam success. In Mohammed’s life, he preached the religion of Islam for 13 years and garnered 150 new followers. When he went to Medina and became a politician and a warlord, when he died every Arab was a Muslim. Jihad violence was what made Islam successful. If Mohammed practice jihad, Muslims must use the technique of jihad.

Hello establishment experts, the black flag is not an Al Qaeda flag. The black flag with the Shahada, “There is no god, but Allah and Mohammed is his prophet” and the swords goes back to the Golden Age of Islam in Baghdad in the 9th century. (The establishment professors never tell you about this jihad aspect of the Islamic Golden Age.) This jihad flag is ancient.

Current news is that Ambassador Stevens was raped before he was killed. If so, then this is pure jihad doctrine. The rules for rape of captured Kafirs (unbelievers) are Sunna. At the conquest of the Jews in Khaybar, the Hadith are explicit that captured Kafirs can be raped.

The mob is a manifestation of the Sharia and the umma (the Islamic community). Notice that when a fatwa is issued, such as the famous fatwa by Khomeini against Salmon Rushdie for his artistic work The Satanic Verses, the fatwa is not to be fulfilled by the Islamic police. No, the murder is to be carried by any member of the umma. This is vigilante justice, Sharia justice, mob justice. Pay attention to how often Muslims riot to make political gain.

The shortest hadith is: war is deceit. So here come all of the “good” Muslims to explain how the murder and riots are not real Islam. And they are so upset about what Arabs are doing at the US embassies. But, they still can tell us that Islam is the religion of peace, without a single trace of irony.

The idea that we should not blaspheme Islam, Mohammed or Allah is pure Sharia and the position of the OIC (Organization of Islamic Cooperation). It seems that none of the establishment experts have the foggiest idea of what Sharia blasphemy entails. Not believing that Mohammed is the prophet of Allah, that a woman is a second class citizen, that jihad is part of Islam is all blasphemy. Critical thought is blasphemy. The Golden Rule is blasphemy. Any well-founded religion can survive blasphemy, except Islam, and that is the reason it is forbidden. But the worst part of this travesty is the refrain from Obama and Hillary that we should subvert our freedom of speech to the demands of the Sharia. The Sharia is Allah’s law and our Constitution is a document of ignorance to be removed from the world. So say the imams and Obama and Hillary.

And now for the last tired response from the apologists: those violent people are an extremist fringe. NO! The mobs are main-line Islam.

You can awaken a man who is asleep, but you will never awaken a man who is pretending to be asleep.
That is the reason that we find our experts in the government, media, education and the pulpits to be such dhimmis. They have refused to learn a single thing about Islamic doctrine and history since 9/11. But, cheer up! When the dhimmis write about the beauty of Islam and how the Kafirs are wrong, read the comments. You will find that the common man knows far, far more about Islam than the experts. The higher you go, the less they know.

Bill Warner, Director, Center for the Study of Political Islam