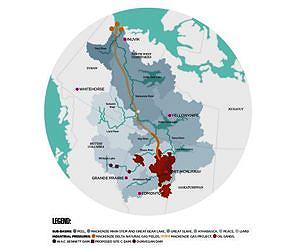 The Mackenzie is one of the last remaining great river basins that has been largely untouched and could be planned out from top to bottom ahead of actual serious development. The oilsands are the threat in place and a serious one but not for reasons properly understood.  They have produced vast reservoirs of mineralized water that we are quite loath to flush down the river itself.  That may still occur, but remediation is the more likely outcome there.

It was one of four great drainages of the North American Ice age and this produced deep sediments I am sure.  in particular is just that and the Beaufort is a shallow mud flat down below the tide and local currents.

If the oil industry continues to be sustained, and I am not optimistic in this regard, then the opening of the basin will plausibly produce a mega field or two.  For that reason alone it is timely to put a plan in place.  Beyond such exigencies, just completing real road access and establishing mining support bases for both the western mountains and the eastern shield country is fully supportable.

The governance of 's massive holds enormous national but also global importance due to the watershed's impact on the , international migratory birds and climate stability, say experts convening a special forum on the topic. "Relevant parties in western have recognized the need for a multi-party transboundary agreement that will govern land and water management in the watershed.

"Successful collaboration will effectively determine the management regime for a watershed covering 1.8 million square kilometers or about 20 percent of Canada - an area roughly three times the size of France - and include the country's vast oil sands," says University of California Prof. Henry Vaux, Chair of the Rosenberg Forum, which meets Sept. 5-7 at Vancouver's Simon Fraser University with the support of the Walter and Duncan Gordon Foundation.

The Forum's goals include identifying legal and scientific principles relevant to the processes leading ultimately to a coordinated basin-wide approach to management, as well as prioritizing knowledge gaps.

The Mackenzie is 's longest river - about 1,800 km - and pours a staggering 10.3 million liters (enough to fill four Olympic swimming pools) into the every second, along with 100 million tons of sediment per year. That's slightly more water than the St. Lawrence River discharges into the , according to estimates.

The includes three major lakes (Great Slave, Great Bear and Athabasca, which together contain almost 4,000 cubic km of water) and many major rivers, including the Peace, Athabasca, Liard, Hay, Peel, and Slave.

Complex challenges confront this immense territory rich in natural assets, which include intact forests, vital habitat for wildlife and for birds that migrate as far as South America, deep stores of trapped carbon, and vast deposits of oil, oil sands, natural gas and minerals.

A 2011 report published by the Gordon Foundation urges the federal government to work with jurisdictions in the basin to implement a world-class water monitoring program and support credible, independent water research.

Through bi-lateral and multi-lateral discussions, 's three westernmost provinces - , and - its and , and the federal government are seeking to set objectives for surface and groundwater quality and quantity, emergency notification requirements, information exchange protocols and dispute resolution processes.

"Anything less than a basin-wide program with strict water quality and quantity standards, backed by binding requirements for prior notification and consultation and dispute resolution, will squander an opportunity to finally give the Mackenzie Basin a governance regime that will protect it for future generations," adds J. Owen Saunders, adjunct law professor at the University of Calgary and former Executive Director of the Canadian Institute of Resources Law.

The refrigerator-like cooling effect of ice and annual snow cover in the northern Mackenzie basin plays a vital role in weather and climate patterns in Canada and throughout the northern hemisphere.

Those new conditions will also increase the prevalence of ice layers, which can increase spring runoff and streamflow but restrict grazing by caribou and muskox.

Expanding shrub cover in formerly open tundra is resulting in warmer air, soils and greater streamflow generation, he notes. The loss of spring snow cover and expansion of shrubs warm the northern air and cause changes in weather patterns and climate throughout the world.

The Mackenzie Delta - where the river meets the Arctic Ocean - is increasingly subject to storm surges from the and salt water intrusion due to three factors: reduced nearshore ice, sea levels rising at accelerated rates, and more frequent severe winter storms. Ecosystems in this productive area will increasingly be affected, and buildings and infrastructure in low-lying areas will be flooded more frequently.

The Forum will also review studies that reveal the economic significance of the Basin, including one completed by researchers Mark Anielski and Sara Wilson in 2009 that estimated the 2005 market value of economic activities in the Mackenzie watershed at $41.9 billion.

At the time, the growing industrial footprint in the region covered about 25.6 million hectares, twice the combined area of 's , and .

The researchers quoted a non-market value of the watershed (ecosystem goods and services provided by nature such as carbon storage, water filtration, water supply and 14 others) of almost $571 billion per year (2005), some 59% of which - $339 billion - was attributed to the storage and annual absorption of carbon by the basin's forests, peatlands, wetlands and tundra.

"If the environmental services of the basin were compromised, the loss would be very large," says Alberta-based water policy analyst Bob Sandford, who notes that climate change is occurring in the north at a rate three times that of the rest of .

He and many scientific colleagues are expressing concern about persistent toxic compounds appearing in aquatic ecosystems of the , most derived from air pollution. 's David Schindler and colleagues have shown that atmospheric emissions from oil sands developments are significant contributors to contamination of waters in the .

These contaminants are transported by wind and deposited on snow, land and tree needles, eventually washing into rivers and lakes.

The Forum will consider recently announced Canadian government measures to monitor and mitigate oil sands-related pollution.Objectives for the Forum:

To identify and summarize pertinent scientific principles and findings that should be acknowledged in processes leading to a Mackenzie River management agreement, as well as pertinent legal principles that may apply, and to address the following questions:

1. What is the state of scientific knowledge of the ? What are the major scientific questions to be addressed to ensure that the waters and lands of the basin are managed in a way that protects their integrity? To what extent does scientific uncertainty need to be addressed and specifically acknowledged in any transboundary agreement? What does science tell us about the continental and global significance of the basin?

4. Is it possible to revamp existing cooperative governance structures for the Mackenzie Basin so as to build upon rather than infringing upon the jurisdictions of the federal, provincial, territorial and indigenous governments? Are there examples where this has been successfully accomplished in a federal system? Are there examples of where it has been attempted but failed to work effectively?

5. Could an existing layer of government or a regional governmental entity be given regulatory authority related to the purely basin-level aspects of such overarching issues as climate change, cumulative environmental impacts, as well as transboundary indigenous treaties and governance agreements?

Wednesday, September 5th will be devoted to "fact finding." On that day, senior provincial and territorial officials as well as researchers working in the have been invited to make presentations.

Thursday, September 6th and Friday, September 7th will be devoted to deliberations of the panel and the development of conclusions and recommendations.