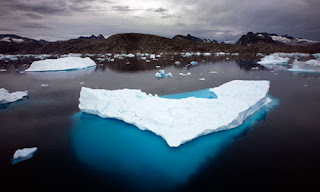 The media is getting excited again over our rapidly disappearing sea ice which blew past the 2007 record and bettered it by 500,000 square kilometes to hit a total of 3,400,000 sq kilometers.

In fact my prediction of 2007, before the record was particularly apparent then has been powerfully confirmed as the Arctic sea ice has now clearly entered its terminal stage of breakup and collapse. It is quite reasonable to expect almost all winter ice to melt out each summer well before the end of the decade.

We also have hard confirmation that this has been brought about by a warm water distribution shift into the North Atlantic from the Southern Hemisphere. Understand that this has nothing to do from imagined global warming or CO2 production.

The media of course will continue to babble about the end of the world as we know it.

It is quite plausible though that we may return to Bronze Age conditions. We have certainly seen a recovery of Medieval Warm Spell conditions. This all fits well with a thousand year cycle brought about possibly by a strong variation in the flux of cold waters into the Deep in the Antarctic. That is the one thing that I can identify as having the real power to do all this. Major aspects of these waters are in fact changing. Whatever is happening, the circumpolar current is drawing a lot less heat and the ice is expanding there.

The result has been to dump surplus heat into the north Atlantic for the past forty years or so. This has now destroyed or weakened all the multiyear ice in the Arctic setting up the present collapse. 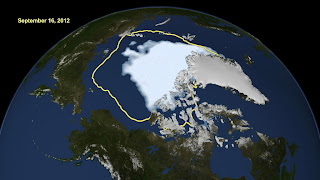 When David Barber first headed to the Arctic in the 1980s, the ice would typically retreat just a few a kilometres offshore by summer’s end.

Now he and his colleagues have to travel more than 1,000 kilometres north into the Beaufort Sea to even find the ice.

And it’s nothing like the thick, impenetrable ice of Arctic lore.

This year the ice is “rotten” practically all the way to the North Pole, says Barber, a veteran Arctic researcher and director of the Centre for Earth Observation Science at the University of Manitoba.

“The multi-year ice, what’s left of it, is so heavily decayed that it’s really no longer a barrier to transportation,” he says, explaining how melt ponds have left much of the ice looking like Swiss cheese.

“You could have taken a ship right across the North Pole this year,” says Barber, whose research team was involved in a 36-day research cruise in the Beaufort on a Canadian Coast Guard ship.

The Arctic ice loss this summer shattered the record set in 2007. It hit the low point last weekend, covering 3.41 million square kilometers, or 24 per cent, of the Arctic Ocean, according to the U.S. National Snow and Ice Data Center, which has been tracking the ice with satellites since the late 1970s.

While the ice loss documented by the NSIDC is record-setting, Barber says the reality in the Arctic is ever worse.

The U.S. numbers are about “a 15-per-cent over-estimation of how much ice is actually there,” says Barber. That’s because satellites have trouble discerning ice conditions, he says, and will count heavily decayed ice as solid.

Regardless of who is doing the counting, he and other scientists consider the ice loss remarkable. And they say the impact will be felt far beyond the Arctic.

“It’s a globally significant change on our planet,” Barber said in an interview.

Many expect the Arctic could be “seasonally ice free” in the summer within a decade.

At that point the planet will be without its icy dome for the first time in eons.

A recent study that looked back 1,450 years indicates the current Arctic ice melt has already eclipsed the medieval warm period of about 1,000 years ago.

“The level that we are at now is unprecedented over the last 1,450 years,” says Barber. “And as far as we know we have to go back over a million years to find a period when the Arctic was seasonally ice-free in the summer.”

The Arctic melt is also happening faster than at any time in the planet’s past, says Barber, noting that the geological and historical records indicate it took tens of thousands of years to move to a seasonally-ice-free Arctic in the past.

“Now we are getting there in tens of years, not tens of thousands of years,” he says. “And we don’t know how the Earth is going to respond because we have never seen such a rapid change before.”

Environmentalists and scientists were quick this week to call for cuts in greenhouse gas emissions to slow the global warming that is melting the ice.

“The scientific community realizes that we have a planetary emergency,” said Hansen. “It’s hard for the public to recognize this because they stick their head out the window and don’t see that much going on.”

“We can see very viscerally in the ice how warming temperatures are changing the Earth’s environment,” Walt Meier, of U.S. NSIDC told a media briefing this week.

He and other researchers say the Arctic melt is just the tip of the iceberg.

Rising global temperaturess are  also transforming northern ecosystems, melting permafrost and shattering ancient ice shelves. Giant icebergs from the disintegrating shelves are now sailing through Canada’s Beaufort Sea, creating a new hazard for oil rigs, says Barber, whose team is involved in national and international efforts to get a read on the new Arctic reality and it implications.

Global warming is also altering the oceans. More warm, salty water from the North Atlantic is flowing in the Arctic, and may be helping speed up ice melt.

Another concern is rising sea level. Arctic ice is already in the ocean so does not raise sea level when it melts. But the extra heat being absorbed by the Arctic Ocean due to the ice loss appears to be accelerating melting of the Greenland ice sheet, which does raise sea levels.

The growing expanse of open Arctic water, which traps a lot more of the sun’s heat than reflective ice, is also altering polar storms and winds, says Barber. And this in turn may be linked to the increasingly strange and extreme weather seen from New Orleans to Newfoundland.

Statistical evidence suggests the changes in the Arctic are slowing the jet stream and pushing it further south, leading to more “persistent” climate patterns – be it rain, drought or sunshine, he says. The challenge now is to understand the physical mechanism.

”Our society, our civilization and how we live our lives – it’s all predicated on a stable climate system,” says Barber, who notes that the planet has undergone abrupt climate change in the past and could do so again.

“The take-home message for people is we are running an experiment with Earth’s climate system,” says Barber, and greenhouse gases are contributing to enormous  change – like melting Arctic ice –  that is happening much faster than anticipated.

one of the world's leading ice experts has predicted the final collapse ofArctic sea ice in summer months within four years.

In what he calls a "global disaster" now unfolding in northern latitudes as the sea area that freezes and melts each year shrinks to its lowest extentever recorded, Prof Peter Wadhams of Cambridge University calls for "urgent" consideration of new ideas to reduce global temperatures.

In an email to the Guardian he says: "Climate change is no longer something we can aim to do something about in a few decades' time, and that we must not only urgently reduce CO2 emissions but must urgently examine other ways of slowing global warming, such as the variousgeoengineering ideas that have been put forward."

These include reflecting the sun's rays back into space, making clouds whiter and seeding the ocean with minerals to absorb more CO2.

Wadhams has spent many years collecting ice thickness data from submarines passing below the arctic ocean. He predicted the imminent break-up of sea ice in summer months in 2007, when the previous lowest extent of 4.17 million square kilometres was set. This year, it has unexpectedly plunged a further 500,000 sq km to less than 3.5m sq km. "I have been predicting [the collapse of sea ice in summer months] for many years. The main cause is simply global warming: as the climate has warmed there has been less ice growth during the winter and more ice melt during the summer.

"At first this didn't [get] noticed; the summer ice limits slowly shrank back, at a rate which suggested that the ice would last another 50 years or so. But in the end the summer melt overtook the winter growth such that the entire ice sheet melts or breaks up during the summer months.

"This collapse, I predicted would occur in 2015-16 at which time the summer Arctic (August to September) would become ice-free. The final collapse towards that state is now happening and will probably be complete by those dates".

Wadhams says the implications are "terrible". "The positives are increased possibility of Arctic transport, increased access to Arctic offshore oil and gas resources. The main negative is an acceleration of global warming."

"As the sea ice retreats in summer the ocean warms up (to 7C in 2011) and this warms the seabed too. The continental shelves of the Arctic are composed of offshore permafrost, frozen sediment left over from the last ice age. As the water warms the permafrost melts and releases huge quantities of trapped methane, a very powerful greenhouse gas so this will give a big boost to global warming."