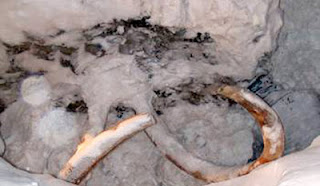 The plausibility of restoring the mammoth has just become completely convincing. These are not inexperienced eyeballs and way more important, having the content of a defined cell that is intact clearly opens the door for outright cloning using an elephant egg. Somehow or the other it is going to be done and actually done often.

The idea that the cell is actually alive does begger our imagination, but we have restored living plant cells already, so why not?

The point is that we are on the way to having baby mammoths and shortly thereafter the hunt will be on for the whole Pleistocene menagerie. It will be very exciting to watch.


A team of paleontologists said they have found “living” mammoth cells in remains discovered in the Far East that could be used to clone the ancient mammal.
But some scientists expressed skepticism regarding the find, saying they doubted living cells had been found and questioned why such a significant discovery had not been announced in a scientific journal.


A hundred meters under the permafrost in the Ust-Yansky district of Sakha, an international expedition called Yana-2012 found soft tissue, fatty tissue, fur and bone marrow of mammoths, expedition leader and Northeast Federal University researcher Semyon Grigoryev said Friday, according to a news report posted on the university's website.


Head of the Korean Sooam Biotech fund Huang Vu-Souk said the “living” cells that were found could be used for cloning, the news report said. An unidentified member of the expedition team said findings from the expedition would be published in authoritative scientific journals.


A scientist from the Institute of Paleontology at the Russian Academy of Sciences said he doubted that living cells, which he described as emitting carbon dioxide and processing nutrients, had been found so deep in the permafrost.


“Thus far there haven't been truly living cells in any of the mammoths [found] — a complete DNA sequence has not even been able to be obtained,” head of the mammals laboratory at the Institute of Paleontology Alexander Agadzhanyan told RIA-Novosti.


Agadzhanyan's colleague at the Institute of Paleontology Alexander Markov told the news agency that in serious scientific practice, such major discoveries are announced not in the media but in research journals.


Northeast Federal University is studying the genome of ancient animals under an agreement signed earlier this year with the South Korean Center for Biotechnical Research. One of the project's central tasks is cloning a mammoth.


Remains of mammoths, which went extinct about 4,500 years ago, are occasionally found in the permafrost of Russia's northern regions.


Earlier this year, a team of Russian scientists led by a researcher from the Russian Academy of Sciences conducted a groundbreaking experiment in which they produced an entire plant from fruit tissues found in the permafrost. The scientists said the experiment opened the door to the resurrection of other ancient species.

"Remains of mammoths, which went extinct about 4,500 years ago." Reason. The people living in that area killed them for food. I hope that they have already started the cloning process as I would like to see one of these creatures before the end of the world gets here.