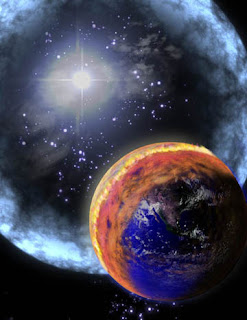 This item somewhat discusses the daunting engineering challenge involved in destroying a sun. It takes the idea of impossible to a new dimension.

However, if one could create a black hole, almost by definition it would need to be locked out of our space time in order to contain its effects. In that mode it may become plausible to insert such a device into a star to initiate a rapid conversion of matter to photonic energy which would swiftly blow the star apart.

I suspect that the lock out device is a possibility and that provides a possible containment system to form a black hole. Ouch! Of course it would take stellar energies to pack up a contained black hole I think.

In science fiction, planet-busting superweapons are all the craze. Yet even more terrifying than the ability to destroy a planet is the wherewithal to take out an entire star. The sun Crusher in the "Star Wars" Jedi Academy novel trilogy serves as an example of such a godlike device.

Overall, solar annihilators are rare compared to plain ol' world-enders, indeed scaling with the inherent difficultly of star-killing, at least from a modern physics and technology standpoint. [Planet-Destroying Superweapon]

The dastardly deed is theoretically possible, however, and even on time scales not stretching into millions of years. "There's one scheme to me that seems not quite plausible, but it's close," said Mike Zarnstorff, an experimental plasma physicist and deputy director for research at the Princeton Plasma Physics Laboratory. Read on to find out how future Dr. Evils might hold a whole solar system for ransom.

Destroying a star poses two major problems. For one, the kinds of stars that would typically host habitable planets are colossal, both size- and mass-wise. Our sun, for instance, spans 865,000 miles in diameter, can store about a million Earths in its interior and sports a mass of approximately two octillion metric tons. (That's a two followed by 27 zeroes.)

Secondly, stars are hot. Just look at how hot the sun is, and it’s middle-of-the road: The sun's corona, essentially a stellar "atmosphere," blazes at around 1.8 million degrees Fahrenheit; the far-cooler surface still roasts around 10,000 degrees Fahrenheit.

The composition of a star is a related issue. Stars are simple spheres of superheated gas, or plasma, roiling about in balance (for most of their long lives) between gravitational collapse and the buoyancy of energy-releasing fusion reactions. Stars, in effect, are made to chug along, and in our sun's case for more than 10 billion years.

"Stars are really big and have a lot of inertia," or resistance to a change in their state, "and that inclines them to keep doing what they're doing," said Zarnstorff.

Given stars' size, temperature and composition, traditional armaments such as metal-encased thermonuclear bombs would not phase them in the slightest. [Top 10 Ways toDestroy Earth]

Could a star's self-powering fusion reactions somehow be "poisoned?" Zarnstorff does not see a plausible means of doing so.

Stellar fusion involves the smashing together of hydrogen atoms into deuterium and tritium (hydrogen's two isotopes), then on into helium, lithium, and so on down the periodic table. Only the most massive stars, however, which have the hottest, densest cores can fuse all the way to iron. (These relatively short-lived stars provide poor environments for life to develop on hosted planets.)

The fusing of iron nuclei, however, requires more energy than the reaction unleashes. The metal, along with nickel, piles up, progressively robbing a giant star of the energy needed to prevent it from collapsing in on itself. The star eventually does just that, exploding into a Type II supernova.

Scrambling a star like our sun into blowing up, shutting down or changing its reaction rate (and thus size and temperature) is conceivable. But good luck finding enough material to knock the sun off-kilter.
"Even if you swept up all of the planets in the solar system" and dumped them into the sun, Zarnstorff said, "the sun wouldn't really notice at all." Altogether, the eight planets and other solar system debris including the asteroid belt compose not much more than a thousandth of the sun's mass. [Greatest Explosions Ever]

Another conceivable method to slay a star would be to evaporate it, essentially. Stars constantly emit heat, light and particles into space, with the latter known as the solar wind. The mass loss from the solar wind is negligible. Increase the wind to a gale, though, and the star would diminish.

Stars vary wildly in their solar wind outflows, Zarnstorff noted. Further study of the mechanics behind faster flows could show how calm stars might grow gusty.

Perhaps bolstering the production of sunspots, along with their associated bursts of particles in flares and so-called coronal mass ejections, would move things along. "You can imagine changing the dynamics of the solar surface to promote sunspots," Zarnstorff said.

Nevertheless, even if some sort of gargantuan magnetic field generator could pull it off, evaporating a whole star would likely take millions of years. Not exactly an effective doomsday weapon, then. [10 Failed Doomsday Predictions]

Instead of trying to overcome the size and mass of a star, a heinous sci-fi supervillain would be wise to work with these properties. Therein lies the least implausible means of destroying a star and within a reasonable length of time: using a black hole as a sort of implosion bomb.

A black hole launched into the sun would "feed and grow exponentially," Zarnstorff told Life's Little Mysteries, and therefore would "self-propel" a star towards its doom. "A black hole could suck in all the mass of the sun," Zarnstorff said.

Not just any black hole would suffice, however, unless the hole could somehow be created within the sun itself. The catch is, black holes theoretically evaporate due to a phenomenon known as Hawking radiation (named for famed physicist Stephen Hawking).

An incredibly tiny black hole with the mass of a car, say, would survive for perhaps a billionth of a second; hardly long enough to traverse the distance from an origin point to the sun. Zarnstorff thinks a black hole more toward the mass of the Moon – though still merely a millimeter in "size" – might do the trick.

Even so, the creation of a diabolically useful-sized black hole is still far beyond our capabilities; it's possible that micro black holes could be produced in the Large Hadron Collider near Geneva, Switzerland, but these would vanish within billionths of a billionth of a second.