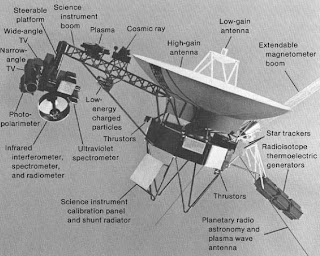 A nice item on Voyager.  The upshot is that we may be feeling the effects of the sun for years to come, although that seems unlikely.  We are traveling opposite the direction of rotation so we are heading into the natural flow however slow that may be.

Perhaps we have learned as much as we were to learn this time around.  It is also possible that we do not understand the real nature of deep space and are simply unable to recognize it.

In short, our assumptions may have already been tested and found wanting.

Mankind's messenger at the final frontier

It looks like a dustbin lid strapped to a cluster of fishing rods. Its computer is so puny it could not even start up your iPhone. And if E.T. wants to listen to the message it brings, he'll need a gramophone to play it on.

But in the history of space exploration, there is not a probe that can touch the glittering career of Voyager 1, mankind's first messenger to the cosmos.

Thirty-five years after it was launched, the doughty explorer is on the brink of leaving the Solar System and heading into the deep chill of interstellar space.

More than 18 billion kilometres (11.25 billion miles) from home, Voyager is still yielding terrific science as it battles through the last fringes of our star system.

"It is providing us with extraordinary data, with precious information" about the structure of the Solar System, said Rosine Lallement of the Observatory.

Voyager was launched on September 5, 1977, a few weeks after its sister scout Voyager 2, and the pair carried out a magnificent tour of all the giant planets -- Jupiter, Saturn, Uranus and Neptune.

Afterwards their missions were reconfigured so they would fly to the edge of the Solar System, and then beyond, into the utter unknown.

Speeding outwards at more than 17 kilometres per second (38,000 miles per hour), at a distance from where the Sun appears the size of a dot, they bear messages for any passing extraterrestrial.

They are "the two most distant active representatives of humanity and its desire to explore", says NASA.

There is also a 30-centimetre (12-inch), gold-plated copper record (http://voyager.jpl.nasa.gov/spacecraft/goldenrec.html), along with a cartridge and a needle to play it with.

The record holds 115 images of life on Earth, recorded in analogue form, and a variety of sounds and snatches of music, from singing pygmy girls, Mozart and Bach to Javanese gamelan and Chuck Berry playing "Johnny B. Goode".

And there are spoken greetings from Earthlings in 55 languages, beginning with Akkadian -- a language spoken in Mesopotomia about 6,000 years ago -- and ending with the Chinese dialect of Wu, also including Hittite, Latin and Welsh in between.

In 2004, Voyager 1 crossed a point known as the "termination shock", where the solar wind -- the particles blasted out by the Sun -- start to collide with particles that come from beyond the Solar System.

This is the start of a turbulent zone called the heliosheath, which cedes to the last region of all, the heliopause, where the solar wind eventually peters out and interstellar space begins.

Right now, Voyager 1 is in a transition zone, says Robert Decker of in , in a study published in Nature on Wednesday of charged particles called plasma, monitored by an on-board instrument.

"The spacecraft may be making short excursions across the heliopause into the interstellar medium and back again due to, say, small fluctuations in the position of the heliopause," Decker told AFP in an email.

Other scientists agree that the fringes of the Solar System could be somewhat elastic, varying according to energy output from the Sun.

When will Voyager 1 cross the great boundary?

"It's hard to imagine that it's going to be too much longer, but I can't tell you if it's days, months or years," Ed Stone, in charge of a Voyager instrument that measures cosmic rays, said at a conference in Pasadena, California, on Tuesday.

But what a milestone it will be.

"Crossing into interstellar space -- that will be a historic moment when the first object launched from Earth finally leaves the bubble," said Stone.

Voyager 2, launched on August 20, 1977, is 14.8 billion kms (9.25 billion miles) from the Sun, heading through the heliosheath in a different direction, according to NASA.

In the absence of solar energy in deep space, the two Voyagers are powered by long-life nuclear batteries.]

In 2025, the batteries will die and their voices will be stilled forever.

But the two probes will carry on their mission, to whatever strange fate awaits them.