Generational Effects of BPA and Other Selected Chemicals 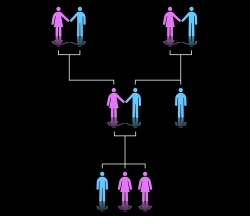 Skipping BPA which is problematic but enjoys a serious lobby for both sides, the unrecognized problem is that a range of artificial and natural chemical substances do modify the genes.  This effect survives the removal of the agency.

Worse, the effect can also be passed on as inheritance.

For that reason the acceptance protocol of any chemical regime into the human biome needs a major overhaul.  Toxicity is the least of it and has been a manageable risk anyway.

It would not be too surprising that this effect underlies the natural advent of allergic reactions.

The good news, if we want to call it that, is that effects are generally subtle and have to be coaxed out.  Thus errors are likely to be often benign rather that crippling.  Perhaps we will have a rerun of the radiation issue in which low level exposure triggers a powerful corrective response that actually lowers risk factors.

In the meantime do make sure you representative of the people understands all this.

Keeping it in the family: BPA’s effects might last in our bodies for generations

Back in May, I pointed to a study on a farm chemical that was found to cause physiological and behavioral changes in rats. Worryingly, the effects persisted for generations after a single exposure (it was the first time this phenomenon was extensively documented in an industrial chemical). In an email at the time, one of the study authors said, “Many other environmental compounds promote these types of phenomena … Future science and policy needs to consider such phenomena and mechanisms.”

It looks like he was right. Now, another study has found evidence of multi-generational effects of exposure — in this case, to that ubiquitous endocrine disruptor you love to hate: bisphenol A (BPA). The research appears in the peer-reviewed journal Endocrinology and was conducted by a team of scientists from the . Its title says it all: “Gestational Exposure to Bisphenol A Produces Transgenerational Changes in Behaviors and Gene Expression.”

There are several interesting (and ominous) aspects of this new research that should give us all pause. The first is that researchers looked specifically at genetic effects. The previous study I cited examined behavioral and physiological effects alone. And yes, the scientists found evidence of genetic alterations from BPA exposure. But the truly significant aspect of the study comes from the fact that the researchers replicated in mice the low-level, chronic exposure that humans experience in their day-to-day lives. It was this level of exposure that caused the genetic and behavioral changes they saw.

Try not to get scared. I dare you.

Of course, we’re well past the days of waiting for a “smoking gun” on BPA. The federal agencies in charge of chemical safety, the EPA and the FDA, have repeatedly set the scientific bar very very high when evaluating the need for a BPA ban. New York Times columnist Nick Kristof (who dug up the new BPA study [PDF] in his latest column) blames the chemical industry, or as his title expresses it, “Big Chem, Big Harm?”

And yes, a good part of the problem with chemical safety is due to the industry’s influence over and successful lobbying of the agencies which regulate it. But much of the EPA’s and FDA’s toothlessness has been literally written into law. In a small morsel of good news, Kristof notes in his column that the Senate committee in charge of chemical regulation for the first time passed The Safe Chemicals Act (aka the Kids-safe Chemicals Act). Sen. Frank Lautenberg (D-N.J.) has been trying for years to move this bill that would update decades-old law and change the way the government regulates chemicals.

Among its many changes, the bill shifts the burden of proof from the government to the companies wishing to commercialize a chemical. Even more importantly, it would force a company to prove a chemical’s safety, rather than its potential for harm. It would in essence enshrine the concept of the precautionary principle into American law. It’s already a part of European Union law that a chemical can be regulated or banned when “scientific evidence is insufficient, inconclusive, or uncertain,” i.e. when it has not been proven safe. And that’s why the phrase “chemical X (already banned in )” is such a familiar refrain in articles about toxic chemicals.

It’s a change in regulatory approach that we desperately need. The evidence mounts every day that our collective health depends on it. And yet, even in the unlikely event that the full Senate passes the bill, the House would need to act on it. And given that the GOP-led chamber is prone to pass bills to stop the EPA from doing things it’s not actually doing, I don’t think anyone should hold their breath for House passage.

That said, the blame is not entirely on the Republicans. The time to have passed legislation like this was during 2009-2011, when the Democrats enjoyed filibuster-proof majorities in Congress. If it wasn’t on the agenda then, it’s hard to imagine that it would become so even in the unlikely chance the Democrats both retake the House and hold on to the Senate.

For now, we have to hope that the independent research continues — and that the scary results it generates make it to the public. It certainly appears that the deeper independent researchers dig, the more damaging the results they find. Indeed, a new study that found dangerous levels of the toxic plastic component phthalates — linked to birth defects, early puberty, infertility, asthma, ADHD, obesity, and diabetes — in 75 percent of children’s school supplies was what it took to get Sen. Chuck Schumer (D-N.Y.), one of the members of the Senate leadership, to back Lautenberg’s bill (hey, maybe it does have a chance!).

Kristof points out that the National Institutes of Health is prioritizing research into transgenerational effects of industrial chemicals, which is very promising. But if climate change has proved anything, it’s that even when reality is staring them in the face, politicians can remain stuck in denial.

Good thing it’s just our genes and our children’s genes on the line.

EDITOR’S NOTE: The headline on this article has been edited to clarify that BPA itself does not “last in our bodies” but its effects (according to the study Tom Laskawy writes about) do.